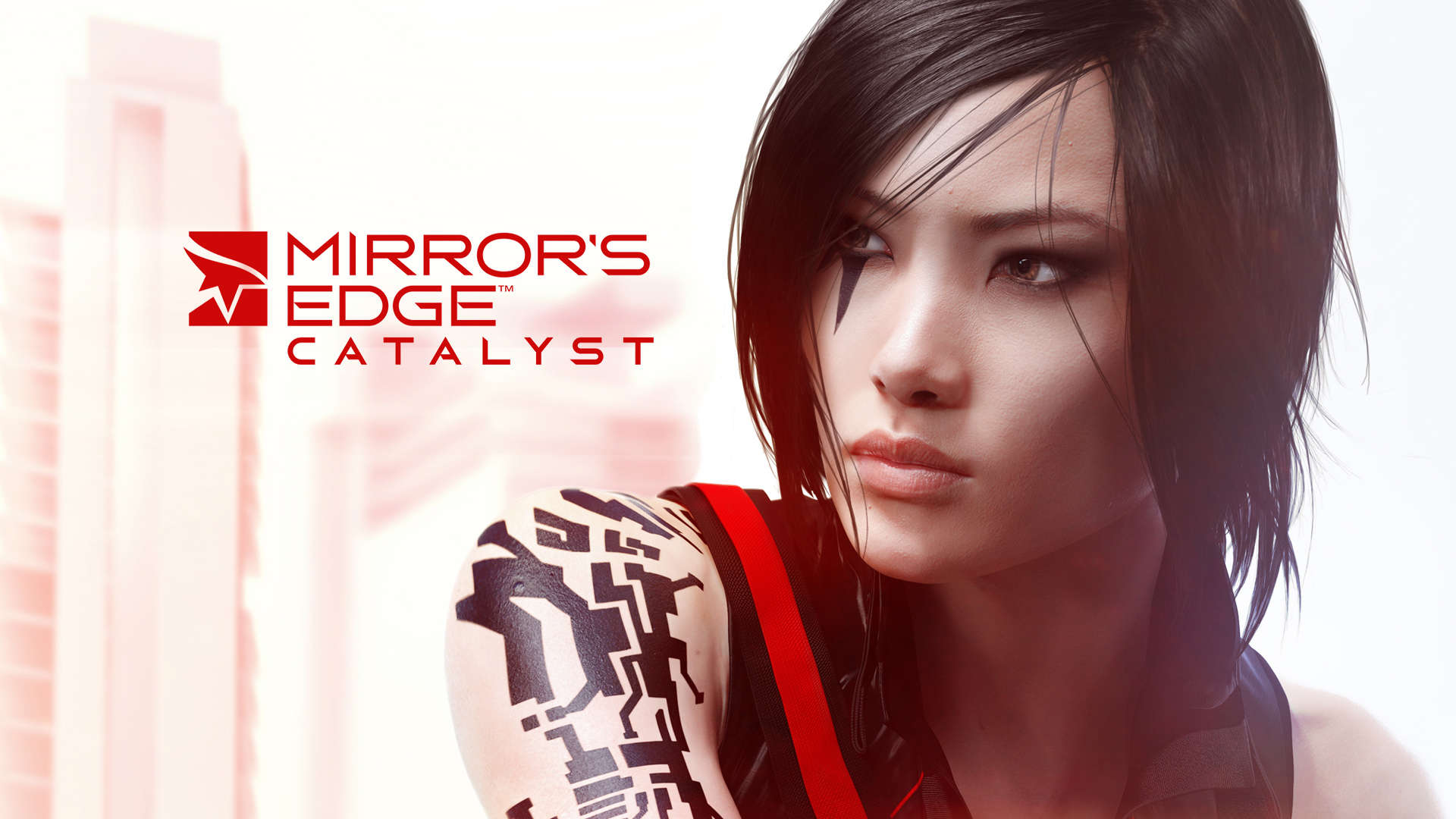 Mirror’s Edge: Catalyst could easily be my favourite game of the year. The whole idea of the game is what captivates me, it’s sleek, fast and immersive! Back in 2008, EA published Mirror’s Edge, a first-person parkour game that made waves in the media as a first of it’s kind, however, it’s financial success never caught up with its critical acclaim. The concept of the game was entirely unique but the mechanics were clunky and awkward while the gameplay was linear and restricting.

Mirror’s Edge: Catalyst tackles this issue head-on. The game is entirely open world allowing players to explore the whole city, a feature that was severely lacking in the previous entry. Faith has a map with plenty of markers on it, full of things to do: time trials, side missions, and of course a swath of collectables to find. The main storyline takes roughly 7-8 hours to hammer through, but going back and finishing all the other tasks can easily double that number.

It’s important to note that Catalyst is a reboot, not a prequel. The original Mirror’s Edge exists in another timeline altogether, the events of which could be overwritten. During Gamescom last year, EA DICE confirmed that Catalyst is indeed a reboot and not a prequel as earlier speculations have led to believe. Speaking to IGN, Design Director Erik Oeldahl said:

Mirror’s Edge: Catalyst is a reboot. We basically took the things we really liked about the first game. Faith, first and foremost, the first-person free-running gameplay, and also the aesthetics, which we’ve built on, of course. But it’s a reboot.

Oeldahl went on to say that the game tells the story of Faith’s origin.

We’re telling Faith’s origin story, so the events of the first game actually don’t really exist. Maybe they will at one time in the future.

Mirror’s Edge: Catalyst opens up with Faith Connors, the protagonist of the game. Faith has just been released from juvenile detention and is met by fellow runner, Icarus. Exiting the prison gets the basic movement controls out of the way. Icarus brings you to a nearby safe house where you meet Noah, leader of the runners. If you have read up on the comic series, Mirror’s Edge: Exordium, these characters will all be familiar to you. The storyline doesn’t really recap on Faiths story prior to juvy other than a few references that would only be picked up by someone who has done their homework. 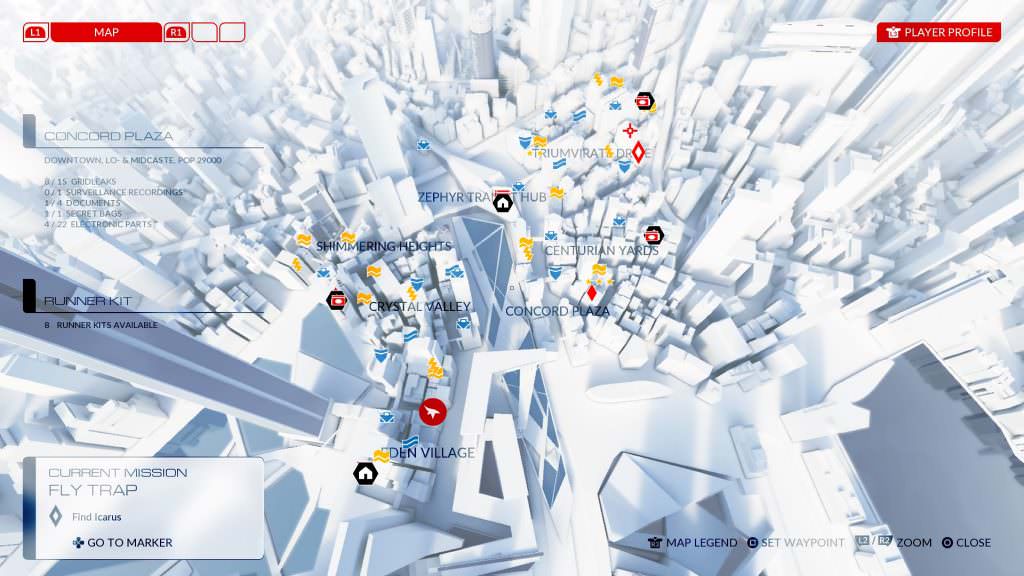 The premise behind Mirror’s Edge: Catalyst is to get from point A to point B as quick as possible. This gets easier as you progress through the game, unlike the original you are given a skill tree with unlockable upgrades such as drop-roll and quick-turn. Catalyst also adds new equipment such as the MAG Rope, which can help get to hard to reach places and can be upgraded to include a grappling hook.

One of my favourite additions to the game was the introduction of Gridnode’s. These are giant data centres which act as a way of unlocking fast travel in a new are of the map, similar to a viewpoint in Assassins Creed or a watchtower in Far Cry 4. Simply put, a Gridnode is a giant obstacle course. There are 4 in total and the goal is to reach the top of a large cylindrical chamber and access a security panel without tripping ANY alarms. 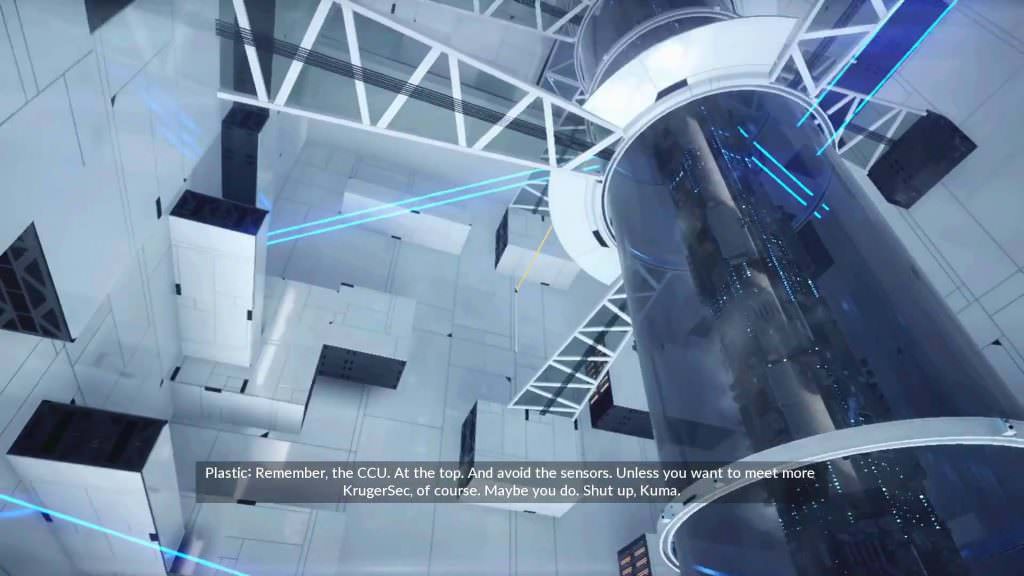 This is one of the most immersive parts of the game. The minor swaying movements Faith makes as she moves around makes you feel like your actually there climbing this tower and at times I nearly felt sick, I had to take a moment to look around me and breathe. Have I mentioned that I’m terrified of heights? This is the first time a game has affected me like that too, I mean,

This is one of the most immersive parts of the game. The minor swaying movements Faith makes as she moves around makes you feel like your actually there climbing this tower and at times I nearly felt sick, I had to take a moment to look around me and breathe. Have I mentioned that I’m terrified of heights? This is the first time a game has affected me like that too, I mean, ive played most of the assassins creed games but again, that’s one of the benefits of it being a first-person view, it’s much more personal. 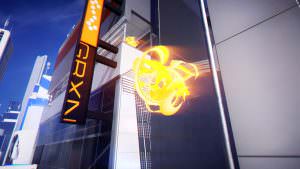 The level design is another major achievement from DICE. As I said before, the main aspect of this game is running, so the fact that the whole world is a seamless transition from one building to another makes the experience beautiful. Aside from the main missions there also time-trials, side missions, hidden runner caches and these strange golden globes called “gridLeaks” that boost your experience points. Running around completing all the different challenges is nearly as fun as the main game itself. The great thing about Catalyst is that there’s no pressure to really do anything, you could just run through the city for about an hour honing in your skills and taking in the beautiful scenery.

The storyline is surprisingly rich in content, the characters are well developed, the dialogue during cutscenes is on point and the voice acting is up to extremely high standard aiding the immersion into the city of glass all the more. I love the varied personalities of the different characters and its clear that a lot of time went into developing these characters so that they stand out. 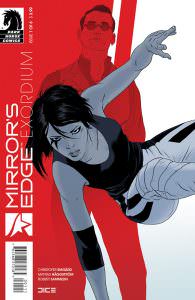 As I said earlier, if you haven’t picked up the Mirror’s Edge Exordium comics you probably won’t know much of each character’s backstory, especially when meeting with the character Drögen. There are 6 comics in total and add a lot of depth to the character of Faith and those that she associates herself with.

The audio quality of games have greatly improved in recent years and Catalyst is a testament to that. The way the sound changes with the environment is incredible, there is nothing better than running along a rooftop with the sounds of drones zipping by and then rushing into a room and being engulfed by sound. The attention to detail is one of the game’s best aspects, and it aids the immersion perfectly.

The one thing that has definitely carried across from the original game is the clunky combat. This time around, Faith will be unable to use any weapons whatsoever relying solely on her parkour skills. There are upgrades available which include a disruptor to stun enemies, flying kicks and quick movements called “shift”.

There are five types of enemies: Guardians, Protectors, Shock Protectors, Enforcers and Sentinels. Each have their own specific skill sets, but Shock Protectors and Enforcers are the ones that can absorb the most damage, making them the most frustrating to deal with. The game does feature a clever system where Faith can temporarily dodge bullets by building up momentum, but when you’re actually forced to stand and fight, the lack of attention that went into combat rears its ugly head.