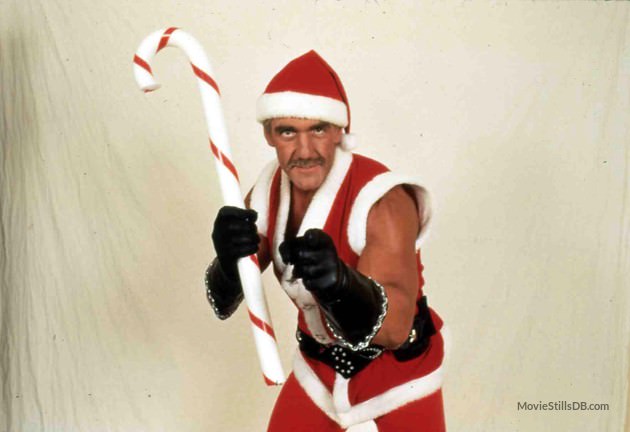 Ah yes, Christmas is upon us once again. A time of giving, reflection and, this being the most important, indulgence! Never mind all the charitable arse, everyone’s favourite thing about Christmas is overindulgence. We eat too much, drink too much, sit in a quiet corner contemplating where it all went wrong…er, too much. It’s the one time of the year where you can revert back to childhood innocence and embrace everything that makes it such a magical time of year. Favourite foods, smells (not the sprout kind), drink, games and movies are plentiful and yet, there is a darker side to Christmas. For as many much loved classics can be found on TV, there is also utter tripe to wade through. So, prepare to have Christmas ruined on you for the second time *wink,wink* as the Best/Worst Series guides you through five of the very worst Christmas movies of all time..

Where to begin? Larry the Cable Guy and WWE Studios, says it all really. For those of you who don’t know, Larry the Cable Guy has made a career out of being not that all that funny, entertaining or likeable (think Cian Twomey) and WWE Studios churns out more crap than the Ganges. Even more unforgiving is that it tarnishes the reputation of my favourite Christmas movie of all time (spoilers) Jingle All The Way. It’s a quick copy and paste of the original, without any of the charm or wit.

“According to the Book of Claus, Santa, Satan’s only son l-” Hang on, what? Yes, in this rather naff Santa slasher flick jolly ol’ Saint Nick (Bill Goldberg) is a boozing, violent and womanising (ho,ho,hoes) lunatic who just so happens to be hell bent on killing as many people as possible during the festive period. It comes close, very close in fact, to falling under the “so bad that it’s actually good” category but misses out due to the fact that Fran Drescher and her annoying laugh make an appearance.

Ask anyone what their favourite part of The Nutcracker is and chances are they’ll say “oh the bit where Einstein’s nephew gets turned into a wooden toy by the Nazis under the command of a rat-like Andy Warhol”, I know it’s my favourite part anyway. Someone somewhere, got paid a handsome amount of money and honestly thought what they came up with was a good idea. Maybe it was, at one stage. But it doesn’t quite know what the hell it’s meant to be. Part family fantasy, part ‘too deep for you, man’ and don’t even get me started on the shark. If you want to ruin a child’s Christmas (and life), this is the movie for you.

Professional wrestlers aren’t having the best of outings on our list so far. Nonetheless, I remember seeing Santa With Muscles as a kid and it’s been downhill ever since. It’s one of those movies that you can point to when people say that the 90’s was the best decade for film and music because my god, it sucks something awful. The premise is, dastardly multi-millionaire Blake (Hulk Hogan) is on the run from the cops and dons a Santa suit in order to lay low. However, soon succumbs to amnesia and is convinced he is Santa. The most remarkable thing about this movie is that they managed to stretch it out to a whole 97 minutes (of nothingness) and Mila Kunis seemed to do ok out of it.

No you didn’t read that wrong, that is the actual title of the movie. I mean, just trying to describe this in any way, shape or form is causing me to have a breakdown of sorts. Right, basically Santa has been kidnapped by aliens and is forced to build a high-tech toy factory on Mars (because reasons), all the while some Gandalf looking fellow tries to help the jolly man in red. However, Santa and his army of slave children manage to defeat the Martians by using the spirit of Christmas cheer. Ugh. I worked in a cinema a few years back and we actually played this two years in a row over Christmas and you may surprised that such a fine sounding movie had a complete attendance figure of Z E R O. Besides, you know a movie hasn’t aged well when they still refer to Eastern Asia as ‘The Orient’.

There we have it, five festive stinkers to envy that of your granny after a Guinness and sprout dinner. Be sure to check back to Elite Gamer as we take a look at some of the far better offerings cinema has given us at this time of year.