No, this isn’t a promotional tie-in for the restaurant of the same name, nor is it the board game of the same name. This is Pizza Express! Possibly the most in-depth pizzeria management game available on Steam right now. Niche market, I know but credit where credit is due.

Pizza Express puts you in the shoes of… well, yourself. You work for Gastone Oncilla. Gastone’s father once ran a successful restaurant but that’s gone down the toilet in recent years so Gastone’s looking to start his own successful pizzeria. Sort of an elaborate story for a pizzeria simulator, right? And that’s just the beginning. See, there’s this other guy, VIT. VIT has a restaurant across the street and his is the best restaurant in town and there’s a poisoning and a crazy gastroenterologist and a disco ball. Maybe I’m getting ahead of myself. So, what exactly is Pizza Express? In short, it’s a management sim. You set the names and prices of pizzas in your restaurant, decide the opening hours, the décor, tables available. It’s surprisingly detailed. When you’re not managing the books or hiring advertisements you’re in the kitchen putting together pizzas. The kitchen management aspect of the game is very similar to other restaurant management games (there’s a weird sub-genre) like Cook, Serve, Delicious or Diner Dash. 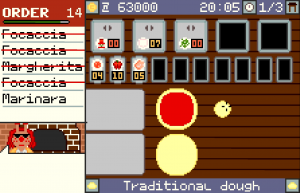 One of the more unique elements of Pizza Express is its story. For a management sim it’s got a ton of story. In fact, there are times when it feels like the story is getting in the way of the game. The amount of time spent watching characters talk amongst themselves almost feels Kojima-esque at points. It’s not a bad story by any means, most of the characters are interesting and unique and they add to the story, it just would have been nice to get to play the game a little more often. This brings me to another criticism of the game – OH MY GOD THE TUTORIALS.

Don’t get me wrong, it’s fantastic that this game tutorialises all of its features. The game honestly wouldn’t be the same if I didn’t know how to manage group discounts for the restaurant or advertise on the radio every morning but be ready to receive tutorials for at least the first two hours. In fairness to the developers, Onni Interactive, tutorialising a management sim is a massive challenge, I just think it could have been handled better – even if it meant extending the tutorial into the fourth hour to makes sure the player gets to engage with the core gameplay more often. Realistically I prefer this to the Sim City approach, i.e. “good luck, guy” but it starts to feel like a slog after the first hour. The amount of text you’re expected to read isn’t made any more tolerable by the pixelated retro font, though a more modern/readable font wouldn’t lend itself to the aesthetic as well. Speaking of which, if you’re into the retro aesthetic, this does it pretty well. I’m personally burnt out on it but in this case it looks quite nice. There are spots where it gets a little grading – particularly in certain menus, but other than that it’s perfectly serviceable. The music on the other hand is stellar. If you like chiptune music then this game’s soundtrack is basically essential listening. It’s all available online too at Onni Interactive’s website. Most of it is even royalty free. Aside from that, the game allows you to add your own music which will play while you’re working the kitchen, hence this.

All in all Pizza Express is a fun management sim that could prove horribly addictive if you’ve got the time to invest into it. I’d be surprised if this game never made it to mobile platforms because it’s so perfectly suited to a tablet. It’s exactly the type of game I could see myself spending hours fiddling with on the train or the bus. Even on PC though, Pizza Express is a great example of what indies are producing these days, even if it can be a little bland at times.