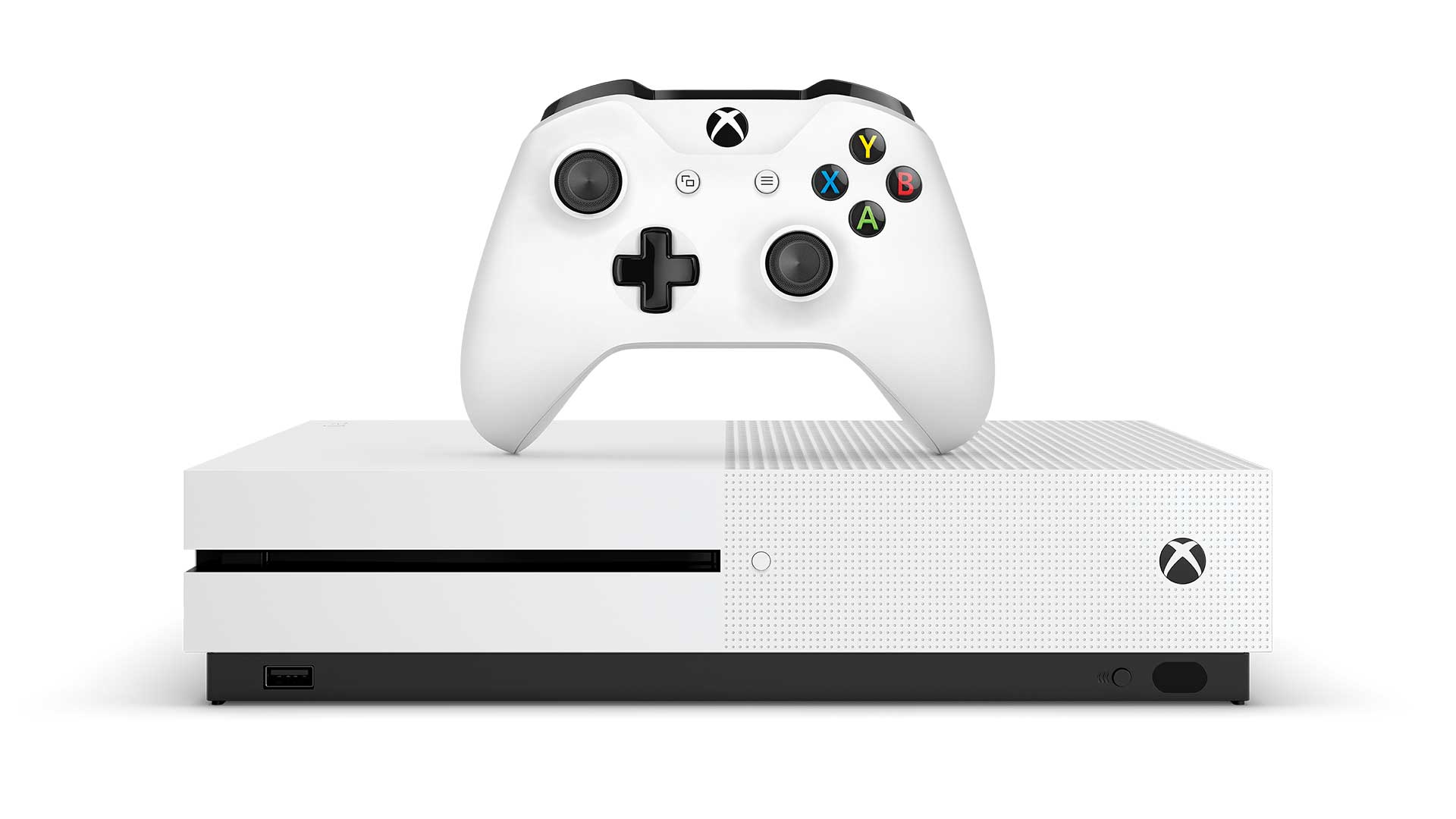 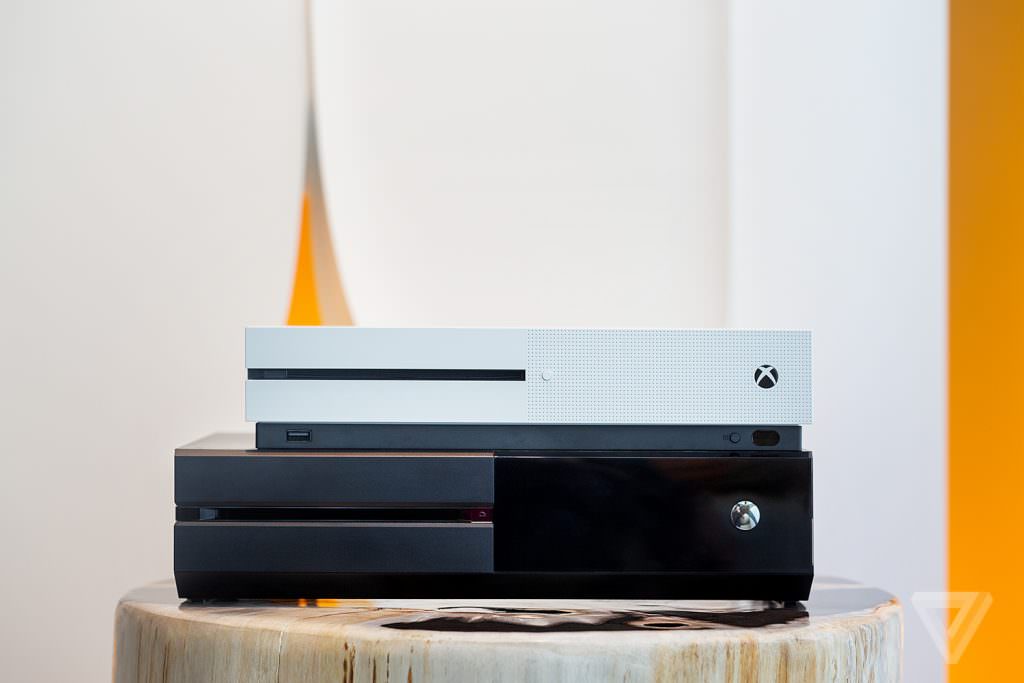 It may be hard to believe that it’s nearly 3 years since the Xbox One released. Before that, my 360 had been replaced by the Slim version with a shiny gloss finish, far quieter noise output (remember those fans and the disc drive on the original?!) and a built in wireless adapter. The first gen Kinect also had a dedicated port but remembering back to that, maybe the less said the better – I still have the theme to Disney’s Kinect Rush in my head!

And so there is little surprise that at this weeks’ E3, the Xbox One S was showcased and, as you can see from the header picture, has a bit of a redesign. Firstly, the dimensions are considerably smaller, approximately 40% in terms of physical space being used up by the current behemoth. The colour change to white with the right side gloss finish being replaced by a textured mesh-look (fan intake on either side) should stop those fingerprints being so apparent for those that love perfection. All the ports on the back are condensed down alongside the move of the left-hand USB, sometimes less-than-handy for your charging output, being moved to the front of the console instead. And for those that have missed the option for keeping your console in the vertical position, a stand is also included – pictured below. 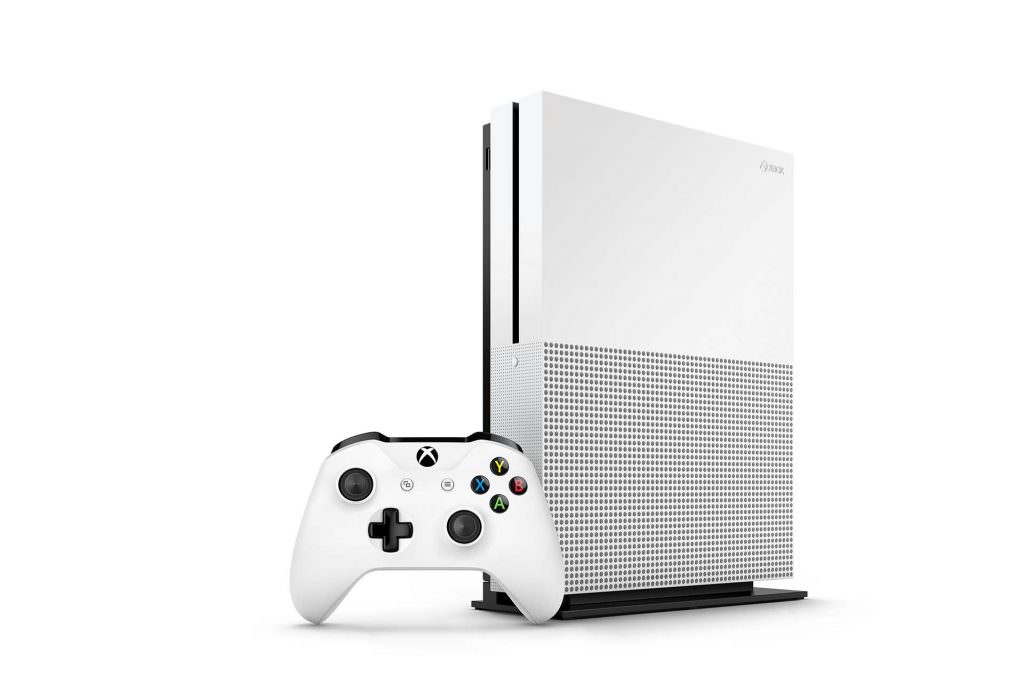 What about hardware changes? Well, as with any “updated” versions of the console don’t expect your games to look any better, but there are some worthwhile additions. But let’s start with a subtraction in that the big “power brick” is no more – cheers all round #highfive! Without spamming this article with loads of screenshots, the unboxing below shows that we no longer have to make space for that black brick of doom, and regular noise with the integrated fan that came with it. If you’re wanting a 4K video output for your TV the S includes this too and, considering you’d be lucky in purchasing a 4k Blu-ray player for under €100, the current RRP of €299 for the 500GB Xbox S (€349 for the 1TB, €399 for the 2TB) could be attracting more than us gamer types. The new controller is also including the popularity that the Lunar version has introduced with the textured backing for additional grip.

If you’re a fan of the Kinect though, you’ll have to look into getting a usb adapter as it’s not included in the newer version. Whether it was just to keep it as small as possible or if it’s another visible step to the Kinects’ demise only time will tell, but it’s not news that the backtrack on how good it is, how it should be and with the lack of Kinect features in newer games could see the end of voice commands until it gets that much better.

What may also put you off is that this is NOT the Scorpio console, due to be released next Fall. Although the specs on the Scorpio are minimal (addition of being VR ready) with it being only a year after the official release of the Xbox One S may deter many on having to buy a third console within the space of four years.

Of course I want one, but whether I can afford one with the possibility of further upgrades next year will you? Let us know in the comments!