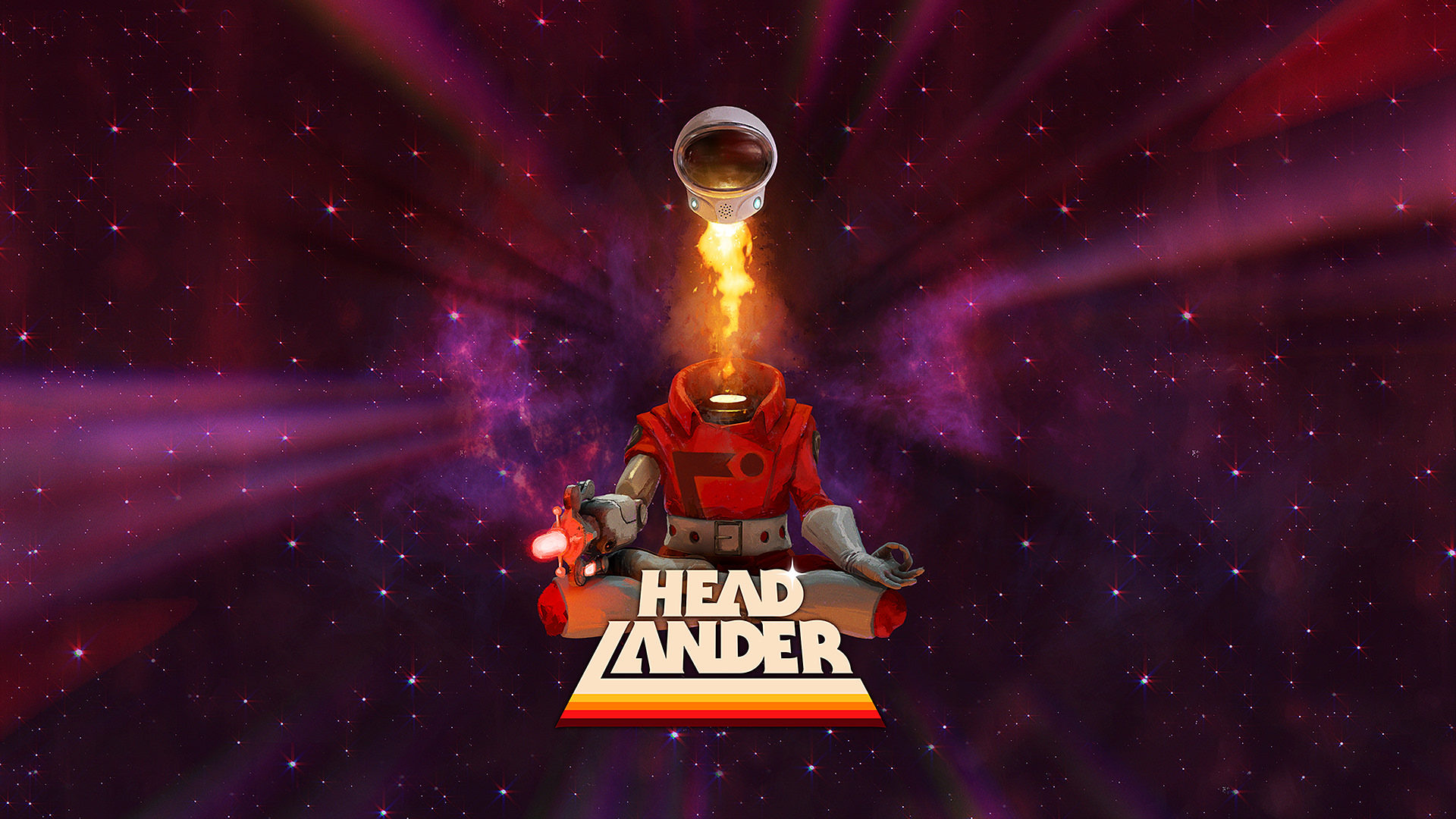 Adult Swim and Double Fine are known for making some pretty… let’s call them “unique”, games over the years. Because of this, I was a bit hesitant to even check Headlander out. After some coercion from the internet, I decided this one may be worth checking out. It has some of my favorite elements that I need present for me to play a game. An artsy style, clever dialogue, and tight controls.  Head Lander has most of that but when I say “clever” it’s more like desperate at best. The game is funny at times but it’s never what you would call hilarious. Which is something many people have said about it prior to its release. 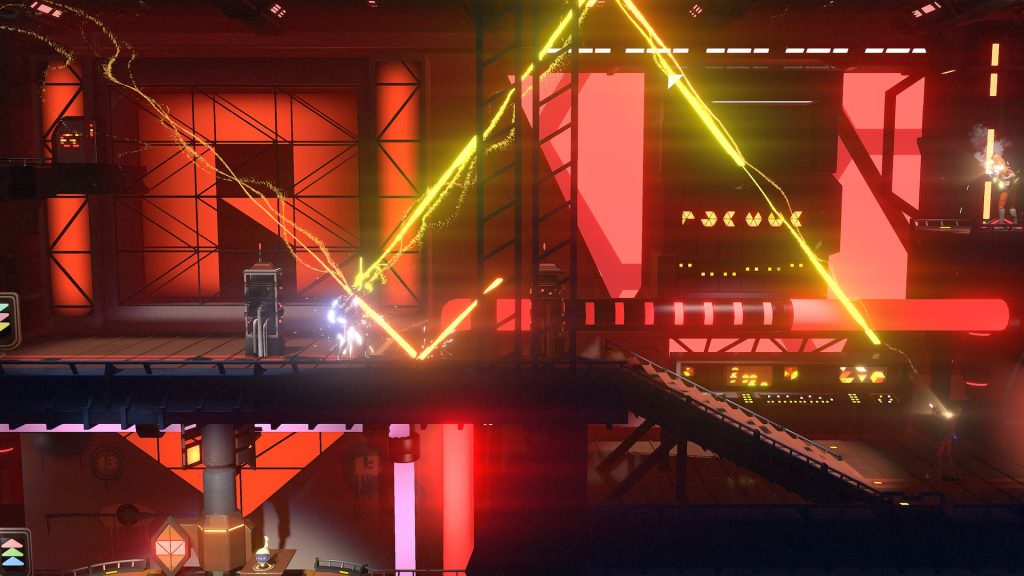 Headlander takes place in the distant future and you are the sole survivor of humanity. You’re also the only organic matter left in the galaxy as everyone else has had their consciousness transferred into automatons. Great concept and its executed rather well in this game. You find yourself as just a head when the game begins and as such, it’s rather difficult to maneuver through some areas, despite the fact that you are rocket powered. Out of the gate, you are roped into a resistance movement against the titanic overlords of this world in an effort to get humanities, “humanity” back.

Your disembodied head makes its way throughout the world by way of body snatching with the help of this weird vacuum mechanic. Each body you latch onto has a different ability most of which are just different styles of laser beam weapon. As fun as this was, there were points in the game where it became impossible to tell whose lasers were whose and because of this, I exploded. I exploded a lot. The game a very small RPG element by way of skills. Skills are obtained by collecting enough of these weird floaty plasma whisps to gain ability points.

The skills do things like improve your thrust, your attack power or you vacuum hole. It’s honestly my favorite part about the game because I love collecting and farming to power up my characters no matter what I’m playing. 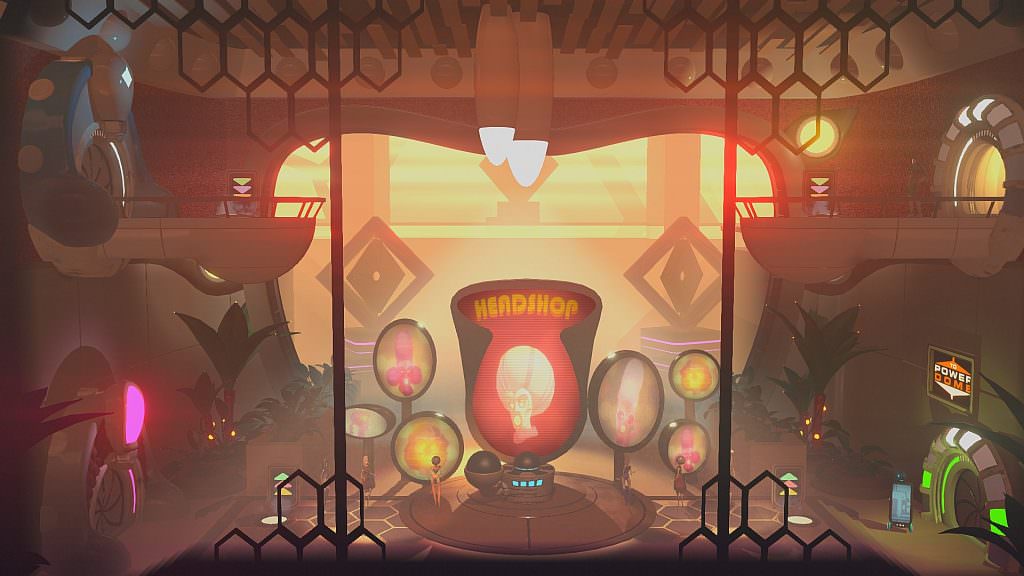 After spending about fifteen hours getting lost, helping robotic citizens and playing with lasers, I can say this. I am completely indifferent towards this game. I don’t hate it, but I certainly don’t care for it either. That’s okay though because I understand who this game appeals to and for those people this title is probably a knockout.

Something I did really enjoy about headlander was the way that it handled puzzles. While they were challenging, it never felt overwhelming or frustrating. Most puzzles worked like this. There are certain robots that are colored (purple, red, green, blue) and a few others. Each one of those colors correlates to a security door color and would only open if the correct body was present or the correct color laser was there. It’s an interesting way to hand this Metroidvania style gameplay and I really thought it gave the game something special. 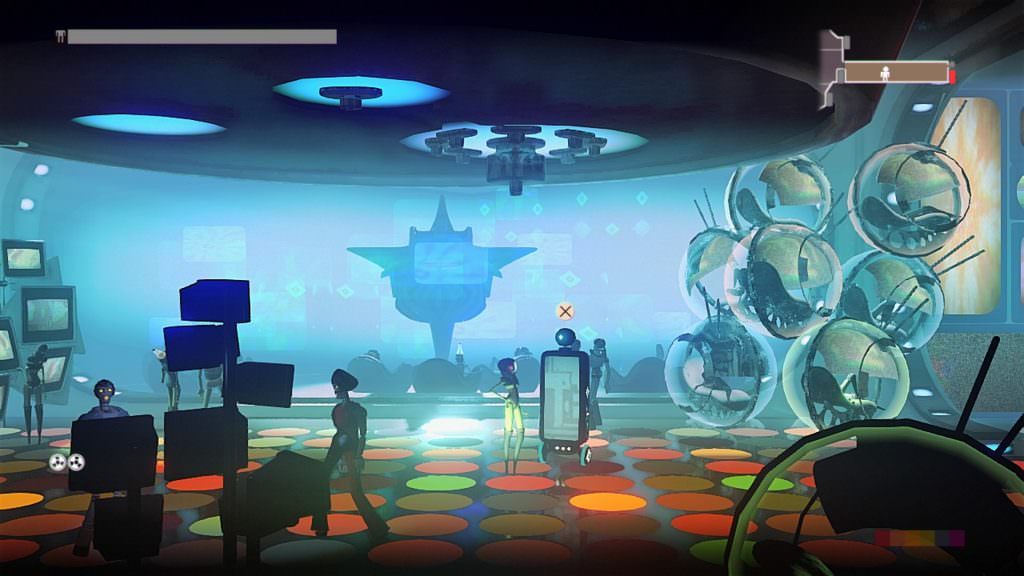 The different enemy bodies contain different types of weapons. While all are lasers, they come in different styles, colors, and strengths. A fair few of them only shoot one laser but soon you start finding ones that shoot spread shots and once that will bounce significantly more than others. Things can get insane, fast and when they do prepare to be switching bodies a lot.

Like I said before, Headlander makes a lot of attempts at being hilarious but it never really hits its mark. Sure a lot of the things people say are funny but it’s not something I would run out and tell someone about. A lot of the game’s humor comes from referential humor, unfortunately, it’s things that you would only notice if you were a fan of sci-fi flicks from the 1970’s. I feel like there aren’t many people like that around these days, at least not ones that would be playing video games.

Headlander is a game that’s worth checking out if you’re into that kind of thing. It’s even worth playing if you enjoy Adult Swims absurd style of comedy. Just don’t expect a great deal of replay value. The game can be finished 100% in about 9 hours. This is mostly due to a few side quests and secrets that become available to you after you complete the main game. If you’re just looking for the basic story then you can finish this in about 5-6 hours. 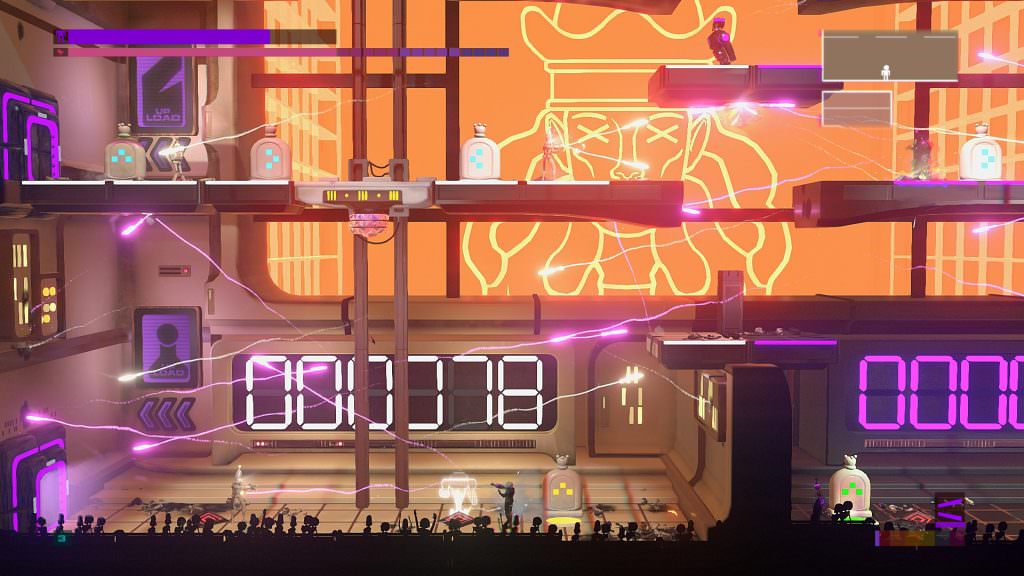 My suggestion is to check it out for a cheap laugh but don’t expect too much from the game overall. If I’ve confused you as to my feelings about the game it’s only because I don’t really know myself how I feel about this game. I’m honestly completely indifferent to its existence and I don’t think that’s how you’re supposed to feel after playing a game.