BIOSTAR has released a motherboard for the upcoming AMD RYZEN processor. This new motherboard is a second-generation board from BIOSTAR called the RACING X370GT5. The X370 features network optimization with FLY.NET and DRAGON LAN for an online gaming experience that is way up there! It will a LED fun zone using 5050 SMD LEDs to light up your system from directly on the board. The chipset will also allow unlocked RYZEN CPUs to release its full potential and get the maximum performance.

The X370 features dual BIOS, the point of this is that if something happens to your BIOS you have a complete backup on a separate BIOS chip so you can flash back to the stage where your BIOS worked. This means no more losing everything if something happens to your BIOS. This particular dual BIOS also allows you to have two different versions of BIOS on each BIOS chip. Along with their GT touch feature allows you great control over your motherboard. The GT touch feature are buttons on the motherboard like power and reset. Some versions allow you to turn on an eco mode which would use less power for when you are not gaming. This allows for quick control. It also allows you to create desk computers (Making a PC into your desk) and not have to worry about power buttons typically found on the case. Other buttons I have seen on the GT touch are frequency overclocking up and down. And clock multiplier up and down. This allows for very quick modification without having to load up the BIOS and change things that way.

FLY.NET and DRAGON LAN create the ultimate gaming solution by detecting the best settings for your bandwidth and give priority to the resources that need it. This means you will have an ultra-smooth gaming experience with low latencies and an extremely stable network connection. 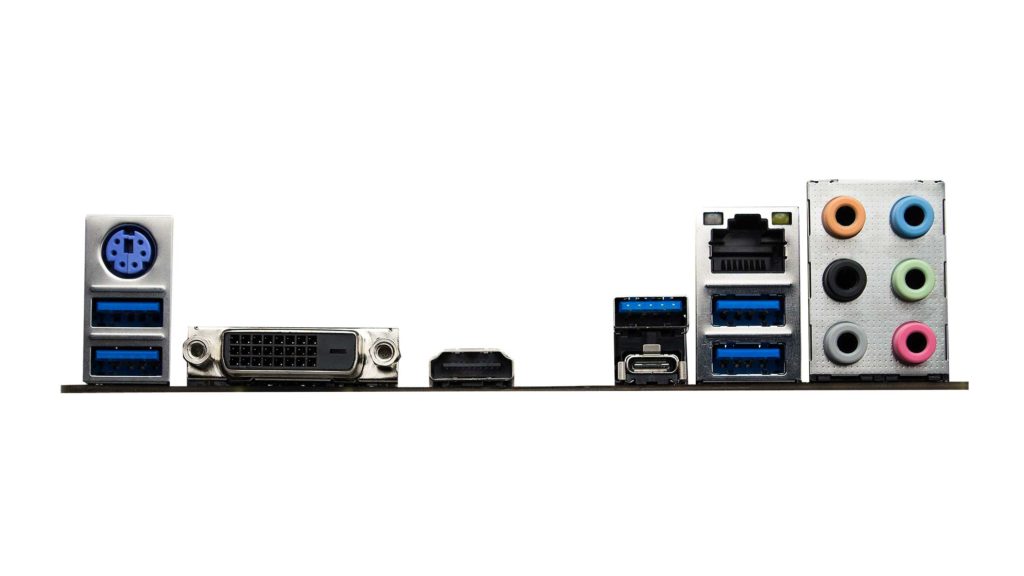 The I/O panel has a legacy PS/2 port, four USB 3.1 ports and one gen 2 USB 3.1 port, along with a gen 2 USB 3.1 type – C port for much faster data transfer. There is onboard graphics with the option of DVI or HDMI 4K2K for 4 times the resolution of full HD, or at twice the resolution of full HD with 2k. There is an onboard Ethernet port and onward sound with 6 audio ports.

There are many audio perks with this board. The hardware coupled with the software gives you great quality and performance. There is an onboard amplifier giving you a much more powerful sound compared to other boards. The X370 also supports Blu-Ray audio to provide the higher output of 24 bit/ 192KHz. Normal motherboards only offer 16 bit/ 48KHz. The board uses a special ground line to isolate analogue signals from the digital source. This eliminates interference for a crisp clear sound. Non-Polarized Electrolysis Electric audio capacitors are used for each audio channel. These capacitors deliver low noise, low distortion and wide bandwidth to create a wonderful sound experience for the immersive games!

The Type – C USB port is a welcome sight as I personally love these ports. The fact that the cables are fully reversible is enough for me to love them, apart from the fact that they transfer data faster than regular type – A cables and offer up to 50% speed on charging devices over type – A cables. The PCI-e M.2 port allows for the ultra-fast M.2 SSD to be used for super quick boot times if you just want to load the OS onto the SSD.

Of course being a motherboard made for the AMD RYZEN with the AM4 socket it will be using DDR4 RAM, DDR4 is much faster than DDR3 as well as having a higher module density and a lower voltage requirement leads to much better RAM.

The board itself utilises super durable ferrite choke which allows for higher current capacity and lower energy loss for better power stability, super durable solid caps are solid state capacitors which doubles the lifespan of the capacitor. The PCB itself is moisture proof which is good for people living in damp houses or near a river, sea etc. It also comes with surge protection which is a must for all PCs regardless of whether or not they are gaming rigs. This is achieved by having the latest model of “Transient Voltage Suppressor” on-board to protect the board from ESD (Electrostatic discharge) as well as overvoltage from outside sources etc. Even the LAN is protected from surges from lightning strikes and other electrical surges.

The X370 allows for customisation by having a LED fun zone. The Vivid LED DJ allows you to control and modify the colours of the LED on the MOS heatsink and the edge of the board. You can even have them react to music that is plating and have other LED effects, including Normal, Eco and Sports mode. This makes for a pretty cool motherboard. There are also two 5050 LED headers for even more lights!

Here is a full specifications sheet directly from BIOSTAR’s website to avoid any misinformation: