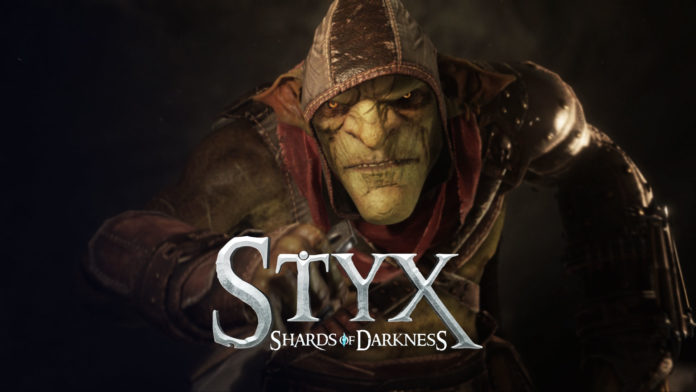 Styx: Master of Shadows appeared at the end of 2014 and was later offered for free via PlayStation Plus. We were officially introduced to the greedy, blunt and humorous master thief-goblin named Styx. Now two years later, Styx is back in Styx: Shards of Darkness, which immediately goes after the events of the previous game.

Styx is back and takes everything on heel

The game starts when the Tower of Akenash collapsed, which happened during the last moments of Master of Shadows. Styx doesn’t give up his old life and goes on again in search of trouble. Although goblins are usually portrayed as dirty, crawling and hideous creatures, Styx stands out. For one thing, he is capable of speaking, which sets him apart from other goblins. This was already the case in Master of Shadows by his hilarious observations between missions and developer Cyanide expands further in Shards of Darkness. The result is that even when you have died multiple times, you do so with a smile on your face.

The dialogue that Styx is given is quite blunt and crude, but it suits his character and that lifts the character development to a higher level. One of my favourite parts of the game are the post-death scenes where Styx breaks the fourth wall by barraging the player with abuse. This takes the form of satirical Shakespear adaptions, sarcastic remarks or straight up calling the player out. Click the images below to view them full-size.

Steal and murder your way through the story

I don’t want to give too much of the story away, but the bottom line is you play as Styx exploring a world where you can see the direct consequences of the Green Plague. At the end of the Master of Shadows, Styx creates a highly intelligent clone to aid him. The clone then breaks their telepathic bond, destroys a tree and leaps into a lake of amber (the yellow stuff that gives Styx his powers). Hordes of goblins emerge from the amber and destroy Styx before heading out and wrecking everything they encounter. This forced other races to act with an iron fist by creating a squad called CARNAGE (Combatants for Attacking, Reaping, Neutralising and annihilating all goblins to be Eradicated). At the very end, another clone of Styx emerges from the amber with an equally high intelligence as original Styx and no memory (Other than knowing his name is Styx). This is the Styx we start off within Shards of Darkness.

Unprecedented freedom in your approach

Players of Master of Shadows will feel right at home in Shards of Darkness, missions have multiple variations to how you can approach each objective. Players can choose different strategies, assassins or thief, each with their own consequences and rewards. That being said, it’s near impossible to run around the level completing all the side objectives while remaining undetected and I take my hat off to anyone who can do so without killing a single NPC.

The structure in the game remains the same. Each mission consists of several areas where you can find items. These items can be used to craft tools and weapons, something that is now further enhanced compared to the previous game.You can create bolts and bottles of acid for killing enemies or potions for when your health is low. Maybe not too spectacular or daring an addition, but in a stealth game like this, it’s an option that is more than welcome. Furthermore, Styx still has an arsenal of traps, weapons and items you can unlock by spending your skill points in different skill trees at your hideout.

The freedom you get in approaching your target is partly due to the level design. In Master of Shadows the levels were already extensive and had you everywhere or trails that lead to different places. In Shards of Darkness, Cyanide does no different and the levels become more complex. This gives both newcomers and experienced players plenty of opportunities to get started. Compared to the original the developers know how to surpass themselves in this area because it offers a lot of variety of gameplay thanks to the countless routes you can take.

For those who prefer to take the stealthy approach, Styx is able to hide under tables, go through crawl spaces, slip into vases and wait for your enemies pass or explore the situation and patterns of the guards from a chest or cabinet. The level design also allows for different strategies, meaning you can start off with a stealthy approach in one area but then leave a trail of bodies in another.

A graphic point of improvement, audio a bit less

One of the major adjustments from Master of Shadows is the move to Unreal Engine 4. The previous game had moments where the frame-rate would drop significantly at times and would take a few seconds to recover, this proved problematic in combat scenarios. In Shards of Darkness, however, the graphical performance is much better. While the combat is still not as fluid as I would like, it’s definitely much better and one of the major improvements in the game.

The varied environments are beautiful, it’s clear that a lot of work went into the minor details. The textures are much sharper and make use of an extended colour palette. It’s not a graphics highlight like Horizon Zero Dawn, but the improvements they have made are absolutely positive and it must be said.

In terms of audio, it has remained about the same, but you occasionally notice some strange lip-sync issues when watching and listening to dialogues. On the other hand, the voice of Styx is still very good, but it can sound far away at times.

The soundtrack is very similar to the previous game and can often sound repetitive throughout the campaign. The combat music is pretty good, however, there have been many times where it began randomly playing in non-combat scenarios which can be pretty annoying and at times distracting.

Styx, the kleptomaniac green assassin returns in a good way. It’s rare that any gamer is smiling after repeated deaths and this is the nature of Styx, he is crude and vulgar and I like it. He has no regard for breaking the fourth wall or referencing other games. The game itself offers a lot of freedom, I love how I can approach missions in different ways. This combined with the complex but excellent detailed levels, gives you plenty of options and that can surprise you at times.

I was pretty disappointed with the audio, the soundtrack is pretty simplistic and the combat audio definitely needs a fix. All that aside, Styx: Shards of Darkness is worth the purchase. There is a lot of content for the completionist and I’ll probably replay the game 3 or 4 times to complete all the side-missions and collect all the hidden items.