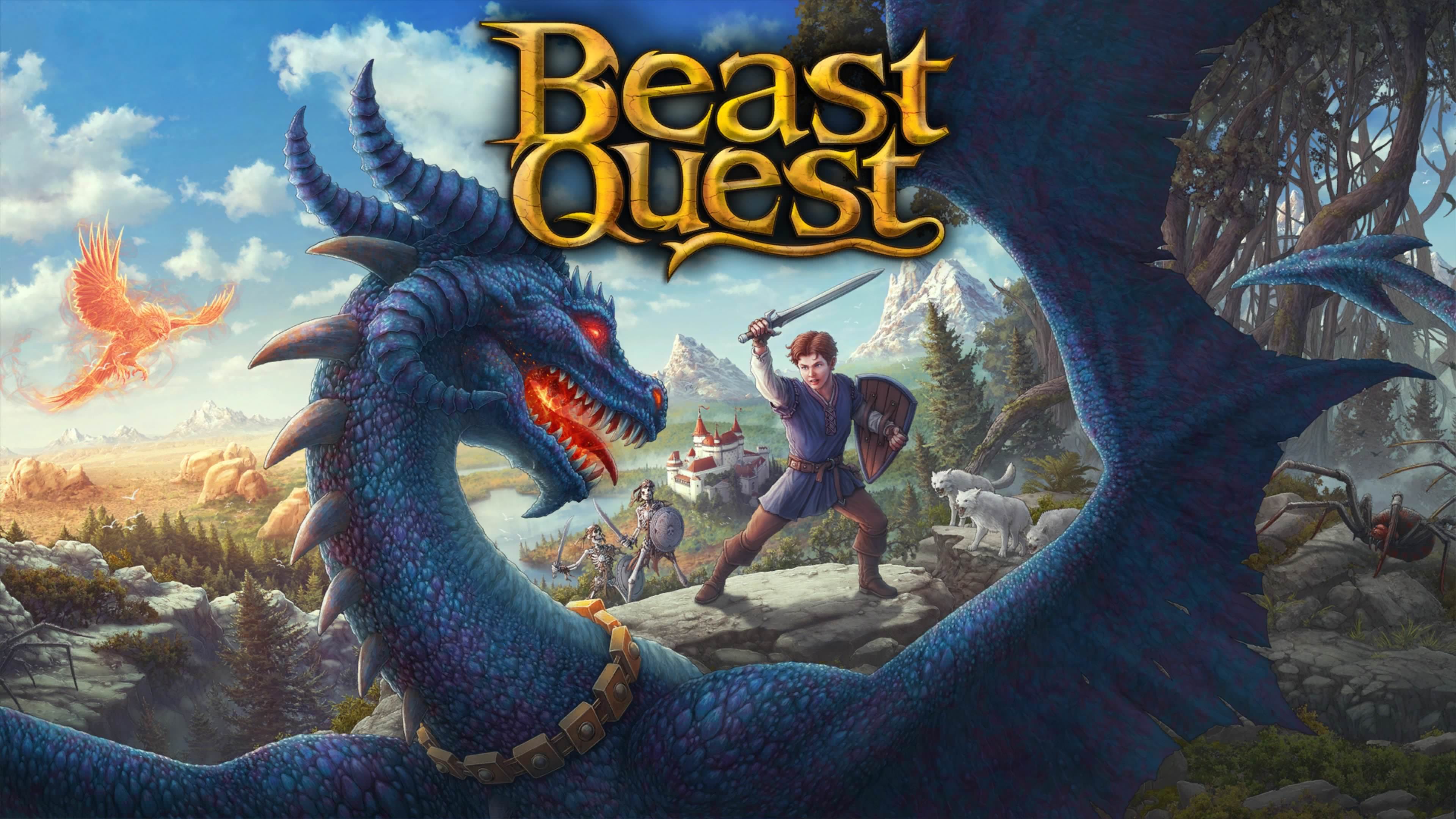 Knowing that Beast Quest is based on a series of children’s books would have saved me a lot of internal debate. This jaded games eejit wasn’t entirely sure what to make of Beast Quest‘s plain title, milky one-liners and other ‘jokes’. I thought it was a parody. After some ‘research’, the nature of the game became a bit clearer, though it scarcely excuses the other problems with Beast Quest.

The story is very simple which fed into my initial presumption of parody. Especially since its name belongs in the grand spoof tradition. Police Squad, Scary Movie, Star Wars. However, the quest is played very straight save for some comic relief. There is a soft fantasy realm called Avantia and a wise-cracking tween must save it with the help of the odd wise-cracking tween friend and some worn European Medieval fantasy tropes. Saving the realm is a matter of slaying beasts in a host of obvious elemental areas. The forest bit, the icy bit, the mountainous bit and the lava bit are beyond lazy.

There are plenty of side-paths and collectables to tease a player off the beaten track. The world itself is somewhat interesting to explore even if it isn’t particularly inspired or at all visually appealing.

Side-quests are outrageously limited in creativity. Every single one of them is lazy padding with nothing except a pitiful reward to tempt players away from the main campaign. Fetch quests, bounty hunting and flower-picking are all about as weak as it comes. These side-quests don’t even attempt to be the best versions of the boring sideshows they could be.

Even the dopamine-spilling act of opening chests of loot has to be artificially drawn out. Instead of just rewarding players for going out of their way to extend their play-time against their better judgement, the game forces us to have the correct colour key. The keys cannot be bought, only found throughout Generica – you usually need to backtrack to open the chest.

A Limit to Visual Slack

Gamers shouldn’t expect Battlefront graphics from the modest action-RPG that is Beast Quest. But the visuals are awful, even with their lack of ambition. Unity gets a bad name because of the horrendous abuse that skeevy Steam programmers subject it to but Beast Quest is notably ugly. It looks like a PS2 game rendering at 1080p.

While it may seem unfair to attack the visuals so willingly, I feel I was in no way expecting too much. To be this shocked at the presentation with the slack I was willing to give it should give you an idea of how poor the visuals are.

The NPCs models are low-poly attempts at a CGI-style but look more like The Sims. The first one. On the lowest-end machine capable of running it. Character animations are functional but repetitive. The landscape textures look like repeating patterns as far as the game can render.

The bosses and enemies are a bit better. While they aren’t very detailed or well-textured, the beasts are somewhat complex and formidable-looking. The unfortunate tendency towards palette-swapped enemies takes most of the good out of this. Worse still, the bosses are worn to death – they lose their visual punch when fighting each one three times.

Beast Quest seems to rely on the fact that the target audience has never played TLoZ: The Ocarina of Time. If they had, they might recognise a lot of the basic conventions of 3D ARPGs and wonder where the last two decades went.

One major difference from TLoZ:OoT is the ‘arena’ combat. Players passing within a certain radius of enemies will be locked into battle with no option to leave. Hammering light or heavy attack will deal with most of the earlier enemies with timed dodges, blocks and counter attacks becoming increasingly important later on.

The magic system is textbook – elemental powers that have a rock-paper-scissors effect on enemies of different type. The skill growth and gear system is a watered-down version of middle-ground fantasy ARPG classics. It’s not bad, just limited and limiting; forcing a player to progress in a certain way rather than offering real choice.

A nice mechanic is the inclusion of cover-points in battle where players can recover health and ‘bravery’. These points can be destroyed by larger foes so cowering there is only a temporary solution.

The auxiliary mechanics are totally unnecessary and add nothing but hardship to the game. The box-pushing puzzle only serves to waste time and boss battle QTEs are amongst the worst implementation I have come across in a while. The patterns are learnable but missing one will not only restart the four-five button series but send a player back to battle. A player then has to fight a little longer for another stab at gaming’s worst mini-game.

The book series is apparently authored by a host of secret writers under the Adam Blade name. The story, the characters, the fantasy are all the cheapest versions you can find. This ‘franchise by numbers’ attitude to children’s publishing carries over into the gameplay but with the added ‘personality’ of being buckled by technical issues.

The story, dialogue and humour come across as parody; so worn that I could not believe they were being played straight, even for children

Players can float up steep inclines by jumping at them. There were many occasions when I exploited this quirk to reach platforms that looked like a secret path only to be transported back to the corridor for a loss of health. There are some awkward invisible wall placements that are highlighted by the amount of seemingly fine but ‘out of bounds’ areas that a player can reach. Again, this comes with a health penalty.

Falling through the floor during battles happened about a half-dozen times – nothing I could do would fix this and the game was stuck in this state; no damage being dealt or received. There is no menu to quit with during battle so players need to shut the game off and reload.

There is a massive design flaw that undermines multi-foe fights – by weaving between enemies using the shoulder buttons, players can avoid any damage and land every single attack. This is game-breaking as fighting three of anything is infinitely easier than fighting just one. The breadcrumb trail makes a half-assed attempt at pathfinding, it often sent me the wrong way or disappeared through a hill.

Players will not enjoy certain aspects of the game’s controls or how they poorly fit the game world. The act of jumping is delayed significantly and running while jumping is even slower. Beast Quest has many jumps that players will fail to make due to this one control failing. Lining up to pull oneself up onto a ledge is cumbersome; a ubiquitous mechanic that gamers will have grown to take for granted over the last twenty years.

If the formulaic children’s media franchises of the day had forced me to play a game this bad; I probably would have been insulted

While Beast Quest is a game aimed at older kids and probably didn’t have a large budget, it is really bad. The poor visuals, unsuitable controls and bizarre technical issues ruin a perfectly forgettable game. The story, dialogue and humour come across as parody; so worn that I could not believe they were being played straight, even for children.

I have some experience as child having spent over a decade in the role during the late 80s and 90s. If the formulaic children’s media franchises of the day had forced me to play a game this bad; I probably would have been insulted.