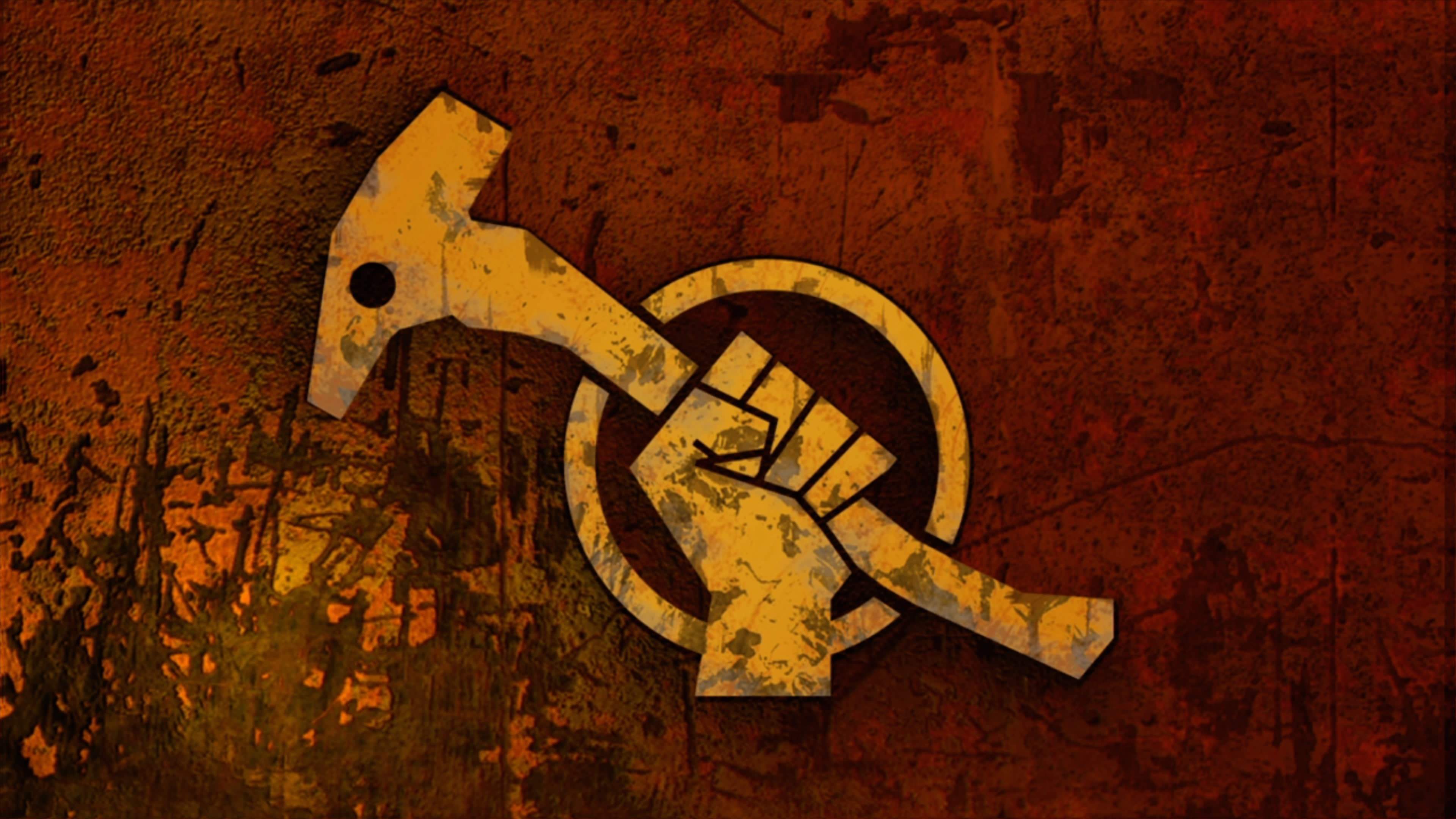 We used to take mindless, ceaseless action for granted. The romping, stomping open-worlder used to be a weekly fixture on the gaming calendar 5-15 years ago… But then devs and gamers alike decided that pacing and cinematography were things and the sub-genre died down a bit. Many of the scene’s heavier hitters have disappeared or have changed to fit the new open-world paradigm. While Red Faction Guerrilla: Re-MARS-tered is not going to resurrect a sleeping one-dimensional giant, it does remind gamers that dumb fun is worthwhile.

I am in no danger of ruining Red Faction: Guerrilla: Re-MARS-tered as explosions don’t have spoilers

Players take on the role of Alec Mason. Within minutes, players are fed some backstory to catch us up, gain a revenge motive and join the titular Red Faction as a titular guerrilla. This games nobody is not in danger of ruining Red Faction Guerrilla: Re-MARS-tered as explosions don’t have spoilers. Even the causes of the explosions are scarcely ‘ruinable’.

The EDF, our previous allies, have turned from saviours to enslaviours as the resource crisis on Earth causes a global economic meltdown. With a lot at stake for the Earth Defense Force, they have committed a lot of what little remains on Earth to capturing every morsel that Mars has to offer. When Mason steps onto Mars and sees the misery, he wants to stay out of it. Even with his brother imploring him to help, he is still unwilling to step in fully.

Red Faction Guerrilla: Re-MARS-tered is focused on extended bursts of gunfire and the brissant elation of wholesale destruction so its accessible story supports the action rather than getting in the way. That being said, players are never left questioning why they are doing any of this. RF:G:R presents a functional narrative that effectively explains the brutality and intensity of the combat.

anything man-made on Mars is asking, nay, begging to be reduced to pieces and recycled responsibly

Alec Mason has been handed a LiDL version of the Hammer of Thor and players will not tire of using it. Red Faction Guerrilla: Re-MARS-tered has a simple economic engine that is greased by debris. As a result, anything man-made on Mars is asking, nay, begging to be reduced to pieces and recycled responsibly.

Disengaging one’s brain and just going for it across the fallow Martian landscape is a pleasure that most gamers need reminding of once in a while.

There is a cathartic quality to erasing even the smallest of structures from the map. That doing so can kill the occupants and close bystanders, regardless of their side or level or innocence is a fact that will not escape anyone who plays Red Faction Guerrilla: Re-MARS-tered. ‘Friendly-fire’ in this respect certainly adds to the heft and the consequence of the destruction.

The game also encourages players to stick to destroying the opposing side’s everything. However, the mid-2000s game-save mechanic means that going rogue for 10 minutes after a timely save is perfectly normal, even good for you.

The destruction engine obviously hasn’t seen the ‘remaster’ love. While it does look dated, it stands as a testament to the design of the original game. Physics and their mechanics don’t usually age well. Ambitious games of all genres can become jarring, unplayable or just funny. Thankfully, RF:G:R‘s destruction still excites rather than amuses.

Red Faction Guerrilla: Re-MARS-tered is a tough game but in an admirably fair way. Players are intentionally vulnerable to any more than a handful of foes. Vehicles can be upturned easily in the lessened gravity of Mars. You will be killed by your own hubris as easily as anyone else. But players will eventually learn exactly how much they can chew and skirting that line between a barely-seen menace and public EDF nightmare is thrilling.

So fair is the heightened difficulty that skilled players or those who learn quickly can get locked into a groove. Becoming one with the hammer and remote explosive. Recognising a path to a load-bearing wall or buttress before the EDF know what hit them becomes a satisfying habit.

Red Faction Guerrilla: Re-MARS-tered has a mesmerising quality to it. Every so often a player will drift enough into consciousness to take a quest or do some tech errands and then get back to spacing at demolition. Without a careful balance and consistency of mechanics, this type of debris-hypnosis wouldn’t work. Nine years on and Red Faction Guerrilla: Re-MARS-tered still sucked me in for a few hours at a time; Volition deserve massive credit for that.

The last quarter of the main series of quests is much harder than the rest. A fact that is navigable by moderate caution or many hours of grinding for upgrades. Many players will not appreciate the latter. But for players who relish an ‘old-skool’ challenge, the former will thrill as the main-quest wears on.

Remaster of the House, Doling Out the Arms

One antiquity that is a little less welcome is the tech and arms progression system. A vast chunk of the options will probably never see use or even be unlocked. Players will need to invest some serious ancillary work (grinding) to taste everything on the menu.

The fact that our technology department is set of a map locations in their own right is a bad choice. Hopping to-and-fro to pick from a bewildering set of arms and upgrades interrupts the game cycle. If a player avoids popping back to base, they can expect to be outmatched quite quickly. This drive for better tech can deflect focus from the main mission; to destroy a lot of stuff around map-markers.

The ability to travel between bases is unlocked through the upgrade system but this only alleviates the break-up of rhythm brought on by visiting the crafting table.

Red Faction: Guerrilla: Re-MARS-tered has the lingering stench of rush, even after an update

Players have since become a lot more weary of the type of repetition that Red Faction Guerrilla: Re-MARS-tered demands. Saints’ Row is absolutely dead and the spin-offs are as good as so. The recent daddy of the genre, Just Cause, has dialled back on the sheer density of collectables and bases to attack with more focus on variety. There isn’t as much romping as there is roaming in Far Cry nowadays.

Despite a lot of RF:G:R‘s qualities standing the test of time, a player will get bored of the missions and lack of real variety around progression. With enough side-quests and weapons-grinding, a significant portion of you will struggle to finish the main quest.

After nearly a decade of online multiplayer progress, the set of modes and their execution would still be competitive were it more stable. From an era when every single-player game had a multiplayer element whether they needed it or not, RF:G:R has enough to differentiate it from last decade of cookie-cutter third-person shooters in PvP.

Some of the modes focus on the destructible buildings, making the MP maguffins more than just a glowing square on a map. The Reconstructor lends some balance to two protect/destroy modes as well as just spicing up the modes where it can be used.

Red Faction Guerrilla: Re-MARS-tered has the lingering stench of rush, even after an update. Kaiko Games didn’t do much to RF:G:R beyond a bump in resolution, cleaner textures and a very gentle ironing out  of the frame-rate. The game still has many a frame-burps (reviewed on PS4 Pro). It still crashes quite frequently. According to teh_interweb, this is an issue on both PS4 and Xbox One with less frequent crashes seen on PC with a little tinkering. (PC MARS-ter Race, amirite)

A combination of innate repetition and distracting technical issues undermine the foundation of an otherwise exciting game, bringing it crashing down.