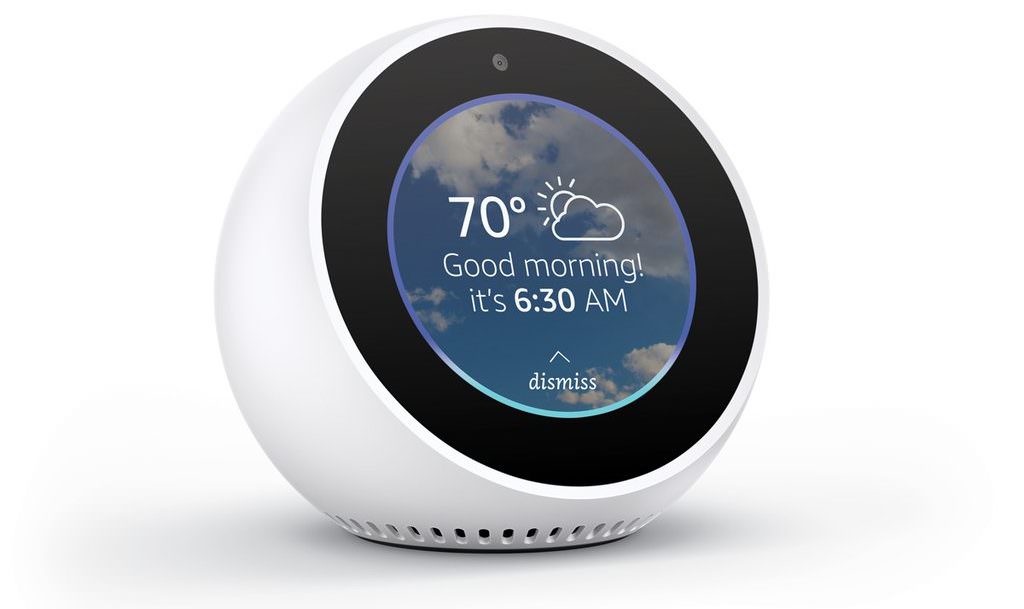 For Internet of Things enthusiasts, the previous iterations of Alexa Echo were exciting prospects. Streamlining your home appliances, entertainment and security systems into a powerful learning device was a winner. For the less tech-savvy, the excellent voice control and intuitive question/request system were an easy entry into AI and the world of apps and skills that those of us under the age of 50 take for granted. Amazon Echo Spot fills the gap left by previous screenless Alexae (plural) – Echo Spot is for everybody but the justifiably paranoid.

This writer has reviewed Alexa-enabled Amazon devices for his other job and found them to be excellent at what they claim to do. Control your connected devices, select a song from a compatible streaming service and all that casual stuff. But I have always maintained that they were undermined by the learning voice-controlled device that always lay close to hand. Smartphones took many of the functions that screenless Alexae boasted and kept them portable.

A screen may seem like a small addition but it keeps the phone in a user’s pocket. Simple skills like calendar, messengers and recipe/how-tos now have a vital visual complement. The blinking light just doesn’t convey info like a screen does. The alarm clock function alone makes the Amazon Echo Spot worth owning. The clock faces range from arty pointlessness to cute to highly functional. There are 17 available out of the box.

Alarm functions are folded in with calendar and messaging where possible. A user can see their day’s work as they wake up to Chesney Hawke’s ‘The One and Only’. Or feel that sickness creep in as they see a thousand emails awaiting them.

Functions that work perfectly well on a screenless Alexa device are enhanced by the simple visual aid. Music playback shows next track, time-elapsed etc., the kind of info we take for granted on every other media player of the 21st century. Squeezing information about dinosaurs or Dadaism can obviously be a little better if you ask for an accompanying image.

Should the Spot devices and/or another home video-calling service become popular, we may well see a resurgence in calling people at home. I can see telephone tables being recommissioned.

What Alexa offers explicitly to customers is delivered without compromise. Voice-recognition, Bluetooth device versatility and the ability to learn about individual users are impressive. The manner in which the basic functions and additional skills take advantage of these is even more so.

Amazon are also boasting about video-calling – it features in much of the promo material – and it is an excellent service with good image and sound clarity. Users can call non-Alexa users but how many people really video-call on the reg? I wasn’t lucky enough to have someone else similarly equipped with an Amazon Echo Spot so it was mainly talking to people’s nostrils while they were on a bus.

Should the Spot devices and/or another home video-calling service become popular, we may well see a resurgence in calling people at home. I can see telephone tables being recommissioned.

Music and entertainment lovers will probably need ancillary devices to take full advantage of the Echo Spot. The screen adds hugely the experience but I can’t see many users watching an entire episode of something on Netflix and, as discussed below, the sound isn’t suitable for music. But for voice, text or simple imagery and video, the AV capabilities are highly usable.

Following recipes, history podcasts with visual aids, how-to-guides on furniture repair are just three examples of Alexa wheelhouses that are enhanced by the simple 480×480 display. A circular screen is an odd choice. It limits the area in which text can reside and makes non-instructional or non-educational video uncomfortable to watch.

This writer found non-music videos to be more than adequate audio-wise. but Echo Spot just doesn’t have the pipes for music, as clear as her oration may be.

Amazon Echo devices have a highly variable level of audio fidelity. From the tinny Echo Dot to the deceptively rich and immersive Echo Smart, potential buyers are best being aware of the limitations of the standalone sound of Alexae. Even with the expectation of Bluetooth speakers being in on the act, it’s worth being clued in. 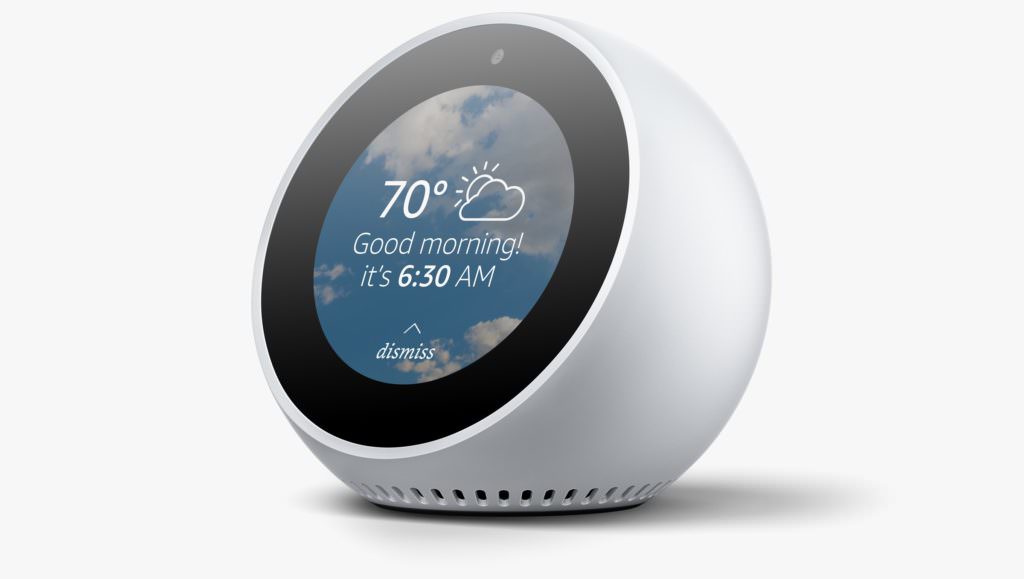 The Alexa Echo Spot falls somewhere between the best and worst that the systems have to offer. It’s loud and Alexa herself will fill moderately-sized rooms with ease. This writer found that non-music videos were adequately listenable. Echo Spot just doesn’t have the pipes for music, as clear as her oration may be.

There is an understandable but no less harsh emphasis where Alexa’s voice lies. The middle and upper-middle of the din can be a little hot during the highly-compressed popular music of the last 25 years. It’s just not pleasant at full volume or even a conservative reckoning of ‘loud’.

There is a lack of bass that isn’t just due to the frequency bias of the device itself. Amazon Echo Spot just doesn’t have the floor to reproduce decent lows.

At the moment, there are tens of thousands of skills available to United States users. The UK has around ten thousand. Ireland is a little light on skills next to the more mature markets. Understandably so, seeing as the system only entered the Irish market in January. The scope and variety is still enticing and intriguing but cluttered with useless rubbish.

I don’t need fart noises, I can make very convincing ones myself. I genuinely don’t want a robot wishing me anything for a human holiday. It’s similar to being thanked by the Tesco self-service; inauthentic as well as depressing. In fact, if Alexa was the only thing to wish me a happy birthday or Festivus I would be more upset than if absolutely nothing and no-one wished me so.

Possible Preface to Terminator; Definite Backdoor to the NSA

While the odd exaggeration around privacy and AI power does well to soften the actual negatives around owning AI devices like Alexa, it’s worth reminding people that Alexa is always on. Should you say anything it construes as asking for its attention that clip goes straight to Amazon who promise not to sell your data.

For what comfort that promise brings, Amazon won’t hesitate in trying to sell you something Amazon makes a profit from with distasteful regularity. There are a welcome set of EU-mandated options for privacy including what Amazon can gather about you – but you will always be spied on.

Of course, if you have any voice-enabled AI system about your person, you are being listened to if even nobody you know specifically will ever hear it. Just some algorithm hoping you mention a sales tag or the NSA.

Bear that in mind next time Alexa offers a joke or a heartless happy birthday.