Marvel’s Spider-Man is the next big exclusive game on PlayStation 4. In this instalment, Spider-Man is more skilled and powerful than ever before. I had the great opportunity to venture into Peter Parker‘s newest adventure early. In fact, I have already finished the game and I cannot get enough of it.

The most important part of a Spider-Man game is that the swinging works perfectly. Wherever you jump and wherever you go, your webs perfectly attach to nearby buildings, street lamps, trees and the like. Your webs can attach to every single structure in the game which ensures seamless swinging from one place to the other. Just swinging through New York City can be a lot of fun because of this. You can swing around corners without losing your web or sticking to buildings. Perfectly timed swings let you increase your speed, length, and altitude of the jump. You can even unlock certain skills that allow you to make stunts while swinging which also gives you some experience points. 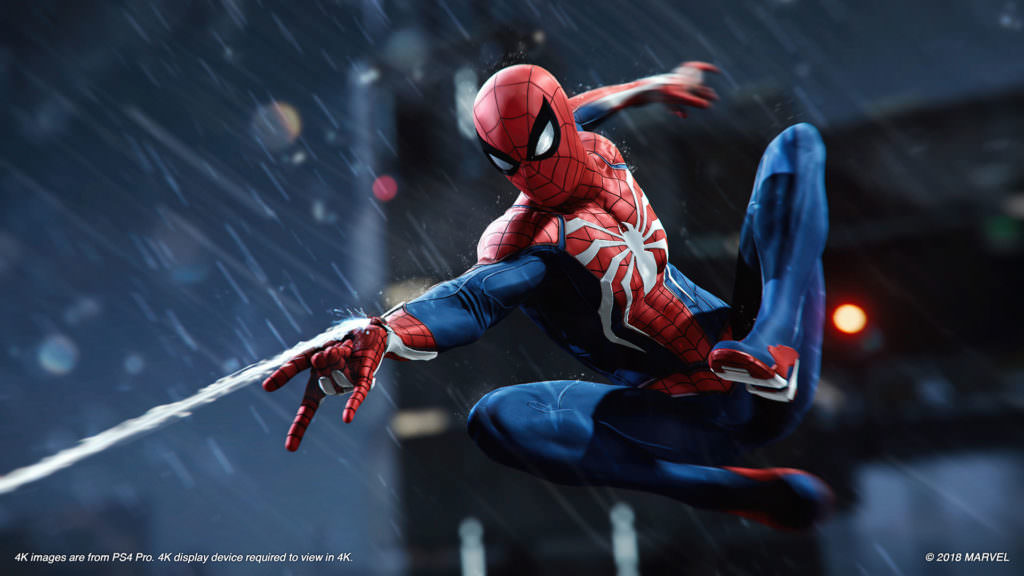 The customization options in Spider-Man seem to be endless. Let us begin with the suits. There are 22 suits in total that can be unlocked. In order to unlock suits, you have to earn base tokens, challenge tokens, landmark tokens or crime tokens. For most suits, a specific level is also required. You have to do all sorts of side quests to earn these token and although some of them were slightly repetitive I still think they were worth doing because of the huge amount of unique suits that you can unlock. There is not only the standard Spider-Man suits but all kinds of suits that differ in shade and shape. On top of that, each suit comes with a specific suit power that can also be changed.

There are 17 suit powers in total. When you are in combat, your focus increases. Once your focus is full you can activate your ultimate power with L3 and R3 giving you a very powerful attack for a short amount of time. One of these attacks, for example, electrifies Spider-Man’s hands which means that you automatically electrify and stun each enemy you hit without having to use the electric web gadget. But this is not all of it. You can additionally choose from 23 suit mods and activate 3 of them which also improve your character and help you in combat. Suit mods can reduce the damage taken, increase your healing or increase the damage you make.

A cool feature in the game are the gadgets. Gadgets are indispensable in combat and make fighting not only easier but also more engaging. There are in total 8 gadgets which either unlock when you progress in the main story or can be unlocked with tokens. The 8 gadgets are the following:

Gadgets are extremely important and helpful when you are in a fight with a huge amount of enemies. Electrifying or stunning one group of enemies while taking care of the rest can make your life much easier. Encountering dozens of enemies that shoot at you at the same time can be extremely difficult even on lower difficulties. Just like the suits, the gadgets can also be upgraded with tokens to improve duration, the radius or amount of shots of the gadget.

Let us finally come to skills. There are 3 skill trees to chose from being called Innovator, Defender and Webslinger. The Innovator skill tree comes with 12 new skills whereas the other two come with 11 skills each. Each of these skill trees sort of has 3 unique attacks that build on each other and can be upgraded.

Throughout New York, you can do all sorts of quests and challenges. Many of them will be unlocked as you progress in the story. Side quests that I really enjoyed are the research stations. These are abandoned laboratories that shall prevent the citizens from harm. The research stations are always located on rooftops. In these quests, Spider-Man has to swing through air pollution to get samples or distribute vaccines among pigeons and fish to prevent an epidemic.

There are a couple of fetching quests which can be quite tedious. All over the map, you can find Peter Parker‘s backpacks which all include an item that tells a bit more about him and his life as Spider-Man. It would not be New York without tourists. Insomniac Games tried to incorporate a photo mode and turned it into a gameplay element. Famous places like Times Square or Brooklyn Bridge must be photographed in order to get landmark tokens. I usually did these tasks when I was on my way to the next side or main quest for example. Just collecting dozens of backpacks would have been a bit too tiring in my opinion.

Then there are the taskmaster challenges. A mysterious taskmaster gives Spider-Man special tasks which he has to fulfil in a specific time frame. There are stealth, drone and bomb challenges. In the stealth challenge, you have to stealth kill all enemies without being seen. As soon as you are being seen, you have to start all over again. In a drone challenge, you have to follow a drone all throughout the city. This drone leaves blue balls behind that Spider-Man has to swing through to get more bonus points.

Finally, in the bomb challenge, you have to locate three or more bombs which you have to destroy before they detonate. If you successfully finish these challenges, you are awarded a bronze, silver or gold medal. In order to get the gold medal, you have to be as smooth, fast and flawless as you can. I have to admit that I did not get a gold medal in each challenge yet because some of them are incredibly hard to master!

Lastly, there is a huge amount of outposts, hideouts, and camps of enemies that you will encounter in the game. You unlock more of these fighting grounds as you progress in the main story and meet new enemies and their companions. These fighting grounds are always flooded with enemies which all have to be taken out. The enemies spawn in waves. Each wave spawns more enemies that are harder to beat. This is when gadgets are becoming handy. This is a spoiler free review and I do not want to take the joy of experiencing this adventure on your own away from you. Instead of going into too much detail with the story, I want to tell you how the story affected me. Peter Parker is leading a double life. Peter is a normal guy that just finished his thesis, found a job as a research assistant. He truly enjoys and believes in his vision but his salary is not the best which he accepts because he truly believes in the work and vision of his employer. He struggles to pay his rent and eventually loses his flat.

Peter Parker’s and Spider-Man’s lives could not be more different. Spider-Man is a superhero the citizens love and believe in. Among the youth, he is a symbol of justice and power that defends the weak and fights the strong. Whereas we experience great adventures with Spider-Man, we also get to see a vulnerable Peter Parker who is easy to relate with. After 6 months of not having seen each other, he meets with his ex-girlfriend Mary Jane Watson called MJ. 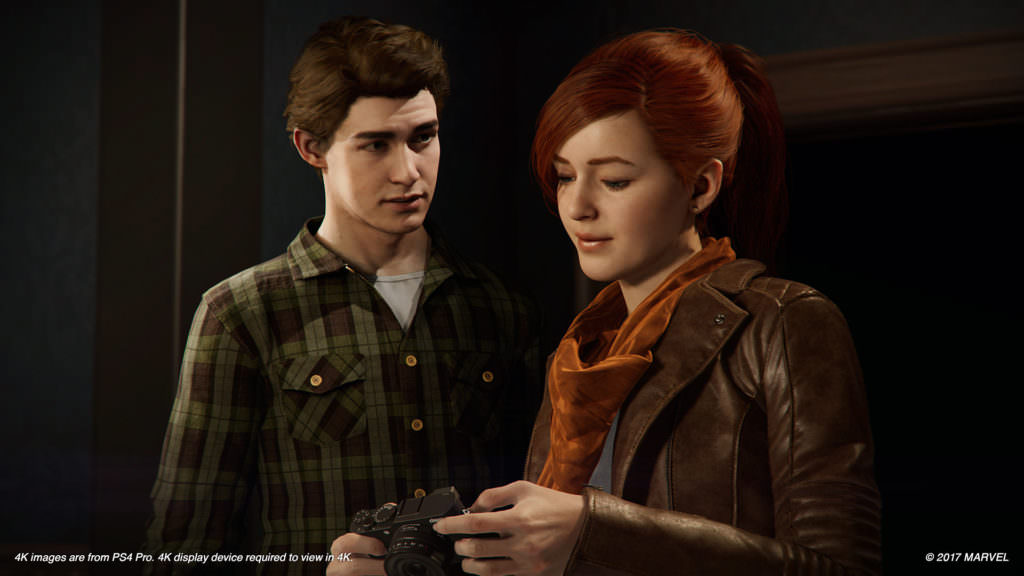 She works as a reporter who is always present at crime scenes and therefore is also willing to help Spider-Man in his tasks. MJ is not the only one supporting Spider-Man. There is also a police officer called Yuri Watanabe who constantly keeps him aware of crimes within the city. Spider-Man being the neighbourhood hero works with the police and comes to their aid whenever necessary.

It would not be a Spider-Man game without villains. Instead of following a single objective throughout the story, the villains and crimes build on one another. One villain leads to the other which results in a seemingly endless chain of crimes in New York City. The story is being accompanied by amazing visuals and cinematics making the story even more expressive. In Marvel’s Spider-Man you cannot make decisions that influence the story which is not bad in my opinion.

Not every single games need to be that way. The story in Spider-Man is predetermined and perfectly thought through. There were no logical errors or aspects that made me question the story as a whole. Even more so, the story is very unpredictable and will make players gasps in disbelief. There are major plot twists I did not expect but fit perfectly and made the game perfect as a whole.

As you can tell, I am highly impressed with Marvel’s Spider-Man. Insomniac Games did a great job bringing Spider-Man to live in a world that does not feel empty but alive and challenging. I really like that I got to know more about Peter Parker than just Spider-Man.

The only issue I had with the game is that there were quite frequent loading screens. Each time you start a side quest, challenge or tasks the map needs to reload so that you can do the quest. I have to admit that I was not used to the number of loading screens anymore. It did not make the game unenjoyable by any means but they were still noticeable. This, however, is only a minor concern that I noticed.

Besides that, I did not have any issues with the game. I was able to play it effortlessly when I just wanted to swing around and collect items such as the backpacks. When I wanted a tougher challenge I just went to the numerous amount of hideouts and fought criminals. Whatever I felt like doing, there was always something or someone that needed my help.

With plenty of skills, combat moves and gadgets Insomniac Games created a masterpiece that is at the same level as other PlayStation games like God of War or Detroit: Become Human.