Castlevania’s reputation has been long established. Those too young to remember the series during its amazing heyday still recognise the characters, the music and the whip. Castlevania Requiem takes two of the series’ best but doesn’t do all that much to repackage them for the uninitiated.

There are some filters to smooth out the image or give Castlevania Requiem a classic CRT television feel. Some interesting backgrounds to fill out the swathes of blank space around the games. That’s it as far as what a player will notice. The devs may or may not have optimised the game for laggy modern televisions.*

Richter Belmont is a vampire-killing tradesman like his forefathers and when his love gets kidnapped, he is well-equipped to get her back

The first game of the two chronologically, Rondo of Blood was initially released in 1993 for PC-Engine in Japan only. This obviously left a lot of people out so the game was ported to PSP in 2007/8. That didn’t really improve its reach either and Castlevania Requiem is probably the first chance that a wide audience has had a chance to play the game.

Rondo is a traditional side-scrolling adventure like earlier ‘vanias but tries to be more. And it succeeds by every measure. Rondo of Blood follows an outwardly simple plot. Richter Belmont is a vampire-killing tradesman like his forefathers and when his love gets kidnapped, he is well-equipped to get her back. Players will die a lot in the quest, Rondo is a hard game that will be a struggle for those not used to such difficulty. But after one whole run, players will get the impression they have missed a few things – it’s a highly replayable game. The alternate paths and secrets aren’t obvious to unlock and the enigmatic levels will all hook those who survive till the end just once.

Rondo’s story is a little less simple than players are led to believe. Additional characters can be unlocked and the huge (for 1993) CD-ROM storage is used for some delightful hidden expositions that really reward an intrigued player. The gameplay and level design are what bring you in but most players wanting to know more will play Rondo again and again.

The funny thing is – Rondo of Blood is the less-acclaimed title of Castlevania Requiem but it impressed me more. Despite its depth, one could battle through Rondo for the challange, gameplay and spectacle and still enjoy the game immensely.

Many of you are familiar with Symphony of the Night. If not from its many popular releases, surely from the endless placements on ‘Top 10’ list across the retro corner of the interweb or from its part in coining the sub-genre portmanteau, Castleroid. 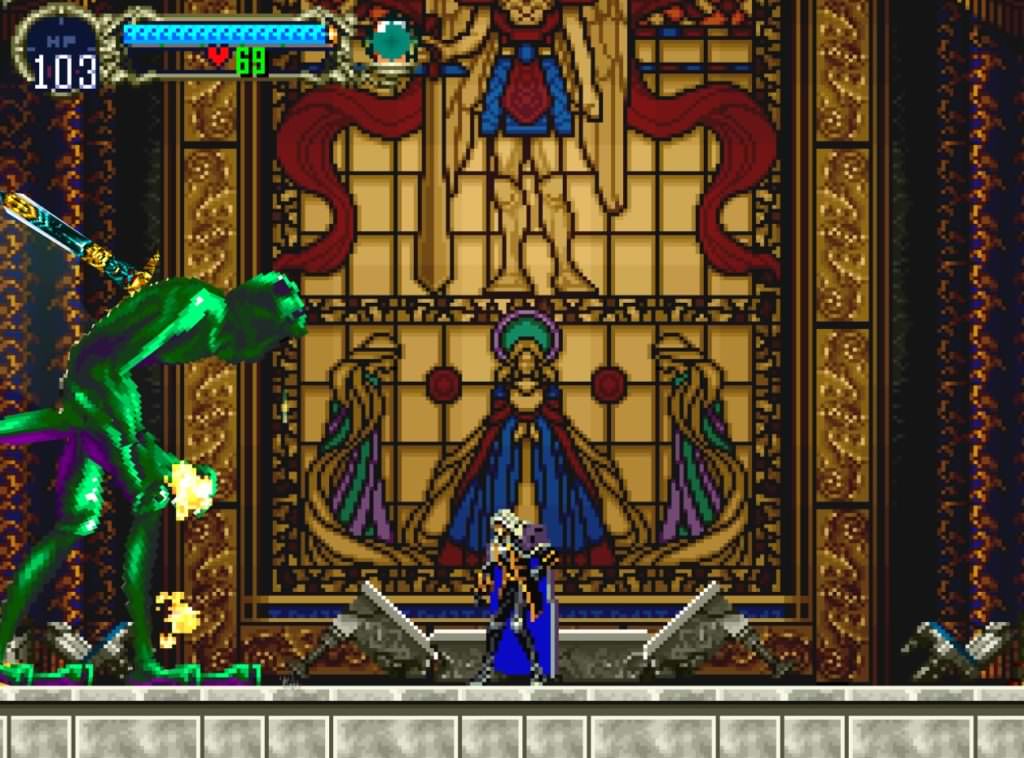 Players will explore, battle formidable-looking but moderately-difficult bosses, then backtrack when Alucard gains a power that grants him access to a new area. All while levelling up for the final showdown. The RPG elements are quite streamlined for a game of Symphony of the Night‘s vintage. Aside from having to throw food on the floor to consume it, players won’t mind interrupting the action to try new weapons or attire combos etc..

With Ali going against the wishes of Death by trying to prevent death by bringing preemptive death, players must regain their supernatural powers before attempting to stop Dracula

The controls here are a little more refined than Rondo, a little more forgiving and with good reason, SotN is a huge game with an astounding cast of foes to battle and aesthetically interesting locations to visit.

In 1997, SotN must have been a breath of fresh air to those tanking it up with Lara Croft and Chris Redfield. Symphony of the Night surely reminded gamers that 2D controls were tighter than anything 3D could then offer.

The game follows Richter briefly in the tower of Castlevania as players take part in the best prologue this games writer has ever played. Richter exchanges fancy fighting talk with Dracula and the game basically fills you in on the ending of Rondo while sneakily creating your character’s stats by how you do in vanquishing Drac for ten decades or so.

When we start as Alucard, the vampire vacation is over. With Ali going against the wishes of Death by trying to prevent death by bringing preemptive death, players must regain their supernatural powers before attempting to stop Dracula and the ambitious vampire hunter seemingly looking to get more business out of a vampire-human war. No major spoilers. But it’s a tale of the Hunter-Vampire complex; a phrase probably coined by Dwight Eisenhower.

This writer isn’t a Castlevania buff nor does he have lingering golden memories of playing the series as a child. It was relatively easy to imagine how someone with even less experience of the series would fare with Castlevania Requiem. 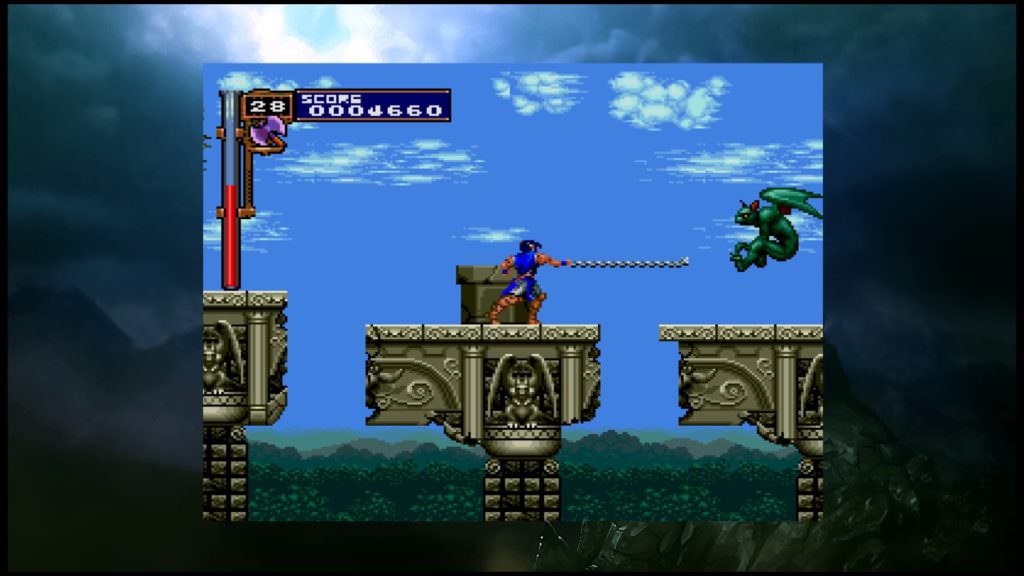 The controls of both titles stand the test of time as does the most of the level design. While Rondo is a stiffer and more deliberate game that takes more getting used to, it’s not unfair nor does it demand dozens of deaths. Enemy placement is awkward to foster challenge rather than to chip away at player’s health and artificially extend the game. Unavoidable damage is rare. Rondo of Blood also subtly tells a player to be patient by rewarding observation and punishing thoughtlessness.

There is one issue in the second title’s design – the second half of the ‘real ending’ SotN playthrough seems tacked on without enough care. The inverted castle is a nightmare to navigate with players spending a lot of time as a bat. The time they spend on foot lacks the difficulty management and nuance of the regular map. Overall, it isn’t nearly as satisfying or intriguing as the first run, even with some new bosses. Players will annihilate 95%+ of what they fight during the inverted run with a swipe or two. Only to meet the odd unstoppable boss.

Instead of offering insurance when you fall into a boss fight while looking for a savepoint, Quick Save whips you back to the main menu

For around a tenner each, players get to play two amazing games that are as playable and inviting as they were back in their respective days. This writer is sure that Konami optimised the titles for modern displays – the fine timing needed in the games (especially Rondo) seems preserved. I had little difficulty ‘gittin gud’ at Rondo, a notoriously difficult but fair title; any digital image processing lag would surely have prevented this. The range of image enhancement options in Castlevania Requiem, while welcome, is limited. Interlacing is hard to look at and the scanlines are pointless. Pixel smoothing is for much younger eyes who won’t appreciate the blocky look of the low-res assets. I can’t imagine anyone over the age of 25 smearing the sometimes-divine art on show.

Stretching the image does worse. Pulling it out to match the gigantic TVs of today betrays the low resolution of the games even more. Playing it as close to the original resolution as possible is the way to go.

The addition of ‘Quick Save’ is botched in Symphony of the Night. Instead of offering insurance when you fall into a boss fight while hunting for a savepoint, it whips you back to the main menu. Players then load in from the last savepoint with a confusing loss of items and progress – it’s absolutely pointless. 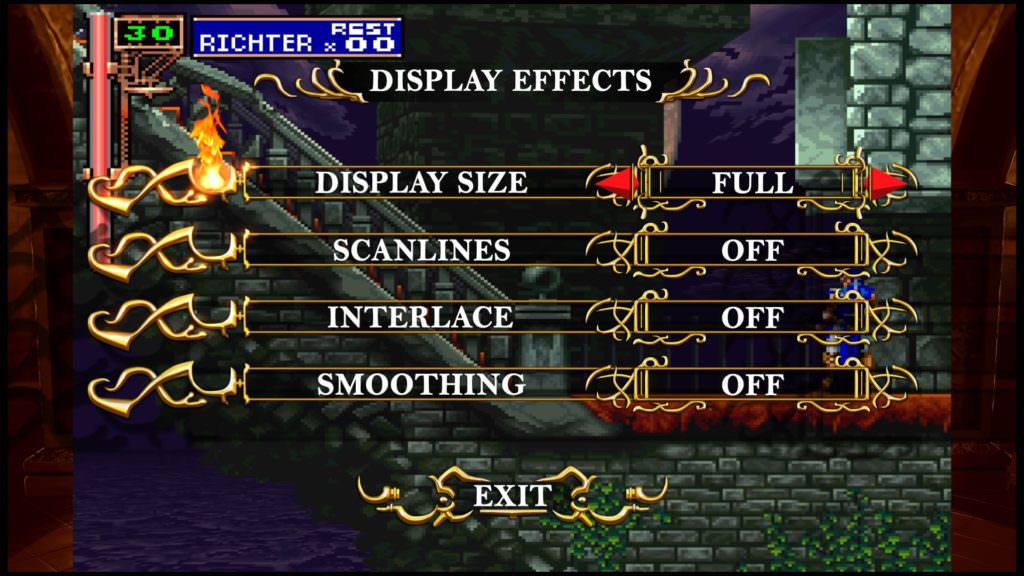 Players will have their own, probably negative, opinions on the choice to use anything but the original Japanese voice tracks for the two games. The English translations used in later versions of the games are also considered inferior to the original English subtitles. I find it curious that the German voiced intro with English subs remains in Rondo. 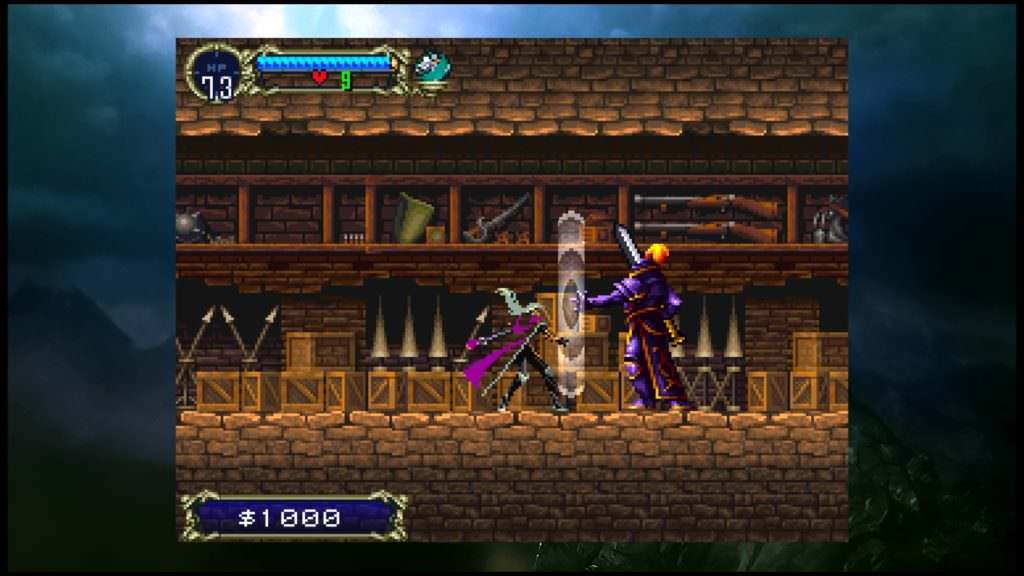 I agree with the summary.