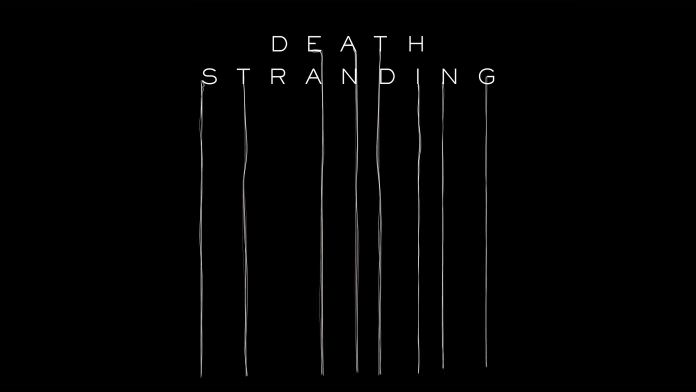 Hideo Kojima appeared at Gamescom today unveiling the first uncut gameplay trailer for Death Stranding which features Geoff Keighley, new mechanics, and player-controlled pissing. (Mushrooms also form where you whizz and players are also encouraged to relieve themselves in the same places for a “surprise”). IT’S KOJIMA. IT’S WEIRD. AND WE LOVE IT. Take a look at the gameplay here:

The gameplay footage begins showing Norman Reedus’ character, Sam, waking up from a nap in the middle of a stunning valley vista holding his baby travel companion, BB. Following this, Sam stands and we’re introduced to the game’s urination mechanic – which includes a pee-gauge showing players Reedus’ character’s remaining urine. Right down to the last millilitre.

Just in case you were curious, it doesn’t seem like Death Stranding will feature Norman Reedus’ junk, as Sam will turn when the camera gets too close to exposing his, as Hideo Kojima himself puts it; “his gentleman’s arrangements”. While played for laughs, it seems like this mechanic will have some sort of impact in-game as a mushroom quickly sprouts from Sam’s call of nature.

In the distance, we hear a call to Sam and we see him scan the area with the same tool attached to his back that we have seen highlighting threats in previous trailers. We also get a bit more of the game’s ladder mechanic which allows Sam to reach the isolated outpost and source of the voice. Stopping for a moment, the camera then focuses on an image of Kojima Production’s logo on the side of the building and again just inside on the wall, hinting to the inhabitant’s identity.

Immediately after this, Sam encounters a face familiar to most in the Gamescom crowd – none other than Hideo Kojima champion and Gamescom Opening Night Live host; Geoff Keighley. While unmistakeably Keighley, the character in-game is voiced by Matthew Mercer. Named Ludens Fan, Keighley’s doppelganger’s name is actually a play on words – Ludens being the mascot for Kojima Productions that was on the wall outside. A nice nod to the pair’s relationship.

Keighley’s character then goes on to mention the “chiral network” and the “UCA”, or the “United Cities of America”. After which we see Sam using some fancy-looking USB sticks to “establish a new strand”, connecting this location to the remainder of civilization that once was the United States.

With the cargo delivered, Sam steps back out into the wilderness and immediately walks off a cliff, waking the sleeping infant in the tank on his chest. Here we are shown the game’s “Soothing BB” mechanic where the onscreen prompts indicate to the player to rock their Dualshock in order to calm the baby. We then hear the baby coo as Sam slides down the valley as the screen cuts to the title: “Death Stranding”.

During Koejima’s Gamescom Death Stranding presentation we were also introduced to some new characters Mama (Margaret Qualley – The Nice Guys, Once Upon a Time in Hollywood) and Bridge Baby; her daughter who was born on the other side. Despite this, the two are still tethered to each other via the umbilical cord.

As well as that unlikely pair, we also got our first look at Deadman as he showed Sam the ropes when it comes to taking care of his BB. “There is still a great deal we don’t know about BBs.” You and me both Guillermo del Toro, you and me both.

Death Stranding is out November 8th and will be Kojima’s first game since his unceremonious departure from Konami and the Metal Gear Solid franchise. Stick around for more coverage from Gamescom here and check out the whole presentation at Gamescom 2019 here: