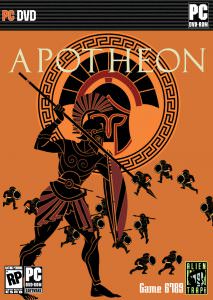 Challenge the Ancient Greek gods of myth in this side-scrolling 2-D platformer. Wield their own might against them as a mere mortal. Bring low those beings who thought themselves above humanity and cast it aside.

In Apotheon, you play as Nikandros, a Classical hero invented for the game’s purposes, to represent mankind against the wrath of Zeus and his followers, in their very place of power, Mount Olympus. Immediately, the game immerses the player in a living black-figure painting, as if a Greek vase of old has come to life. The beautiful surroundings are completely enrapturing. A great attention to detail was paid by the artistic leads at Alientrap games. Famous sculptures and paintings of Ancient Greece are hidden throughout the open world, for those who have the eye for them. The faithfulness to the myths is incredible, to the temperament of the gods and their lessers, to the ugliness of the foul immortal creatures.

Apotheon contains the continual gratification of upgrading and gathering loot, building your warrior to the mightiest he can be, in the arms of the heroes of epic poetry. As the difficulty increases, holding onto the gold one finds can become a chore. Potions and equipment are in constant need of replenishment, as enemies can be found in any location, depending on the player’s treatment of the locals.

The music, coupled with the beautiful scenery completely envelopes the player in the Greek world of legend. The voicing of the characters leaves something to be desired, however. The English inflection and slang works to an extent (not to suggest the developers should have used Ancient Greek), but it seems out of place in many instances. There isn’t much character development, especially since the protagonist is seemingly mute, and the plot is straightforward and not incredibly engaging. The game doesn’t try to reach for this though, as the gameplay and immersion appear to do the heavy lifting.

Combat is fun, as the ever-expanding arsenal and variety of enemies with different weaknesses keeps the player on their toes, and keeps the gameplay fresh. Puzzles are frequent, and backtracking for extra loot, a staple feature is these kinds of games, is seen much of. The feeling of an open world is amplified by the side-quests that aid the player in their battles. They’re often needed, as fights can quickly escalate in difficulty in the journey toward Olympus’ peak.