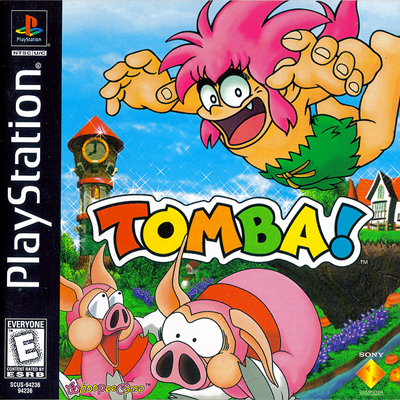 10 excruciating hours of my life were irreversibly spent on Tomba! due to my compulsion to be a completionist with stupid bullshit. It sent me into a state of video game fatigue that has insured I’ve barely touched games in the weeks since playing. So what the hell prompted me to play it in first place?

After slogging through Tomb Raider: The Last Revelation, which upon a replay was the most dragged out one in the original canon, I wanted a platformer that was more snappy, colourful and bright enough to show me where the hell I was going. A sort of surrogate nostalgia gave me implanted fond memories of Tomba, and when I saw it on the Playstation Store I regressed into a base, childlike mentality and thought “WOO YEAH TOMBI IS AWESOME!”. 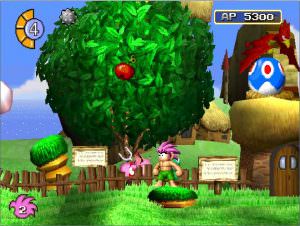 Because damn near everyone had the demo when they got their first Playstation. It came with PlayStation Magazine in 1998 and gave us a lengthy chunk of gameplay under the name “Tombi“, because localisation works in mysterious ways sometimes. Remember the weird ass-plants that farted when you grabbed onto them? Well, so do most people who owned the full game because fuck all bothered to play far beyond areas in the demo. And I don’t blame them. I blame myself for not doing the same.

I rarely use my own screenshots for these articles due to not having a capture card, just using whatever looks fine from Google Images or random Let’s Plays. Considering there’s bugger all of anything past the first two areas, it’s not just me.

Beyond the walls of the demo, Tomba degenerates into a pubic tangle of woeful point n’ click adventure logic side-quests. The kind of inane, illogical bollox that has you performing some arthouse procession across a convoluted map to collect randomly scattered beads to give to some random character for reasons you’ll never understand. 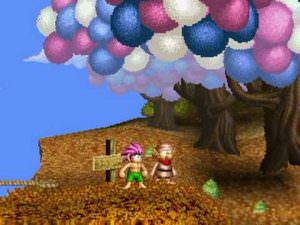 While it looks like a simple 2D Nes platformer at first, Tomba quickly starts trying to move you around in a 3D overworld, having the level noxiously turn if you press up or down at certain doors and crossroads. They give you a map in the pause menu (or rather, one of the pause menus; the one you have to press select rather than start or triangle to open), but it doesn’t line up with the world  and the text telling you which area is which is in the wrong places.

You run around, jumping on and throwing pigs and other animals, before talking to every NPC you see in order to unlock quests. To highlight what the process of playing this Mad Hatter designed game is like; Talking to Identical Dwarf NPC#13 by the broken water fountain at Charity Square unlocks the quest “Red + Blue = ?”, which has the description “Put the two together for something you’ve never seen before.”

…”the two” what? The Dwarf vaguely mentions turning a red flower blue, and if you’re lucky you’ll have tripped over blue powder by then, but which flowers, where, how do you mix it with the red one?

Turns out, and I don’t know how the hell anyone figure 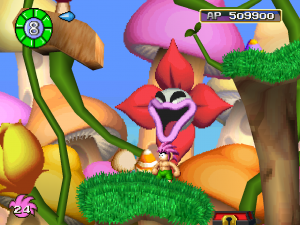 d this out without a guide, there’s a very specific flower enemy in a single area that it works on. To mix it with a red flower, you have to go into your menu and use the blue powder, hop on it and toss it another red flower enemy (which is fiddly as all merciful fuck). Then, a brown mushroom sprouts on the spot. In order to finish the quest, you have to jump on and eat the brown mushroom which turns you silver, wait a few seconds, then the quest will say it’s completed. There’s not a hint towards any of this in the game.

There are 130 quests like this, most of which are even more obtuse.

A lot of the confusion comes from bad translation of a very Japanese game. The “story” has Tomba chasing down the evil pigs who stole his golden bracelet. You find out later that the pigs are hoarding gold for their evil pig-wizard overlords to give them the strength to cast curses on the land….I think. The pig-wizards are bosses that, in order to find and defeat, require you to collect magic bags to put them in. Once you have the bag, you find doors hidden in certain areas, walk through them, then beat them in basic, boring boss battles that end in a single hit. 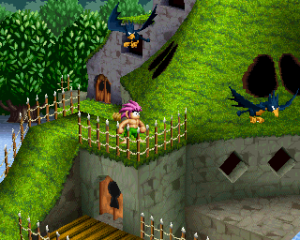 The logic to any of this is anyone’s guess. Expository dialogue must have been made up on the spot because it just simply doesn’t make sense. That on top of the simple Japanesiness of it all, referencing old folk tales or plays on words that can’t translate, is bad enough. But then you have adventure game logic which only makes sense to the person designing it. THEN you have a quest system that has 30+ quests active at any given moment, some of which can’t be completed until the others are, with nothing to tell you any of this.

I just want to forget this game.

I can’t though. It was genuinely torturous; looping 10 second songs that drilled chirpy notes into my cochlea like I was in Guantamo Bay without explanation. It sits on my brain like a mass of saturated fat, taking up space I could have spent learning something. As a reviewer, I wish I had more to say on it. I wish I could get into the mechanics or the design choices and more objectively point out why it fails as a game, but every time I try to open it up and take it apart, all of the gears fall out of the bottom like an animal evacuating itself in a fight or flight situation.

The music is an out-of-tune feverish soundscape on a short loop. The translation is terrible and makes quests impossible to figure out. Boss fights are anti-climactic and end in sec 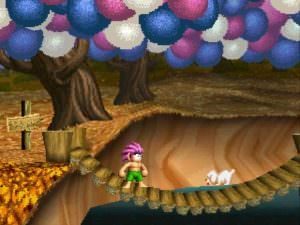 After I had defeated the 7 main bosses, turning them into statues that once each one was placed into pedestals to unlock the door to the final boss, said final boss appears out of his own arse, has them all come back to life and fuck off into the sequel.

Then, an NPC just says “aw shucks, but I guess we can just get some of our friends to stand on the pedestals instead”. Which translates to “go across the entire fucking map, talking to every single god damn NPC again until 6 of them agree to stand here, and eat a dick while you’re at it”. But, again, the game never has the common courtesy to tell you you only need to talk to 6 of them, leading you to look for the seventh to no avail for hours on end. Turns out you return to the spot once you find the 6, and the 7th is revealed to be the dog you carry in your inventory.

Even with a half-complete Wiki to help, this game broke me. In one fell move, after hours of surreal, Black Hole Sun tier horror, the game says both “lol, none of it mattered” and “lol, do it over again”.