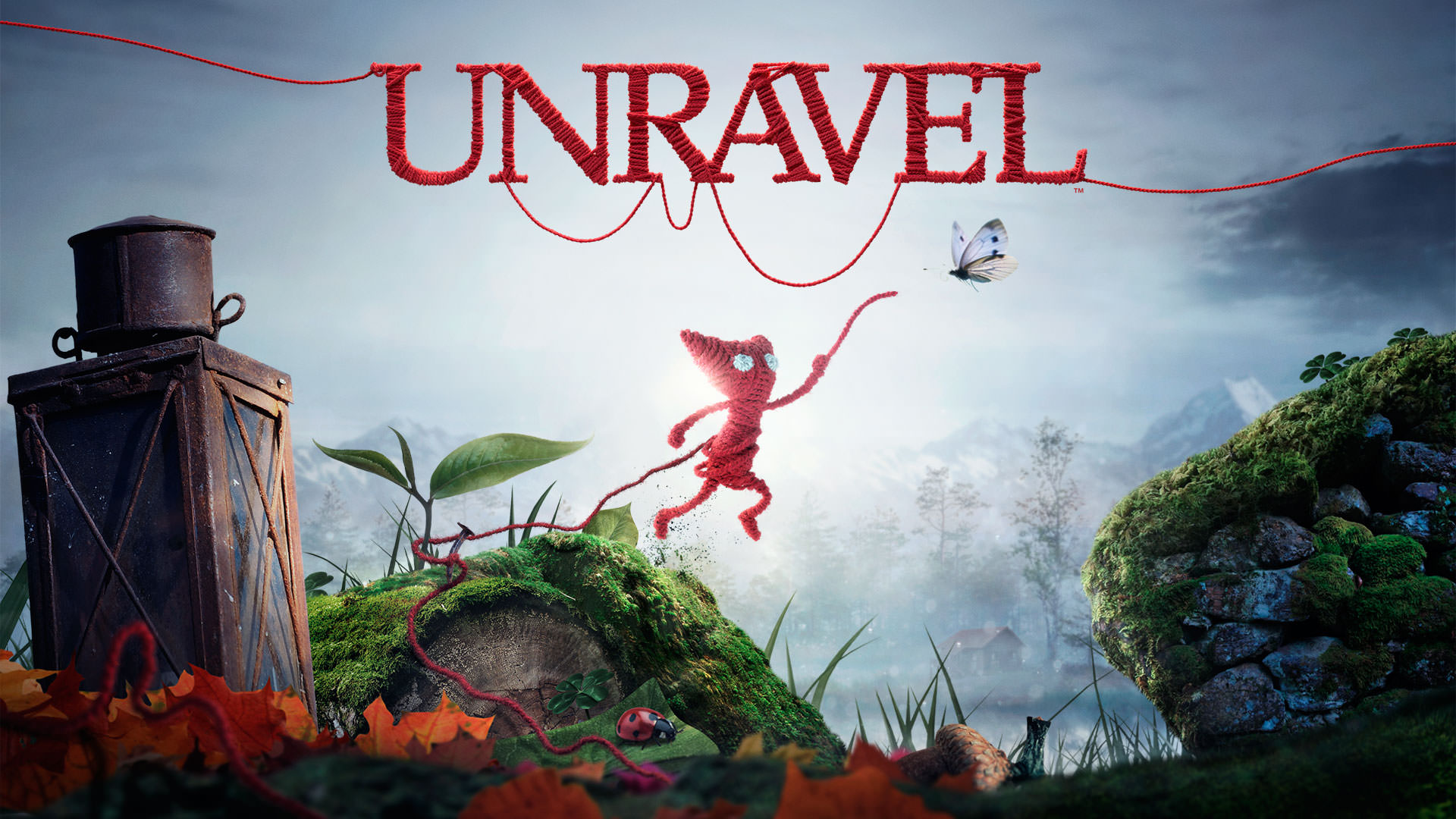 Unravel is a puzzle platformer developed by Coldwood Interactive and published by Electronic Arts. It is centred on an anthropomorphic ball of yarn called Yarny, who is venturing out into the world for the first time.

Unravel looks simply amazing. The lighting and environment are beautifully designed. As the main character of the game, Yarny features intricately detailed texture on all of the promotional materials for the game. I was happy to see that the developers followed through with this idea throughout the game as much as they could. Most of what makes Unravel beautiful is the attention to detail in the textures that feature extensively in the game. Water is almost an adversary in the game – if yarny spends too long in it, he gets sucked under to his doom. Even if he walks through it his steps are heavy as he absorbs the liquid.

The game is a platformer, which doesn’t allow for a lot of depth to the playable game area, but, the backgrounds have been constructed to convey, not only distance beyond the plane the game is on but an implication that there is an entire world just beyond our reach. 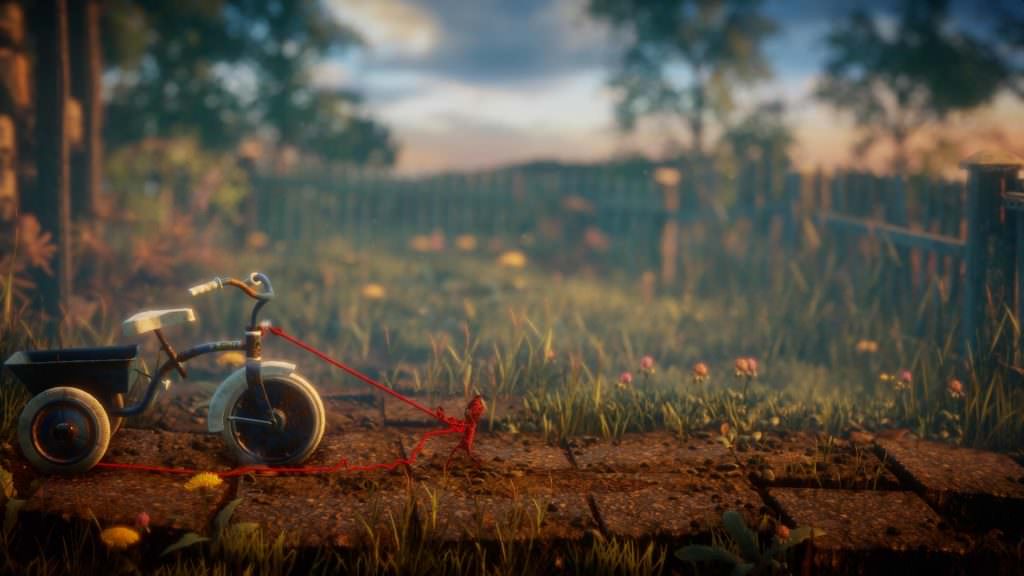 There isn’t much of a UI to speak of in Unravel. There is no HUD and the main menu doesn’t have many options. In my opinion, this is even more of a reason to pay attention to its design. Maybe this is because I am a designer but I really did feel that the menu design for Unravel was lazy. The typography didn’t really work, it was just a plain white serif typeface. Yes, I know that the game logo is based on a serif typeface too, but players see the menu every time they pause the game and I did not find the menu that pleasing to look at. In fact, I was a little disturbed by the odd choice of the use of a photo of a finger to point out things on the controller in the menu. As I said before, the game tries to use realistic textures in its design so I can understand the logic here but I really feel like this was just misplaced. If the main character was a human it would have been acceptable, but I just felt like it was out of place and a little jarring, especially when simple red lines and circles are used for the rest of the animation in the sequence.

I know that I can be picky when it comes to the music section of my reviews, but I really hated the music in Unravel. At first, it was ok, after a while it kind of seemed like it was a little repetitive. I let this slide, though, as I can admit that the style of music is not to my taste. Even with that in mind, it really started to drive me nuts. I understand that the music is attempting to be outdoorsy and whimsical but after a while, it just sounded to me as though one of the scenes from The Shire in the Lord of The Rings had been left on repeat. I eventually turned off the music, and my playthrough was all the better for it. I am also certain I can’t be the only one who felt like they were being driven over the edge by the sound of the buzzing insects that were perpetually stuck to Yarny during certain parts of the Berry Mire level. The music and sound effects that annoyed me certainly weren’t enough to prevent me from playing the game entirely, but they were very noticeable and bothersome. 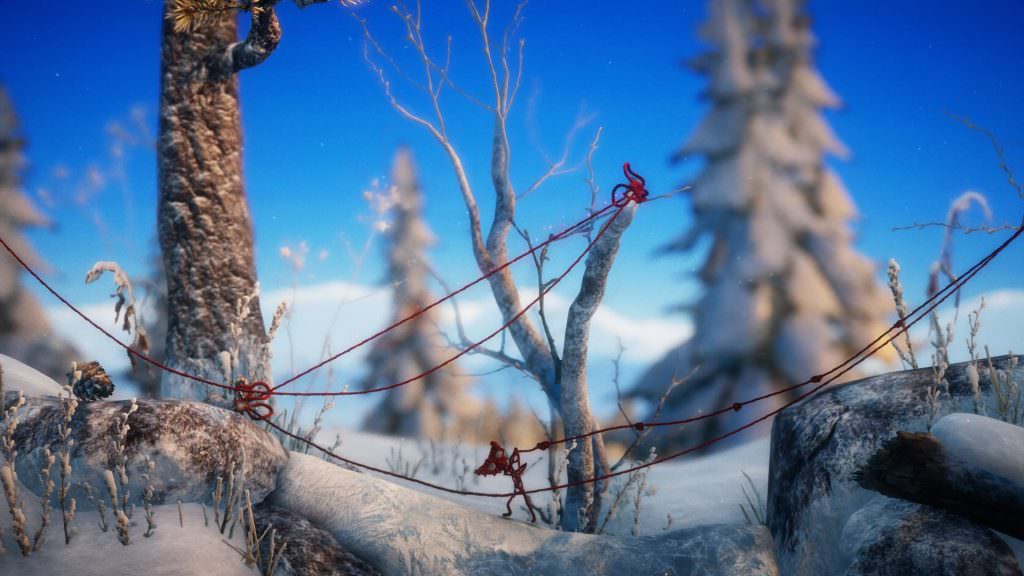 The puzzle mechanics of the game rely heavily on physics as you have to use the string Yarny is made of to solve the puzzles. I think the game physics and movement are excellent and really help to add dimension to the game. I enjoyed solving the puzzles, especially redoing the levels in search of the bonus buttons. The levels are very well designed and encourage players to look for secret areas or little extras, without breaking the flow of the game.

What Unravel lacks in a defined narrative it makes up for with very emotionally compelling gameplay. The detailed graphics allow the developers to create a fully formed world for Yarny to live in without a lot of narratives to lean on. Throughout the game, we see snippets of memories, presumably about the family of the old woman whose ball of yarn borne Yarny during the opening scene. The game really is just a simple adventure story about Yarny leaving his home for the first time.