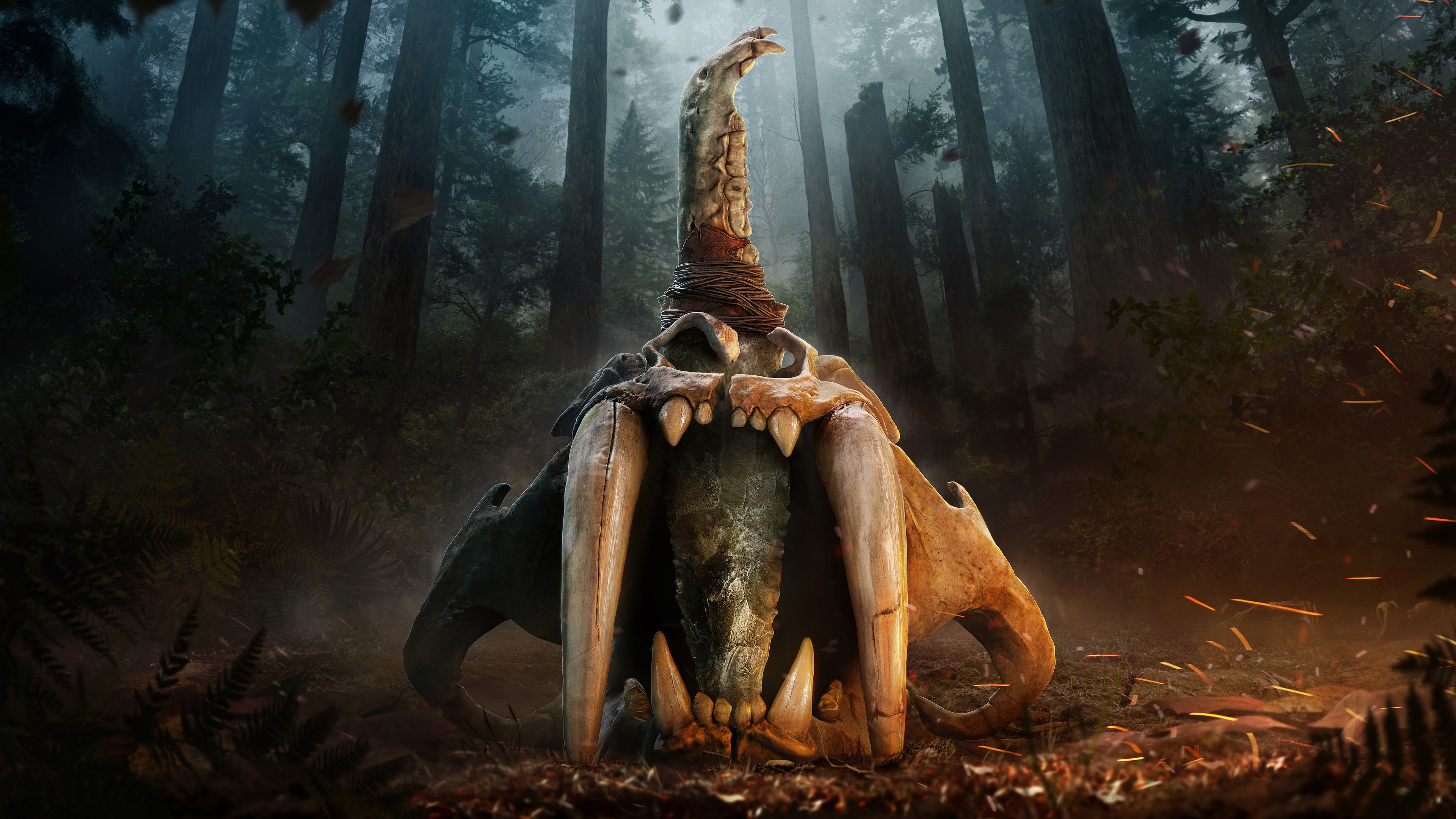 I’ll be honest, I really didn’t think this game would make much of an impact when it was first announced. I couldn’t see how a Far Cry game set 10,000 years in the past would actually work but it does, and splendidly!

Far Cry Primal opens with a beautiful countdown to 10,000 BC with past historical events whizzing by. Players are then introduced to the game with a tutorial, which is surprisingly pretty good! This is something a lot of game studios are finally catching up on. Players take on the role of Takkar, one of mans ancient ancestors — and when a routine hunting trip goes about as badly as it possibly could, Takkar finds himself in the prehistoric land of Oros. While this new land initially seems like a paradise, it’s anything but: not only is it teeming with vicious beasts of all shapes and sizes, a number of different tribes have declared war on Takkar’s already weakened people.

Once players are done with the intro, the world of Oros opens up, and you can start playing for real: there are story missions, optional side objectives, drug-induced hallucinations, outposts and hunting for rare skins and resources to keep players entertained. The gameplay mechanics are very much Far Cry; you have to gather animal skin to craft upgrades and gather plants to make medicines, remedies and stimulants. One major change which I quite like is that now you have to hunt for wood and stone to craft weapons such as Spears, Clubs and Bow and Arrows. 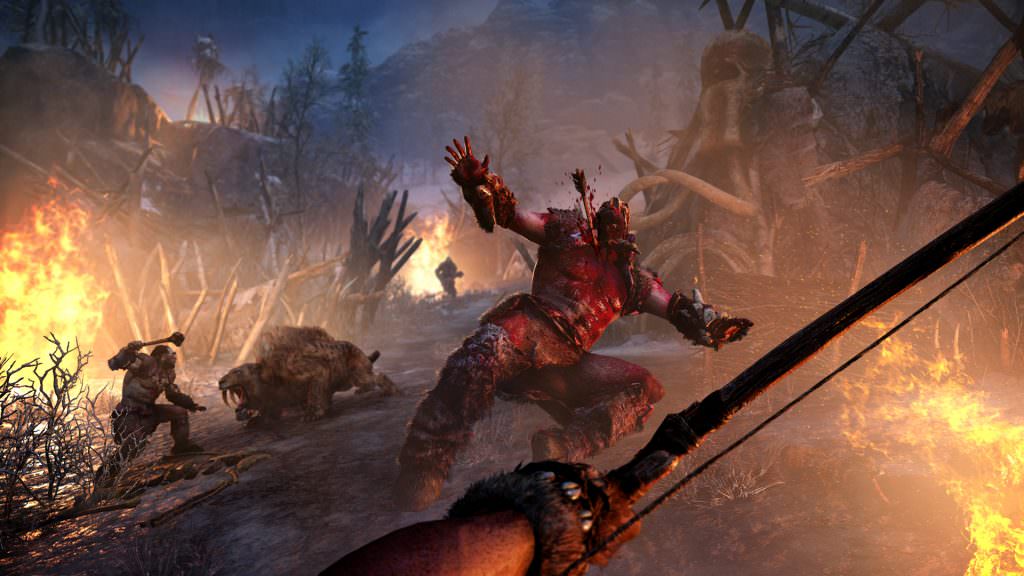 While swapping out the sniper rifle for a bow may seem like a big change it’s actually pretty easy to adjust to. While it does work as a long range weapon, it’s much more effective up close. Far Cry Primals combat system is very much melee based and can be a bit of an adjustment from previous titles. Personally, I feel that the spear packs more of a punch, especially when thrown. The club is also pretty handy and can double up as a torch for travelling during the night or for lighting beacons to expand territory. Keeping in line with previous Far Cry games, each of these weapons can be upgraded to become even deadlier. Damage and health stay relatively the same, except with a new paint job that greatly complements the HUD.

Far Cry has always had bigger predators, most of which are easy enough to take down with enough firepower. In Far Cry Primal, however, there are many beasts that won’t hesitate to attack. I learned early on to turn tail at the sight of a sabre-tooth. Taking these beasts down, on the other hand, yields great benefits, such as their skin, which is rare but essential for upgrades. It’s also possible to tame these animals, which can be handy in a tough fight. 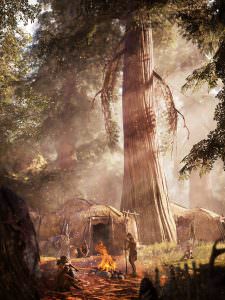 One of my favourite parts of Far Cry Primal was the ability to build and upgrade huts. Building them uses very little resources but the upgrades cost a good bit more, so it really gives players a feeling of accomplishment in doing so. It’s great to watch your village grow as new Wenja keep coming. One great thing about the camp is that settlers will scavenge different items such as wood, stone and plants, and deposit them in a bag each day. This is a great way to stock up on supplies before you go out on a mission or if you’re only a few pieces of wood away from your next upgrade but the amount that is gathered is very small so won’t really make much of a difference otherwise.

Just like in Far Cry 4, while travelling to different locations you pass objectives to save captives that are then added to your Wenja tribe. This is essential as it dramatically increases the number of resources that are gathered each day. It is also a great way to level up your character. 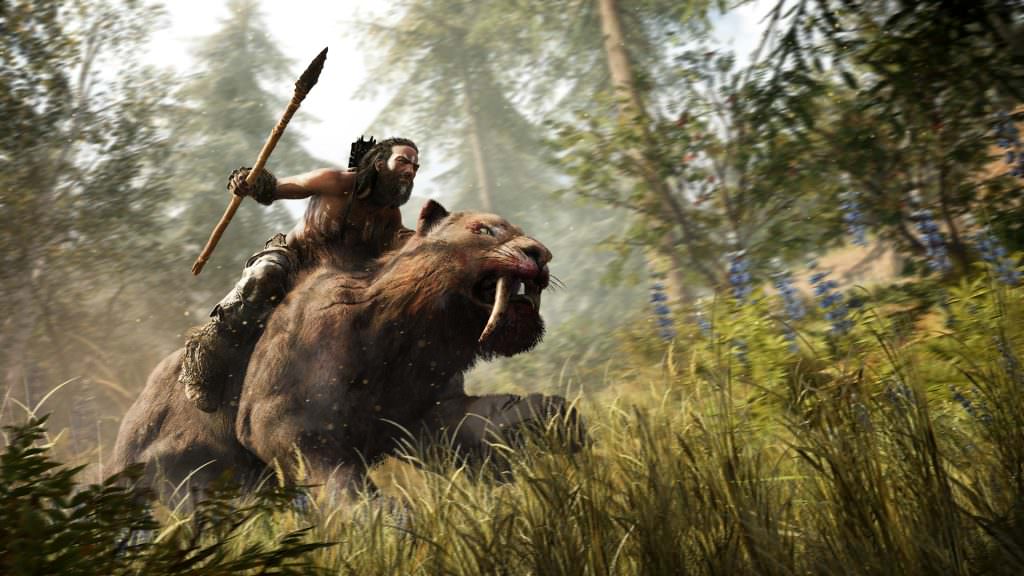 One major difference between Far Cry Primal and its predecessors is the lack of vehicles, replaced instead with mountable animals. While this may seem to be a pretty sweet trade, the animals are much slower and harder to manoeuvre; think back to riding elephants in Far Cry 4. This really comes into play when you’re traversing large areas without the use of Fast Travel, such as in Missions or Undiscovered Locations.

A new mechanic in this game is the ability to tame animals. This ability gets unlocked fairly early on with the Beastmaster skill. Each animal has different talents that can help you along the way. Aside from the obvious mounts, you have wolves that can take down enemies and an owl that can scout ahead for danger and mark them out on your HUD. This comes in very useful later on in the game when stealth is required to avoid large groups of predators and enemies.

One of the areas where Primal is really lacking is the storyline. It makes an appearance to introduce the game and then vanishes, only really reappearing at select intervals between scavenging and seeking out beacons. When the storyline does present itself, it can be hard to follow due to the fact it is all subtitled. I personally love the fact that the primitives have their own language and it makes the experience much more authentic and immersive.

Overall, Ubisoft has done a great job with Far Cry Primal and even though it’s a completely different experience, Primal still contains the core tenants of the series. If you’re looking for a fresh and unique kind of shooter, then Far Cry Primal is definitely it. It’s packed full of more than enough content to entertain the majority of gamers. While the storyline falls short and you’ll spend quite a lot of time searching out collectables post-campaign it’s definitely worth the €60. Have you played Far Cry Primal yet? What did you think? Let us know in the comments!