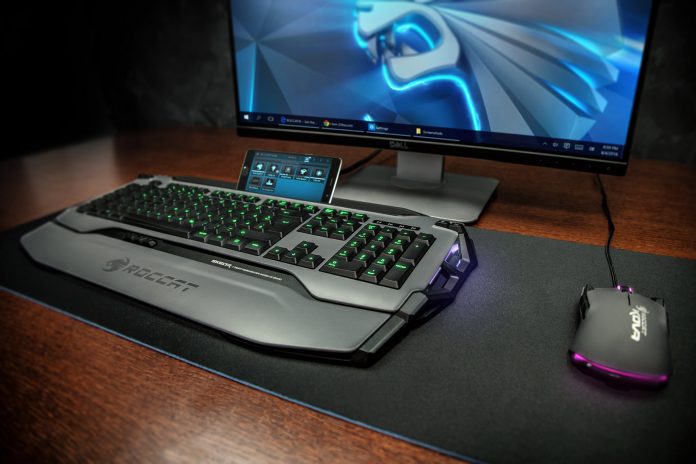 ROCCAT is back with new hardware and had all the new kit on display at GamesCom 2016. I was able to get some hands-on time with the Skeltr, a keyboard that allows you to connect your mobile device, the Sova, a gaming lapboard and Swarm, a new software solution. Here’s a roundup of my first impressions. 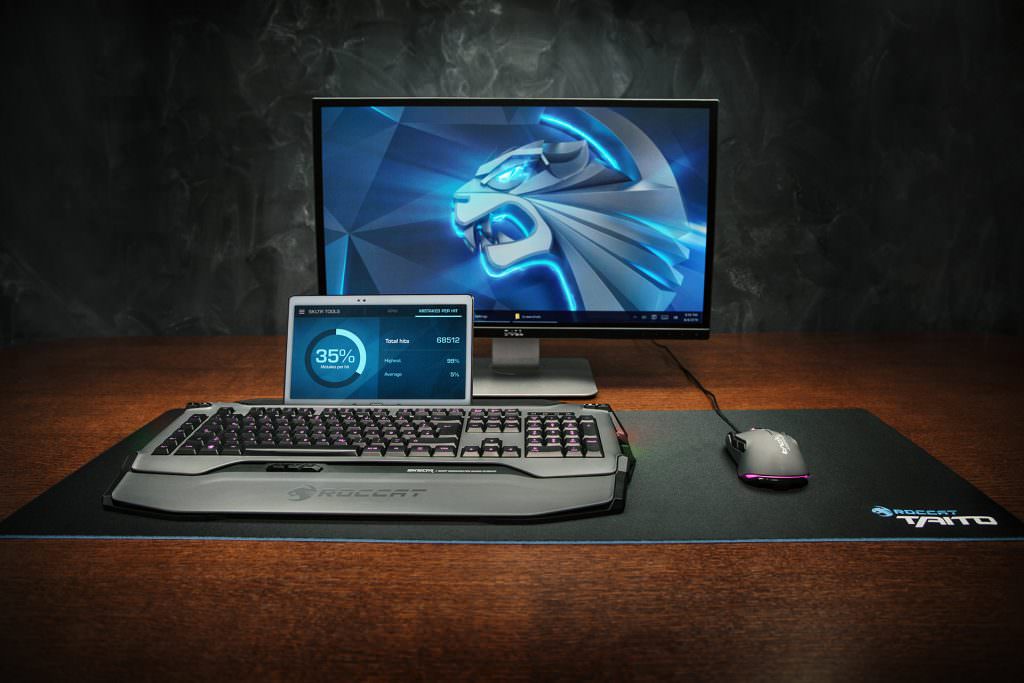 The Skeltr is ROCCATs latest High-End Rubber-Dome keyboard equipped with RGB backlighting. It also has a detachable palm rest and a universal docking slot for smartphones that can accommodate all current smartphones and smaller tablets without any problems. The Swarm app (available for Android and iOS) serves as a communications interface between the two devices.

The keyboard was designed with the idea that smartphones have become part of our daily (and hourly) lives, and pausing a game to respond to a text or use an app is not ideal. The keyboard is equipped with features to help and facilitate its use.

For example, a tablet can be used as a second screen and display statistics about the current game or a Smartphone can have WhatsApp is open. A button on the top left keyboard changes the input between PC and Smartphone. If you connect your smartphone and headset via 3.5mm jack on the Skeltr, the user can answer calls using the keyboard and make calls via the headset.

All the keys on the Skeltr are backlit with 16.7 million different colour options. There are also four RGB LEDs that can be controlled separately on the sides. The keyboard is equipped with Rubber Dome keys which are very accurate and provide the user with a clear pressure point. It also comes with several Macro keys, 5 on the left, 3 on the bottom and 20 dual-programmable keys on the main keyboard, that is, each key on the main keyboard can have a secondary function. These can all be controlled on the fly using the ROCCAT Swarm app.

There us also a USB port on the back of the keyboard that can be used for other devices. 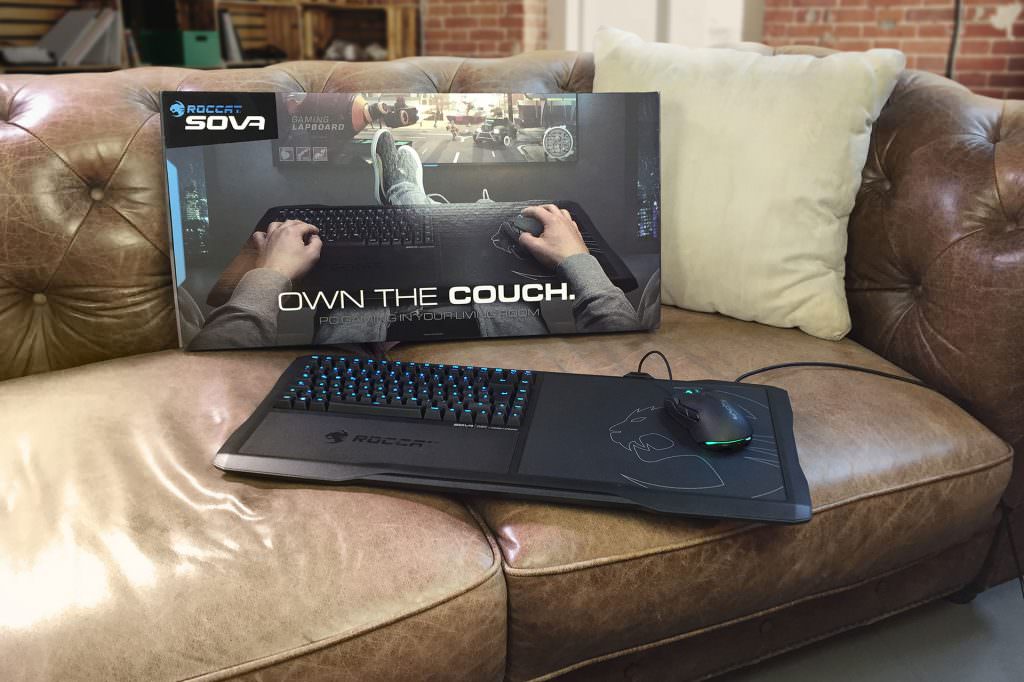 The Sova Gaming Board

The ROCCAT Sova Gaming Board addresses an age-old issue — gaming on the couch. The Sova was in development for nearly two years but the manufacturer thought it was important to create a comfortable product for the best possible gaming experience.

The board itself is 3 feet wide and comes with 4 padded feet for better comfort. It comes in two different flavours — mechanical (MK) or membrane. The mechanical version will cost around €50 euros more. In addition to the different selectable keyboard types, users can also change the design of the mousepad and the palm rest, however, on launch, the selection of styles and materials are very limited. The keyboard is backlit with blue LEDs.

Another great feature of the Sova is that it has a cable channel, as well as a mouse bungee to stow cables and prevent damage while the mouse is in use. There are also two additional USB ports for devices such as mice and headsets meaning you only have one cable thrown across the room. The four-meter cable has an inline release so that it easily separates from the keyboard before it is torn from the user’s lap. 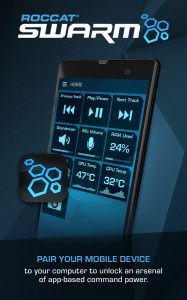 Lastly is Swarm, we spoke briefly about it above when I mentioned changing macros on the Skeltr. Swarm comes in two parts. Firstly, there is the PC software where you can change and tweak every aspect of your ROCCAT hardware and secondly there is the Smartphone App. The app isn’t a standalone piece of software. You must download the corresponding ROCCAT Swarm PC host software in order to use the app.

Swarm is basically an ecosystem where computers, peripherals and mobile devices are brought together in unison for a completely unique experience. It comes with  a host of convenient features that transforms your smartphone into a powerful tool that lets you get the most out of your device. 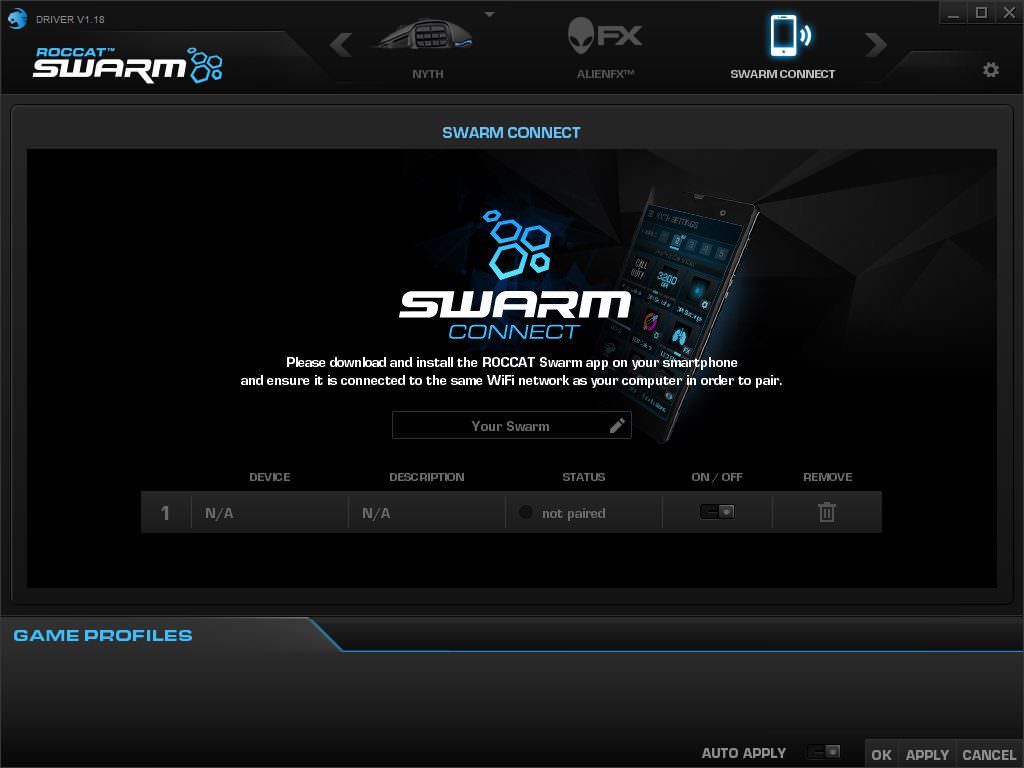