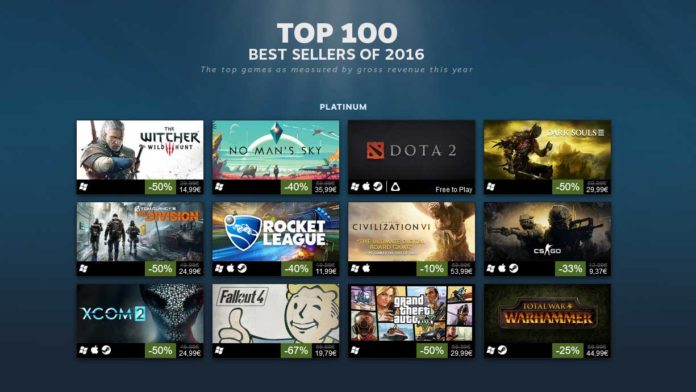 Which games sold the best on Steam in 2016? Normally we need to guess at such titles, looking at current player counts or remembering how certain games peaked and crashed earlier in the year. This time around, however, Valve has announced the Top 100 Best Sellers of 2016 and though most are unsurprising, there are some standouts which might raise an eyebrow.

We don’t have hard numbers on any of the sellers, as Valve merely ranked them in terms of precious metals. The Platinum winners were games like Rocket League and No Man’s Sky, though DotA 2 of course, featured, despite being Free to Play. CS:GO also featured, which is impressive considering its age and puts it alongside the likes of Dark Souls III and the Witcher III.

The Gold category saw ARK, Warframe and DOOM make top appearances, alongside CoD Black Ops III, which should tell you everything you need to know about the more recently released Infinite Warfare. It only scraped by in the Bronze category.

Some impressive indie standouts appear on the list. Early Access title Subnautica is still a big seller, alongside titles like Rust and Planet Coaster which made it into the Silver category. There were much more in Bronze such as  Undertale, Factorio, Don’t Starve Together, The Forest, Slime Rancher, RimWorld, Kerbal Space Program and Starbound.

What games did you buy this year? Did they make the list? Let us know in the comments!