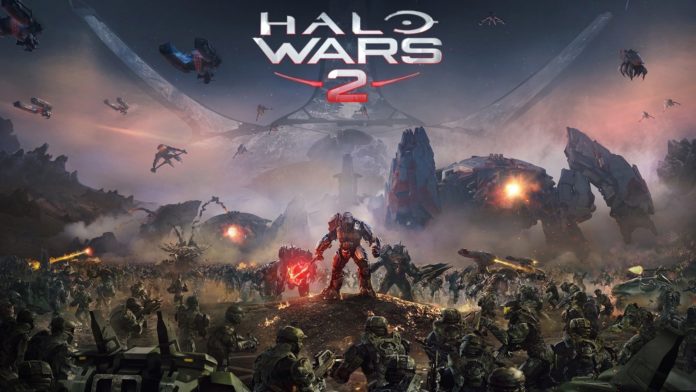 Good RTS games on consoles are something of a rare breed. There was StarCraft 64 in 2000 and the original Halo Wars in 2009 but not too much in between. Sure, there were a handful of other attempts and some decent PC-to-console ports, but RTS games have generally remained in the realm of PCs. Microsoft and Creative Assembly are taking another run at consoles with Halo Wars 2.

Set for release on both console and PC later this month, Halo Wars 2 proudly maintains its console roots, although it is at home on both platforms. We spent some time with a pre-release version, running through some of the single-player campaign and a handful of multiplayer modes, and the gameplay holds up well on both Windows 10 and the Xbox One.

How you interact with the game is the biggest difference, as the PC has the ability to use the keyboard and mouse, while the console is limited to a controller. From a technical perspective, there is no reason why the Xbox One version of Halo Wars 2 couldn’t recognise a keyboard and mouse plugged into the system, but the development team didn’t want to support it, as they feared it would unbalance matchmaking.

As a long time RTS player, I say let the console have the keyboard and mouse. A simple controller filter in matchmaking would resolve balance issues, as you could match solely against players of the same type. I’d be more than happy to wait a little longer to get into a random match if it meant flexibility in control.

Having said that, the menu system in Halo Wars 2 fully exploits the controller. Selecting units is done via the A button, and movement is controlled with the X button. This is the same as the original game, so fans of the series will feel right at home. Unit groups can be toggled via triggers, while the d-pad contains some quick selection options like cycling between bases and squads or going to the last alert. All of the core menus are done radial style, making them easy to navigate with the analogue stick. This may not seem like much at first, but it’s a help when you’re trying to confirm quick selections in the heat of battle. 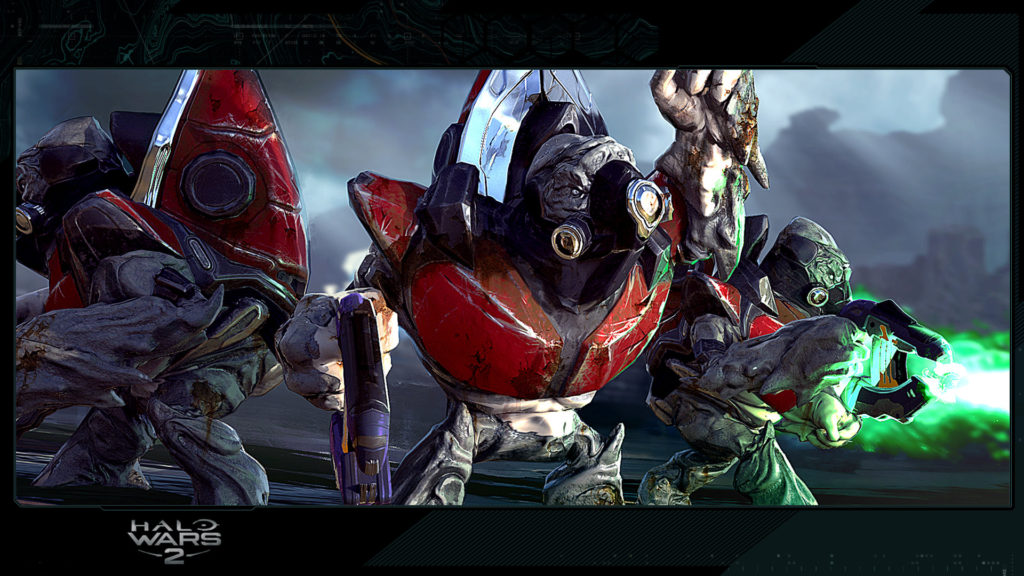 Where the controller still can’t compare to the keyboard and mouse is when it comes to micromanaging your units in battle. To be fair, Halo Wars 2 seems to do a decent job of it in small skirmishes, but in the larger fights, I wanted to switch back to the PC so I could instantly click on whatever I wanted.

The PC shares the same interface as the console, complete with radial menus, though the d-pad is replaced by the number keys on the UI, offering quick select options. The radial menu system works well enough, with one catch. In the beta version of the game, you still had to back out of the menus, just like when playing on the console. Simply clicking off to the side didn’t work.

Combat in Halo Wars 2 generally follows the same “rock-paper-scissors” style of its predecessor, so making proper use of your units is key to winning a battle. Using the wrong type of unit will put you at a disadvantage. Keeping mixed armies is a good strategy, and it’s easier since Halo Wars 2 appears to sport a higher unit level cap than the original. More units on the map has the side benefit of increasing the complexity of play. After all, it’s not just you with the higher cap; your opponents have the same benefit.

Another key change is the fact that energy is now treated as a resource. This means generators no longer gate your tech level. Instead, generators have to be managed just like supply depots to ensure you have what you need to keep pumping out units.

The single-player campaign is where the story unfolds. Expect early levels to hand-hold you a bit, with later levels opening up. Each level has a primary objective that is needed to secure a win, but there are also optional and bonus objectives that add to your score. An optional objective may be something like destroying the opposing team’s base, while a bonus objective may require to you complete a specific action, such as destroying a certain number of vehicles of a specific unit type. 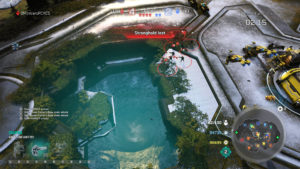 Our multiplayer time was spent on a local LAN, and we focused on 3v3 matchups. My favourite was the Strongholds mode, which has the teams fighting for control of specific base locations on the map.

Since the focus is on combat, you start with near-unlimited resources (99,999 of each) and a tech level that automatically increases over time. By forgoing resource management, Strongholds rewards aggressive play and doesn’t reward turtling in any form. 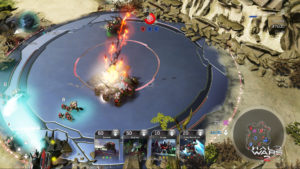 We also spent time in Blitz mode, which was recently available to the public in the form of an open beta. Blitz mode combines the card pack elements of Warzone from Halo 5: Guardians with RTS gameplay. Building a solid deck is just as important as playing well if you want to succeed here.

Card packs are random, and there is no way to trade cards with other players, but duplicate cards don’t go to waste. Instead, when you open a dupe, it is added to your current card. Get a few of the same card, and that card will go up a level, increasing its stats. For example, collecting two “Archer Missiles” cards gets that card up to level 2 and increases the damage output. Collecting two “Warthog” cards upgrades the Warthog with increased HP and speed. Higher levels require more cards of the same type.

Once you’ve built a balanced deck, Blitz can be played against other players or via an unending wave of AI opponents in Firefight, which can be done solo or co-op. At the higher levels, you’ll most certainly want a friend along.

Because units spawn immediately in Blitz, you always have reinforcements at hand, so long as you have enough energy. The catch is making sure the correct card is in your hand and ensuring that the newly spawned units don’t die as soon as you drop them onto the battlefield. New units have limited stats immediately after spawning and only get to full strength after a short wait. You can avoid the wait if you spawn them at your home base.

PC players have long had a solid selection of RTS games, but in the console world, the RTS selection has traditionally been somewhat limited. Here’s hoping that the final version of Halo Wars 2 lives up to expectations and shows developers that there is a demand for RTS games on consoles.