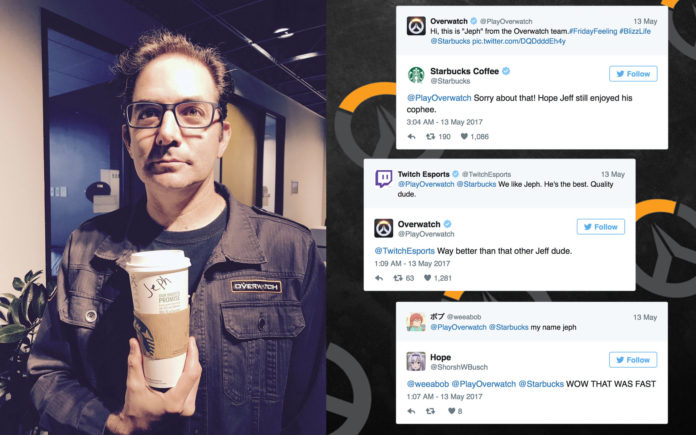 Worldwide coffee chain, Starbucks is known well for misspelling their customers’ names on cups. The longstanding theory is that they do this so you post a picture on the internet and give them some nice advertising. Whether their intention or not there does seem to be some weight to this theory as Jeff Kaplan, CEO of Blizzard proves in the following tweet showing off a misspelt coffee from Starbucks.

Of course, the internet came out and contributed to the error with a wave of tweets showing off what they truly thought. Many of these were in reference to Blizzards successful multiplayer game Overwatch. At the time of writing Jeffs tweet has accumulated over 5000 retweets and will most likely receive a lot more!

Way better than that other Jeff dude.

Sorry about that! Hope Jeff still enjoyed his cophee.

WOW THAT WAS FAST

Do you think this was an intentional ploy for a bit of extra promotion? Did the barista know they were serving the CEO of Blizzard or was this just another happy accident? Let us know in the comments!