“You are playing a challenging and unforgiving game”. So reads the first part of the warning that Darkwood displays as you load into the game. Ok, Darkwood, whatever you say.

“Respect the woods” reads the next line of the warning; during my many hours with the game the woods of Darkwood did a lot to earn my respect

After a brief prologue where I was introduced to the basic mechanics of Darkwood, I awoke on the floor of my hideout. Confident that my 20+ years of video game experience had suitably prepared me for any challenge I might encounter I burst out the door of my ramshackle hideout and sprinted at full speed into the haunted woods with exploration of my new surroundings at the forefront of my mind. I awoke sometime later on the floor of my hideout having had an encounter with a local canine turn unpleasant, after which I trod on a patch of poisonous mushrooms draining half my health before I was finally killed by a moose. I decided that perhaps a more conservative approach was in order.

“Respect the woods” reads the next line of the warning; during my many hours with the game the woods of Darkwood did a lot to earn my respect. In Darkwood you play as an unnamed protagonist in an unspecified part of 1980’s Poland. It is a land that has fallen victim to a waking nightmare inexorably linked to the dense woods that have caged you and several other people inside them. Friends are very rare in this world and trust is something that shouldn’t be given lightly.

A Matter of Perspective

Darkwood is a top down survival horror game; let’s begin with what it gets right. Firstly, the survival aspect, your days in game are spent carefully traversing the labyrinthine woods in order to gather some much needed fuel, food and supplies. In this game the run button is almost exclusively used for extricating yourself from danger, as careless sprinting through the glade can leave you caught in a bear trap. Or accidentally running into the path of an individual who has already fallen victim to the effects of the twisted woods and whose only desire now is bloodletting, specifically your blood.

Once the sun begins to set its time to head home, hopefully with enough fuel to power your generator for the night, enough planks and nails to properly secure your windows and doors, enough scrap metal to construct bear-traps if the barricades fall, and finally, enough curatives in case all of your well laid plans fall apart. The crafting mechanic in this game is straightforward, no frills stuff and the supplies are handed out in a very measured way, just enough for you to survive if used correctly. The developers never want you to feel powerful, and rightly so this isn’t that kind of game. This is a horror game.

This is also one of the few games where roguelike elements fit perfectly with the game’s themes. Sometimes games featuring roguelike elements have me yelling “just hire a Level Designer!” (With so many roguelike games coming out they have to be willing to work for affordable rates). With Darkwood every time you start a new game you are once again lost in the woods, you don’t reliably know where to get any of the necessities to survive and it’s also an excellent way to extend replayability.

A month or so before getting my hands on this game I had watched the gameplay trailer to see what it was all about. Even after watching that very well put together trailer I was sceptical about how much fear a top-down view could actually evoke, I assumed that the view would lead to a feeling of separation from the environment and the action, thus causing all tension to dissipate.

I was certainly mistaken on that point; the developers have made the view work to their advantage in very creative and effective ways. While walking through the forest your character’s field of view is represented by a triangle in the direction that they are facing. In this triangle, you can see the rich greens of the grass, and what is beneath the canopy of the trees around you.

while at home, at your workstation, you will hear footsteps in other rooms of your house, doors opening and closing, despairing voices floating in, all sounds designed to keep you on edge and aware of the danger

Your view is broken by objects in the world, you will never be sure there is nothing behind the tree in front of you and navigating one of the games several cornfields is a tense affair. The other 75% of the screen is the game world depicted in different shades of greys and blacks. The game constantly reminds you of how little of your surroundings you are actually aware of at any time. Whenever you hear the crack of a twig in the surrounding forest you are liable to whirl around and make sure no twisted psychopath has broken through the treeline and is barrelling towards you.

When playing horror games one of the first things that I will hone in on is sound design, primarily because it is one of the few genres I make an effort to play at night wearing headphones, in order to get as creeped out as possible, who doesn’t like a good scare? If the game is effective enough then usually my next play session will be at 2pm with the curtains open, and ideally at least 2 other people in the room. This is a genre that has a lot of down time in the games, building tension; even the act of walking down a corridor can be elevated with great sound design. The sound design in Darkwood is top notch, the aforementioned snapping of twigs, the ambient noises of the wood while you walk along, the growls off in the distance warning you of packs of dogs circling their territory, or the sickly squelching of some unspeakable acts happening in the haunted trees. 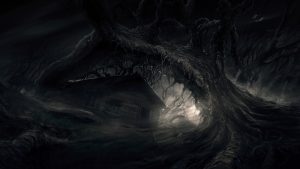 The sound design is also very creative, while at home, at your workstation, you will hear footsteps in other rooms of your house, doors opening and closing, despairing voices floating in, all sounds designed to keep you on edge and aware of the danger that you are in. At night it gets even better, somehow the sound of footsteps outside your house is even scarier; there are thumps and howls, the frantic muttering and squealing of people whose minds are lost to them. There were some standout moments, for example, it was another night at home in Darkwood, I was pressed in a corner listening to the orchestra of night terrors just outside my window, when suddenly all was quiet. Then the knocking started. This wasn’t the violent angry knocking of a 7 foot tall hell spawn intent on rending me apart; this was polite, patient, almost friendly. It didn’t stop until morning.

Having gotten all the good points out of the way, and all things considered, this is a good game; there are of course some issues. The most major one which at times hampered my enjoyment of the game so much sometimes I would look for reasons to walk away for extended breaks. That issue is the extremely clunky way combat is handled. There is absolutely no reason that swinging your melee weapon should be anything more than clicking LMB and if you disagree with me I will fight you (in the comments). As it stands in order to swing your weapon you hold RMB, which causes your character to draw back his hand and then you click LMB when you want to swing it. Bear in mind that you are swinging at a very fast moving target that usually has more reach than you and if they hit you first your drawback is cancelled and you have to pull back again.

There is a secondary attack bound to the Centre Mouse Button but using this will completely drain your stamina in two swings thus killing any chance you had to flee (and your character as well) Bizarrely this is a less powerful attack than your standard attack. It’s fine for a game to be designed to dissuade me from engaging in combat. Your characters tiny health-bar makes it clear that he is not a tank and can only take a miniscule amount of damage; the problem is that occasionally combat is unavoidable. If you are going to force me into combat you have to at least give me the ability to defend myself. Of course a video game should have a skill barrier, and of course there should be difficult games but the clunky controls make the difficulty seem artificial and purely down to very questionable design choices.

The second big issue I had with Darkwood is how obtuse it is when it comes to directing the player to their next narrative objective and some other game mechanics not outlined in the prologue. The last part of the warning tells you that the game will not lead you by the hand, I don’t need a glowing line to follow, but not leading me by the hand and blindfolding me then spinning me around in a circle are not the same thing.

At the beginning of the game, very soon after I awoke in my hideout there was internal dialogue from the player character about his newfound desire to consume “red pulsating mushrooms”. The first thing I assumed was that it was the forest messing with my head and trying to get me to rot my brain with poisonous mushrooms. No. As it transpires (ok fine, after I looked it up on the internet, happy?) gathering a certain type of mushroom and bringing it back to the oven in your homebase was the games levelling system. I can live with the game being unclear as to what to do next when it comes to the story, which can work well when a developer wishes to create a sense of confusion and unease in the player. However, why be cryptic about something as basic as the levelling system? I just can’t fathom that.

What we have in Darkwood is a game with some great design let down by some very poor design, first and foremost the dreadful controls that keep it at least an arms –length from greatness. If however, horror is a genre you enjoy (and you aren’t too proud to consult a wiki occasionally in order to find out what you’re supposed to be doing) in Darkwood you’ll find an enjoyable game with a wonderful atmosphere and enough replayability to keep bringing you back. The price of admission is also very reasonable at €13.99 on Steam.