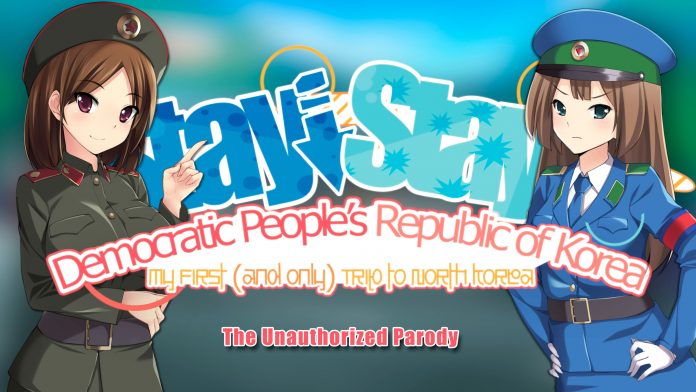 The beautiful thing about dating sims is that there’s so many that no matter how niche your interests, there’s something for everybody. Cute high school girls? Check. Alpacas? Check. Dads? Check. Keiji Inafune’s fictional niece? Check. But in a world deprived of dating sims about cute North Korean tour guides, DEVGRU-P’s Stay! Stay! Democratic People’s Republic of Korea! happily answers the call nobody made. 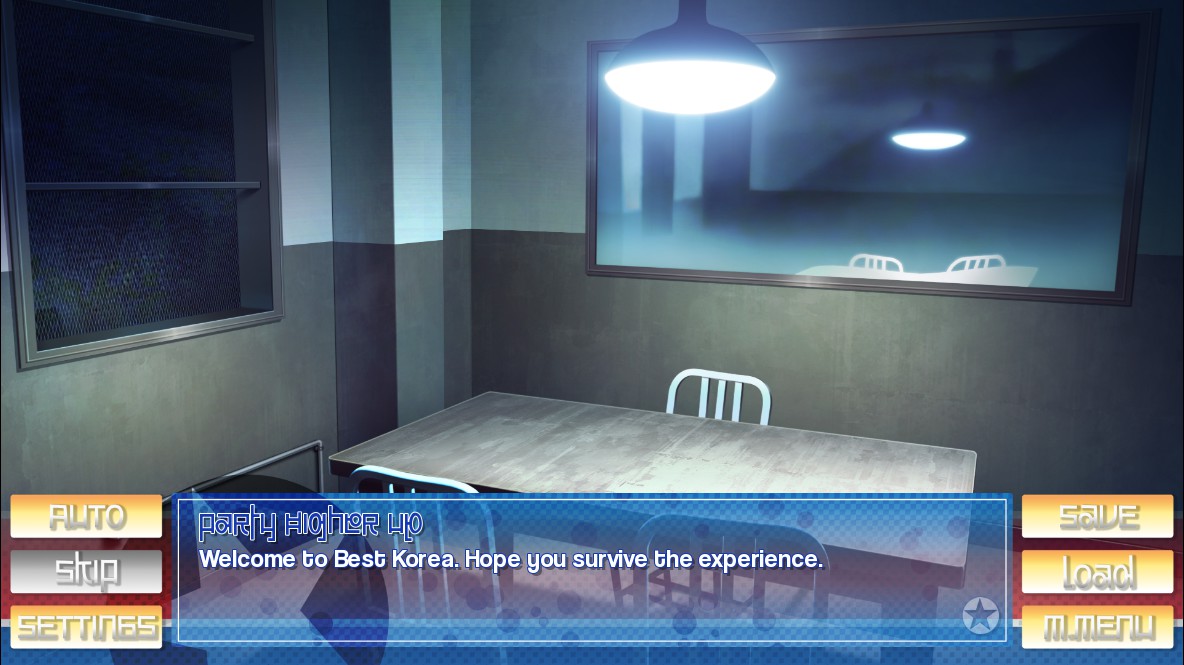 You play as an American soldier (you get to choose his name–I named him Kim Jong Un, but his default name is Donald Trump) visiting his pen pals in North Korea. The only issue is that our protagonist thought that “it was all one big Korea” and that “we were all allies” and had “never heard of hostile attitudes [from North Koreans] toward Americans.” He also had no idea his pen pals were a couple of cute sisters (Dense protagonist is check). You’ll play as the protagonist as he tries to avoid getting shot, arrested, tortured, or turned into a political prisoner whilst trying to woo the sister of the player’s choosing by taking them on dates across North “True” Korea.

If I had to compare the humor of Stay! Stay! to anything, it’d be a parody filled parody with parody icing, parody sprinkles, and a parody cherry on top. By the way, did I mention that Stay! Stay! is a parody in every sense of the word? It’s not only a parody of Go! Go! Nippon (a visual novel in which you play as a foreigner on a trip to Japan), but it furthers itself in its steep journey down the slippery parody slope by blatantly parodying common dating sim tropes and North Korean government itself. It’s literally a generic dating sim made into a comedy thanks to its setting–and it’s fantastic. Don’t believe me? Think about a generic beach episode/scenario–think about the most basic one you can–and now think about it if it were in (an exaggerated, comedic version of) North “The One True” Korea. Think about everything that could (and likely will) go wrong, think of how all the nuances of this scenario would change purely because of its new, military-charged setting. That is the true essence of this game. 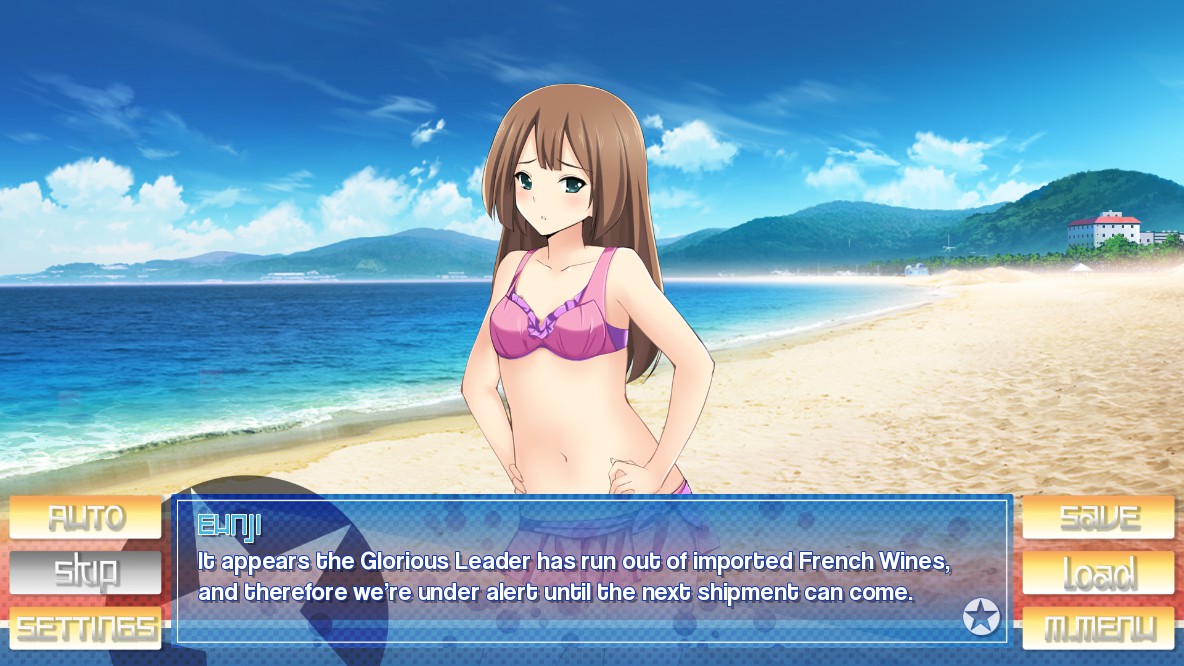 I feel obligated to mention, on that note, that if you were hoping that this game would be a serious representation of the oppressed state of North Korea, you should avoid this game like the plague. Although the game does allude to and reference some of the serious issues going on in the general public of North Korea (EX: starvation, political murders, torture, excessive propaganda, an overwhelming military presence) it never focuses on them in a serious light for more than, say, a line or two. In a weird, parody-charged way this game does raise a certain degree of awareness for the issues going on in North Korea (if you’re somehow like the protagonist and have no idea what kind of state North Korea’s in, that is), but always in the lens of parody.

Stay! Stay! is, above all, entertaining. Whether its a day at an amusement park with periodic power outages or just a night in with your pen pals playing an offbrand version of Monopoly in which you destroy Capitalism, Stay! Stay! is a game that takes full advantage of its setting and the potential for comedy within it.  Its relentless in its comedic dedication, and its efforts pay off in the strongest way.

Putting the comedy aside for a bit though, Stay! Stay! is a solidly made visual novel. The writing, as I’ve already talked about, is steadfast in its mission to get you to laugh so hard you cry capitalist tears. The art is incredibly solid–the backgrounds, especially. You almost wouldn’t think you were playing a dating sim set in North Korea if not for the military uniforms and flags everywhere. The characters both feel like North Korean versions of generic dating sim characters (which, again, falls into line with Stay! Stay!’s brand of comedy and it works wonderfully). Soundtrack and sound design aren’t spectacular, but get the job done. 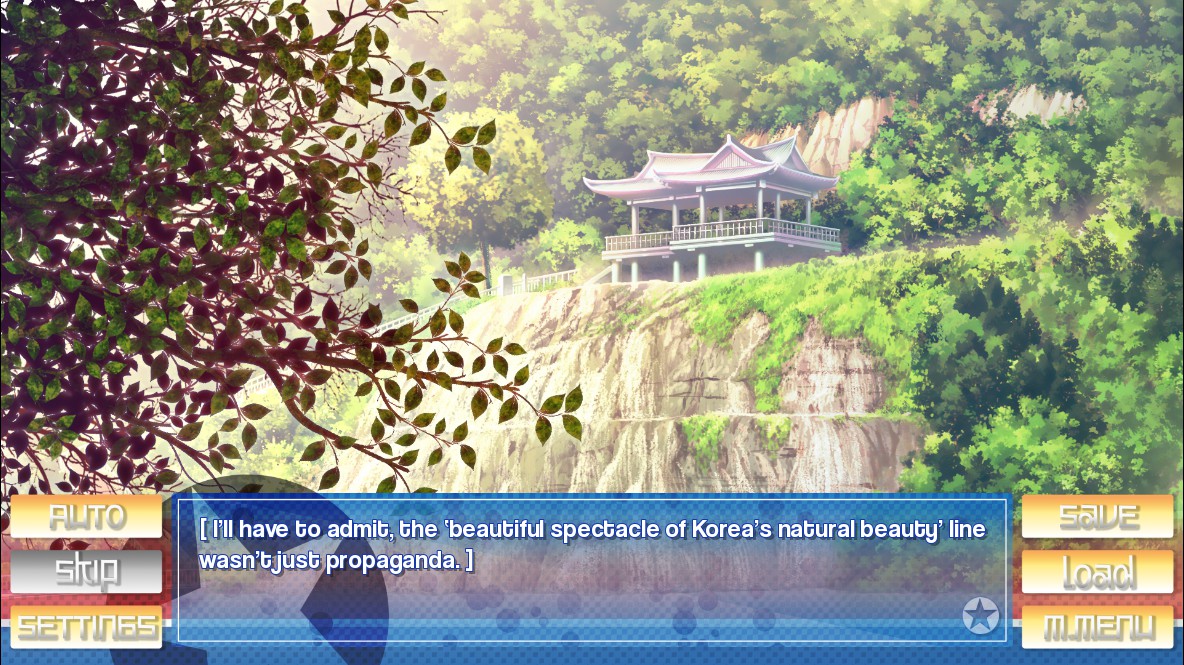 But sadly, not every game can be as perfect as the characters in this game claim North “Best” Korea is. I do have a few small nitpicks with it that are worth mentioning. First is the degree of its self-awareness–more specifically its fourth wall breaking–in this game. This is very much a small nitpick and an issue I doubt most people will have with it, but lately I’m just getting sick of this trend of games breaking the fourth wall arbitrarily–and usually only for 1 or 2 negligible jokes. The comedy of Stay! Stay! is already so true to itself that I feel that these occasional moments of fourth wall breaking are incredibly unnecessary. There’s not a ton of them, to be fair, and they’re not terribly distracting when they are around, they just feel unnecessary to me. Like a small, removable stain on an otherwise great game.

Additionally, there are scenes in the game that go on just a little too long to deliver the same comedic punch as others do. Timing is everything in comedy, and although the date scenarios in this game are all brilliantly generic (save for their setting and what happens because of that, obviously), some of them go on just barely too long to be as funny as it could be otherwise. None of them drag on, per se, and none of them feel painful in length, but there were a number of times whilst playing it that I thought, “Yea, that date could’ve been 10 minutes shorter.” In hindsight, it may be because I was anxious to see some of the other date scenarios and I’d felt like I’d already got the gist of the one I was currently in.

Perhaps its due to the setting of this game but I’m genuinely surprised that a game as funny (and topical) as this one is being so overlooked. Although I wouldn’t call Stay! Stay! the best visual novel to come out of 2017 so far (though it’s definitely pretty high up the list), I will say that it’s the most underrated. If you like visual novels, you owe yourself a good 5-hour laugh with this absolute gem of a dating sim. 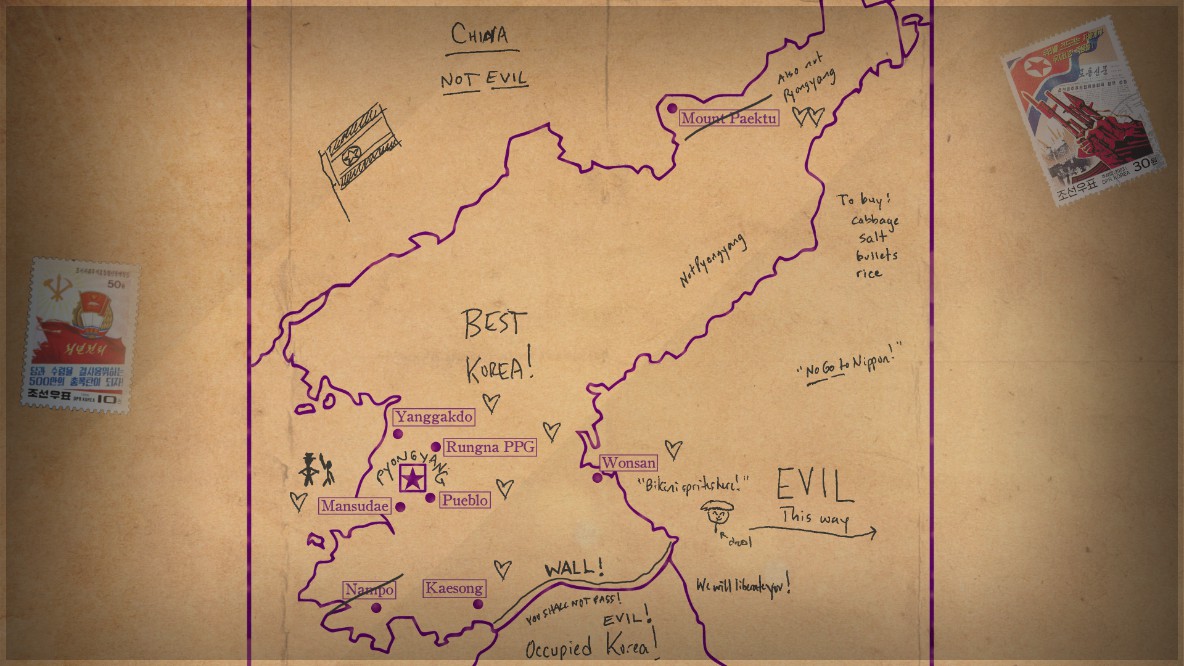