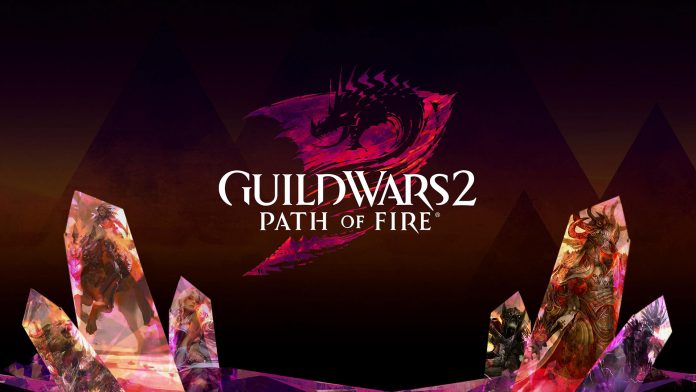 Believe it or not, but Guild Wars 2 has been around for five years already. In that time, it has developed considerably and amassed a huge following. So much has happened since it’s official release; a free-to-play system, a huge expansion and an endgame for more experienced players. Path of Fire, the second expansion, is perhaps less groundbreaking, but unprecedentedly good.

The launch of Path of Fire did not go without its drawbacks. Not only did the servers have trouble keeping up with the demand, but also suffered from bugs and errors, ranging from staggering clips to overall crashes and many had a hard time getting rewards for exploring the world. This isn’t unusual for an MMO, many factors can cause this and go undetected until the servers are fully populated.

Fortunately, the problems were short-lived and we could quickly immerse ourselves in the new world of Guild Wars 2. For the veteran Guild Wars players, the new areas will be known. They return to the dusty Crystal Desert, known for Nightfall, and the adjacent Elona, the land of the Golden Sun. 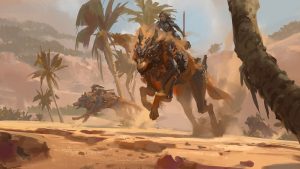 The new Path of Fire expansion seamlessly adopts the ongoing story of Guild Wars 2, which calls the creators the ‘Living World’. The Living World is actually episodic content that adds a new set of missions to the big story. Those who did not play last season are therefore left with some confusing scenarios at the start of the expansion. Soon it is clear that the God of War intends to kill the dragons of Tyria, which is suddenly bad for the world. Remarkable for returning players because in recent years GW2 players were just busy eradicating the big dragons. Occasionally in the story, the reason behind this is explained, but it is undoubtedly an advantage if you first played the previous episodes.

Once in the story, it is clear that ArenaNet doesn’t cling to it. Thanks to the good voice actors and the alternate missions, this story almost feels like a single player RPG. It’s not the most original plot ever, but thanks to the humour and variation in the activities, it certainly does not feel like extra work.

Heart of Thorns introduced the Mastery system. The level cap is and will always stay 80, this is where Masteries made their debut. This is a way to progress your characters without increasing the level cap. ArenaNet introduced this to players when time went out of the first expansion. This way you could learn Gliding or learn to talk to certain races in the jungle. This time, Path of Fire has something different for us: Mounts!

Mounts are thus the new Masteries. When people think of mounts within a MMORPG, they think of games like WoW, where these majestic animals serve as a speed bonus or used to fly. ArenaNet has other plans. Mounts do not just serve as a speed bonus in this game, but they all have their own skills and masteries to level. You need them to explore the Crystal Desert and they make old content a bit more fun and accessible to your alt characters. ArenaNet announced four mounts, with a fifth ‘secret’ mount that was later found by players in-game.

Many fans thought that getting a Mount would be a complete task, well, that’s not the case! You get the Raptor, your very first mount, during the first story mission. The others can be obtained from Vendors if you complete a task of theirs. These cost a few Trade Contracts and Gold. The fifth and also ‘secret’ mount costs a lot of time and money. You need 250 Gold, you have to finish the storyline and do a whole lot of Bounties or other things to get it.

Once you finally have this beautiful, flying animal, you have the ultimate mount (along with a strong sense of accomplishment). Mounts feel like the best addition of the entire expansion. You need them to explore the new maps, but you can also use them to play old content. It makes previously difficult areas much easier to explore and makes world completions much faster.

This is the first one you get. The Raptor is capable of jumping long distances, such as large gaps on over canyons and ravines. The raptor is the fastest mount available. The masteries add increased jump distances which are required to access certain areas in the Crystal Desert. Each Mount has an attack that you can use to open fights with enemies. For example, the Raptor can hit enemies with their tail and then fly into combat mode immediately.

The Springer is essentially a large jackrabbit. As the name suggests, this mount is used for jumping at great heights. Just as the masteries allowed the Raptor to jump farther, they let the Springer jump higher. Bugs Bunny’s opening attack causes him to jump into the air forming a ball and then plunging down to knock back your enemies. The only downside to is that this Mount is sometimes a bit difficult to handle on thin beams or surfaces.

This Manta-Ray allows you to hover over the water. But that’s not the only option. In Guild Wars 1 you had the desolation, a piece of desert with heavy pools of toxic sand that you can not walk through. When the time in the first part of Guild Wars we used the Junundu Wurm as a kind of Mount that let us explore the Desolation. Now the Skimmer takes over this! At the third level Mastery, you can hover higher to reach certain islands.

This “Teleporting Wolf,” as Reddit calls him, is a wolf-like Mount that is created by loose magic held together by runestones. These stones are magically created by the Djinn. This breed is also a clever lore throwback to Guild Wars 1. The Jackal can teleport forward to advance faster and jump over certain pieces of mountains. The difference between the Jackal and the Raptor lies in the fact that this Dolfje Werewolf is a little easier to land on narrow or short pieces. Besides that, the speed of the Raptor is faster! The third Mastery allows you to jump through sand gates to get to areas you can not even reach with the Springer.

This “secret” Mount was discovered after several days by adventuring players. The Griffon was present in the leaked images for the expansion release but never made it into the official announcement. Naturally, players assumed the Griffon wouldn’t make it into the final release. It also costs 250 gold and requires quite a lot of time to get it. But a flying Mount in Guild Wars 2 is the best design I’ve ever seen in a MMORPG. The Griffon is not just a flying mount, but it also takes some skill to keep him well under control, which made me very excited about the Mount.

The addition of mounts is not the main focus of Path of Fire. The biggest update is the massive new areas you get to explore. These feel like a relief after the pounding (and challenging) jungle of Path of Fire, and ‘Orr’. Instead of the mega and meta events of those areas, where you were always very dependent on large groups to progress, Path of Fire returns to the formula that worked so well in vanilla-GW2.

Back are the hearts on the map. The ones you fill by performing a good deal of good deeds and tasks. If the heart is full, the merchant of that area is available for rare bonuses. These hearts act as side-quests, each one with a different task to complete. And the best part is, you don’t have to do it alone. At peak times there are usually a few people running around completing the same goals so it makes it easier (and faster) to get stuff done.

Events also return to their roots. Instead of abstract big goals, it is now clear what is expected of you and your coinciding companions: protect the NPC; defend the farmers on the field; beat the world boss. Again, it is a pleasure to go on adventures and discover the small and larger stories of the world. And again, it’s always fun if there are other players around because everyone who contributes to an event is rewarded and the events become more fun (and more difficult) as more players join.

The expansion also introduced the Bounty system. Every town or big camp now has a Bounty Board. This is where you can pick up bounties to hunt down and kill different enemies and you can do this alone or in a group. You have both Champion and Legendary Bounties. The Bounties give boss-fights more dynamic and tactical responses. For example, you have bosses who spawn certain things to heal him which have to be destroyed in order to reach him. Each boss has a different and unique fighting style that challenges the player to think creatively in order to win the fight.

The overall design of the new enemies and exotic animals is refreshingly good, especially the Forged soldiers. The Awakened, the army of Palawa Joko, gave me the same feeling. The desert is filled with wonderfully-looking monsters, animals and more! 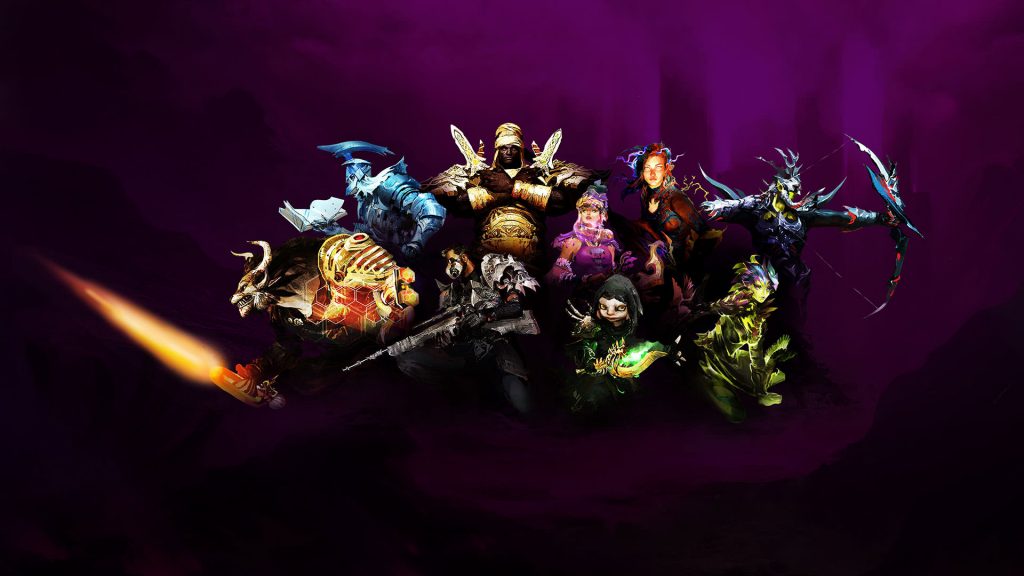 When we talk about Elite Specializations, the extensions for all classes, I chose to start the Firebrand. This is the Elite Spec. of the Guardian. Then I played the Deadeye (Thief) and the Weaver (Elementalist). These specialisations were all based on Lore from the desert. For example, the Spellbreaker was based on the Sunspears and the Scourge on Palawa Joko’s magic. This gave the specialisations more depth and background than that of Heart of Thorns. Again, a feature that I am very pleased with.

The expansion brought new rewards, new armour sets and weapon skins and also a number of new state sets. Besides that, the game got another Guild Hall over Vabbi. Map Design was also a very big plus for me. In the maps, you actually needed the Mounts to see and explore everything. Each area had a strong nostalgic feel as if 250 years had actually passed in-game.

With Path of Fire, Guild Wars 2 returns to his roots. The new zones offer joyful and exciting adventure with much better events and challenges than Heart of Thornes. Mounts are a welcome addition, which adds (again) a Metroidvania vibe to exploring the world. Despite the huge new areas and the very strong story for one player, Path of Fire remains somewhat lightweight. Nevertheless, the return to the design philosophy that made Guild Wars 2 a legendary game actually made reason enough to enter the fiery path.