Assassin’s Creed has been one of the most popular video game IPs since its launch 10 years ago. It’s certainly been among this writer’s favourite series and I’ve played almost every instalment, (the exceptions being Rogue and the side scrolling versions). It is a series that has come in for some (deserved) criticism in its decade of existence. Even the most hardcore of fans suffered from some understandable series exhaustion. Assassin’s Creed Black Flag was the most recent instalment to receive near unanimous praise but some people pointed out that it was the least “Assassins Creedy” of the series. Later series entries Unity and Syndicate would also have problems beyond staleness and lack of variety.

Evidently the issues of fans have been heard by Ubisoft and in Assassins Creed Origins they have taken an extra year and simplified, refined and added to the staple gameplay of the Assassins Creed series. It was a year well spent.

In Origins you play as Bayek, a Medjay who are an ancient order of Pharaoh Bodyguards. I will say that Bayek is a very empathetic and appealing protagonist. Certainly closer to Ezio, and not Connor, or whoever that French guy was, in terms of Assassins Creed Protagonist rankings Bayek is on a quest for vengeance and will stop at nothing… hang on a minute, I’m just going to see what’s over there, huh, a group of bandits, suppose I better dispose of them… Ok I’m back, where was I? Oh yeah, the pharaoh Ptolemy is really being a bit of a…. hmm, I only need three more pieces of leather and I can craft a new breastplate, I might go find some Antelope… I do hope you see what I’m doing here.

Origins does what, (disclaimer) in this writer’s opinion, a well-designed open world game should do. It encourages exploration; you want to see what treasure is hidden in that tomb, what weapons you might be able to loot from an enemy camp, the view from the top of that pyramid, etc. There may be some who criticise a loss of focus on the main story because of the sheer amount and variety of activities available to players in Assassins Creed Origins.

The gameplay in this game is where we see the biggest changes to the Assassins Creed standard. Almost all of it I would consider to be improvements

Certainly a story revolving around revenge seems like something that the main character should be completely focused on, not running over and back for hours without a thought for the wrongs they seem so focused on righting in cutscenes. I have felt it before in other open-world games, sometimes in Fallout 4 when scavenging for aluminium cans and screws I’d speak to someone and see a dialogue option mentioning my child and I’d think “Oh yeah I have a son in this game… what was his name again?”

An Action RPG and Better For It

The gameplay in this game is where we see the biggest changes to the Assassins Creed standard. Almost all of it I would consider to be improvements. Ubisoft has turned Assassins Creed Origins into a fully-fledged action RPG, and I commend them for that excellent decision. There is a complex skill tree here.

Senu can spot mission objectives and enemies, as well as predict their movements. This serves to make stealth a more viable method than in some of the previous instalments

The combat has been given a real sense of weight; something that was sorely lacking in some of the most recent instalments, Unity especially. Here, the player will feel the impact of each strike and need quick reflexes to triumph in some of the more hectic fights. There is a lock-on feature available but I would strongly advise not using it when fighting any more than three enemies. It has a tendency to not want to switch to the enemy that you would very much like it to switch to, because they are bearing down on you and look intent on harm. Special mention to the horseback combat, which has just the right amount of forgiveness.

The choice of weapons in this game has been expanded enormously, from your bog-standard sword, to spears, maces, daggers, and more, each weapon type feels useful and they are all very well balanced. There is a colour-coded loot system ala Diablo, destiny, and 100’s of other video games. Each weapon will clearly display their rarity, DPS and any special modifiers they might have. Your search for levelled loot is what compels a lot of the exploration of hostile areas. Admittedly, it is not completely necessary as you will find plenty of appropriately levelled loot during story missions.

The stealth and spotting mechanics have also been changed and improved. Eagle vision takes on a more literal meaning in Assassins Creed Origins. At any time Jayek can take control of his avian sidekick Senu and scout the surrounding area. Senu can spot mission objectives and enemies, as well as predict their movements. This serves to make stealth a more viable method than in some of the previous instalments, as you can assess situations more easily on the fly (I would like to sincerely apologise to anyone negatively affected by the preceding pun).

This is an Assassins Creed game, so of course you will traverse the world with parkour. The parkour is one of the gameplay elements streamlined in Origins. Jumping over gaps or onto buildings is now controlled with just one button (X on the PS4) and the player can drop from ledges using the Circle button. You are also able to purchase, camels, horses and chariots to more quickly travel the great distances in Origins.

All of the bugs I encountered fell into the charmingly hilarious category of open world bug, and not the frustrating one

The map is also something that bears mentioning. Sometimes, when playing previous instalments, I would open the map screen and just be overwhelmed by the sheer amount of markers displayed. Where, for example, Assassins Creed Syndicate had 5 different types of collectibles to display, Origins map is a much tidier affair and that is a very welcome change. 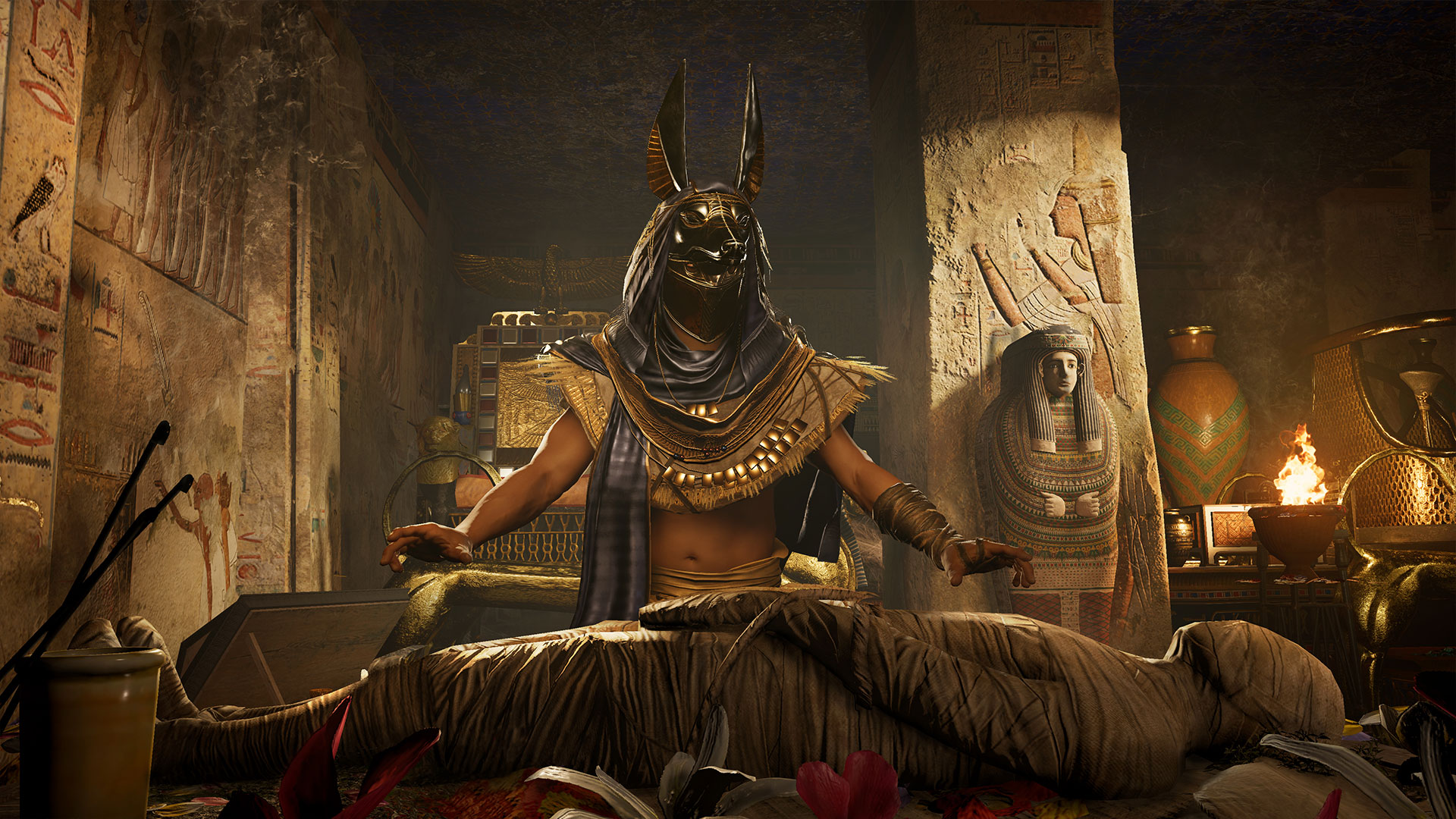 Graphically, Assassins Creed Origins is mostly amazing. The game world is enormous, there’s a great variety to the locations on offer, as well as an excellent flow to the world. Though fast travel is an option, it is worth it sometimes to summon your trusty steed and make the journey yourself. The highlight of many of the Assassins Creed games was the world that they built and the veracity of the depiction of life at a certain era in history. Even the more derided installments had wonderfully detailed worlds that begged to be explored, Origins is no different.

The popup is so minimal that it hardly warrants mention, and certainly doesn’t warrant criticism. There was the odd frame rate stutter, but nothing that ruined the experience. I did encounter some bugs, but this is an open world and that is what happens. All of the bugs I encountered fell firmly into the charmingly hilarious category of open world bug, and not the frustrating one.

Sound is also equally competent in Origins, the soundtrack isn’t too invasive. While using stealth in other games, it is frustrating to be surprised by an enemy you couldn’t hear over a booming orchestral score. All of the voice actors do a great job and the bustling markets all sound suitably alive.

Ubisoft spent a year looking at what needed changing in Assassins Creed. They spotted nearly everything that need to go, needed to stay or needed to change. They took what was becoming a stale franchise, and made it fresh and interesting again. This is not just a lick of paint on old ideas, this is something brand new and exciting. I would not hesitate to recommend this to anyone who had perhaps gotten tired of the series in the past. There is a lot to like here, and not a whole lot to criticise.