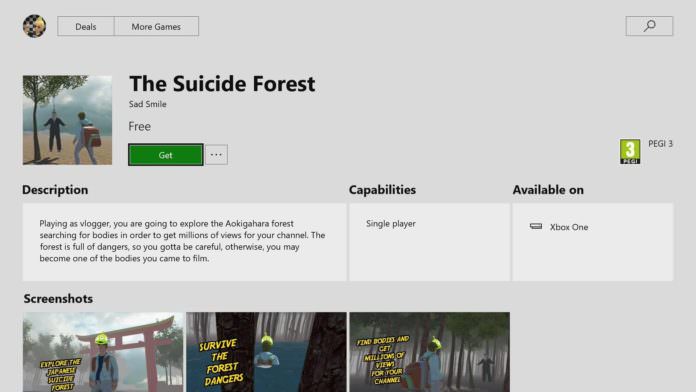 In the Logan Paul game, you play as the infamous vlogger and your goal is to go to the Aokigahara forest to look for a hanging corpse. Finding the corpse rewards you with thousands of subscribers on your YouTube channel. The game was approved for the Xbox Store and even got a PEGI 3 rating.

This is being taken care of.

Replying to someone on Twitter, Microsoft’s Larry ‘Major Nelson’ Hryb announced that the game had been removed and a Microsoft spokesperson made a statement about the game.

“The content of this game is in violation of the policy of the Xbox Store. Users can always report inappropriate content contained in the Store by sending an email to [email protected]”

If you have no idea who Logan Paul is and you only discovered the internet earlier today here’s a bit of backstory.

On 31 December 2017, American YouTuber Logan Paul uploaded a video in which he went to the Japanese suicide forest Aokigahara to “allegedly” warn his audience of suicide. In the video, Logan Paul showed a body and showed it with several close-ups, with only his face blurred. He also put this in his thumbnail and the title was as follows: ‘We found a dead body in the Japanese Suicide Forest’.

During the video its clear that Paul and his friends do not take the situation seriously at all. After the video went viral, many celebrities and YouTube stars such as PewDiePie and Jacksepticeye expressed themselves on Paul’s action. Despite the terrible action, the number of Logan Paul subscribers continued to rise.

This isn’t the first Logan Paul-inspired game to hit marketplaces with little oversight. A similar game was uploaded to the Google Play store earlier this week titled Logan Paul: Suicide Forest Run. It was available to download for a short period of time before Google removed it. Sadly, none of this seems to be hurting Logan Pauls career that badly and it probably won’t be long before he releases a video from Syria warning his fans of the dangers of Isis. Think Logan Paul is as bad as everyone portrays him to be or do you think that there is room for forgiveness? Lets us know in the comments!