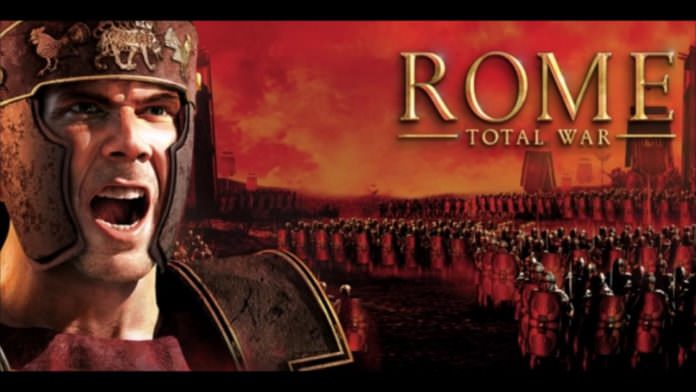 There’s one genre of games that I can just get lost in for hours and hours, ya know an unhealthy amount of time. And that genre is Real-Time Strategy. The number of hours that I have invested in various RTS games both on console and PC taking my civilization from the stone age to centuries later or destroying a certain ring of power, the options are endless.

I know there will be people out there who-when they scroll down can’t believe that I’ve included a real-time strategy game on console but for me, this particular game sticks with me more than most. But let’s start at number 6, shall we?

At number six I’ve chosen Command and Conquer Red Alert 2. This was my first experience of going all-in in an RTS game. It’s also quite topical now given that the US and the Russians are at each other’s throats. It’s been too long since the rest of the world suffered because of these two countries.

If you can’t remember the storyline, then let me refresh your memory. Following the events of the first game, The Soviet Union is in ruins ( surprise surprise). Their leader one Joseph Stalin is dead and now the allies have to think about what the want to do in the region. In the end, they appoint a puppet leader by the name of Alexander Romanov who was a direct descendant of Tsar Nicholas II. All isn’t as it seems though as Romanov builds up the Soviet army with the ultimate goal of a US invasion. It was received to worldwide praise by the large publications regularly achieving 8+ out of 10.

It was quite an innovative game for the time. It was praised by many because what country you chose to play as had positive and negative impacts. Each country had a special unit of soldiers/vehicle unique to them. Resources are key in the game. You mine gems and ore but you can also capture oil refineries to give you a stable income. This game really was the S***. You can get the Command and Conquer Ultimate Edition which includes every game in the franchise for just £5.99 from CD Keys.

Yes, console RTS games can work regardless of what those supposed PC Master race folks say. Developed by Pandemic Studios and Published by The 3DO Company, Army Men RTS received mixed reviews from publications but I found it to be quite addictive. Maybe that’s because I spent a lot of my youth playing with small green soldiers. 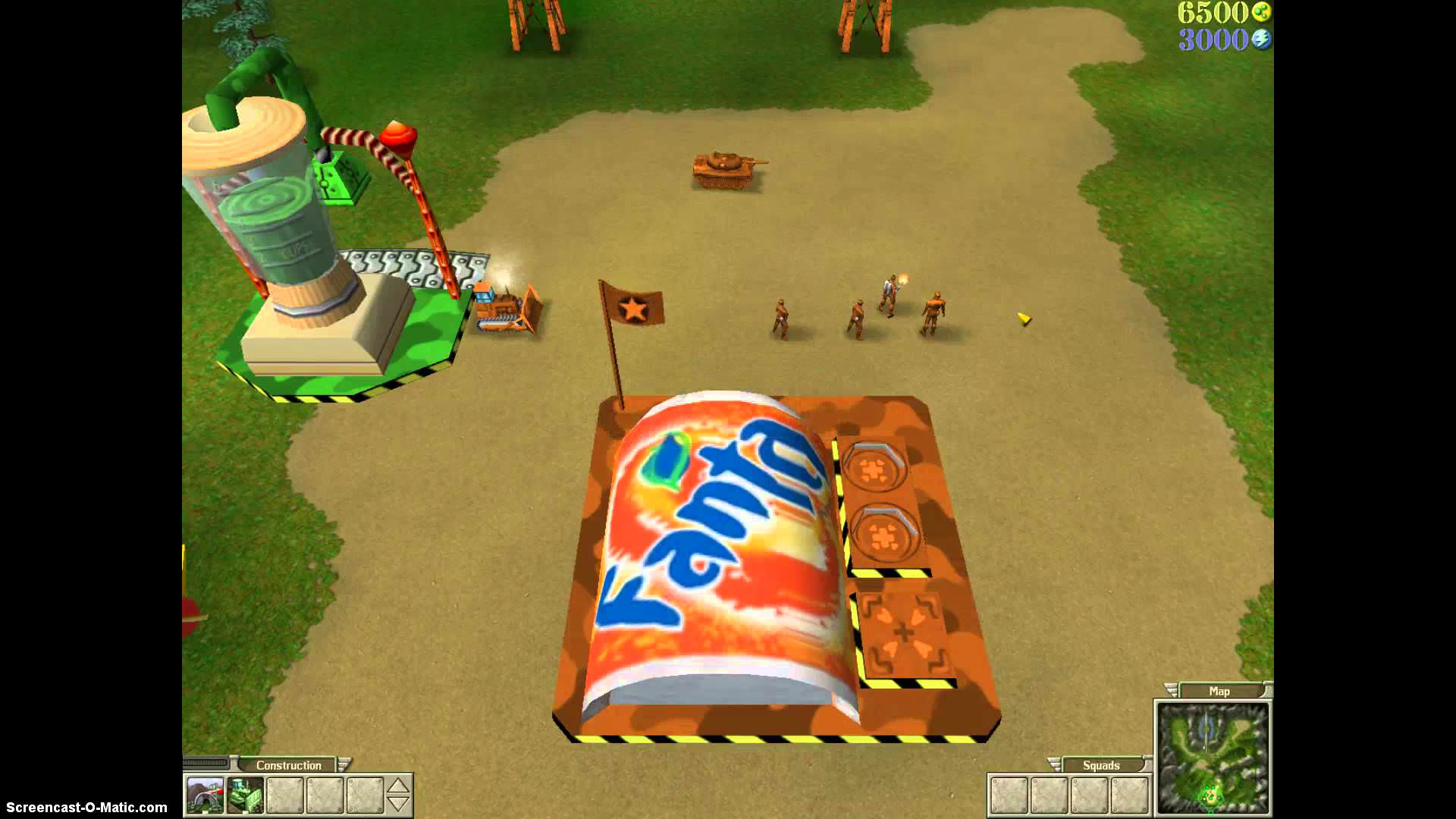 It was a very cleverly designed game to begin with. Everyday rubbish and household items that you’d see on the ground were incorporated into your base. Those loose items on the ground can be used for energy as well. Plastic is needed to construct buildings and units while electricity can be found in batteries and other objects that you find on the ground. Dead soldiers and destroyed buildings also leave a pool of plastic for you to mine.

The story is loosely based on Apocalypse Now. Colonel Blintz has gone AWOL and turned to the Tan side along with the soldiers under his command. He has commandeered a suburban home and turned it into his fortress. It’s up to sarge and his troops to take it back. Army Men RTS is available on steam for the princely sum of £4.69 if you want to give it a lash. 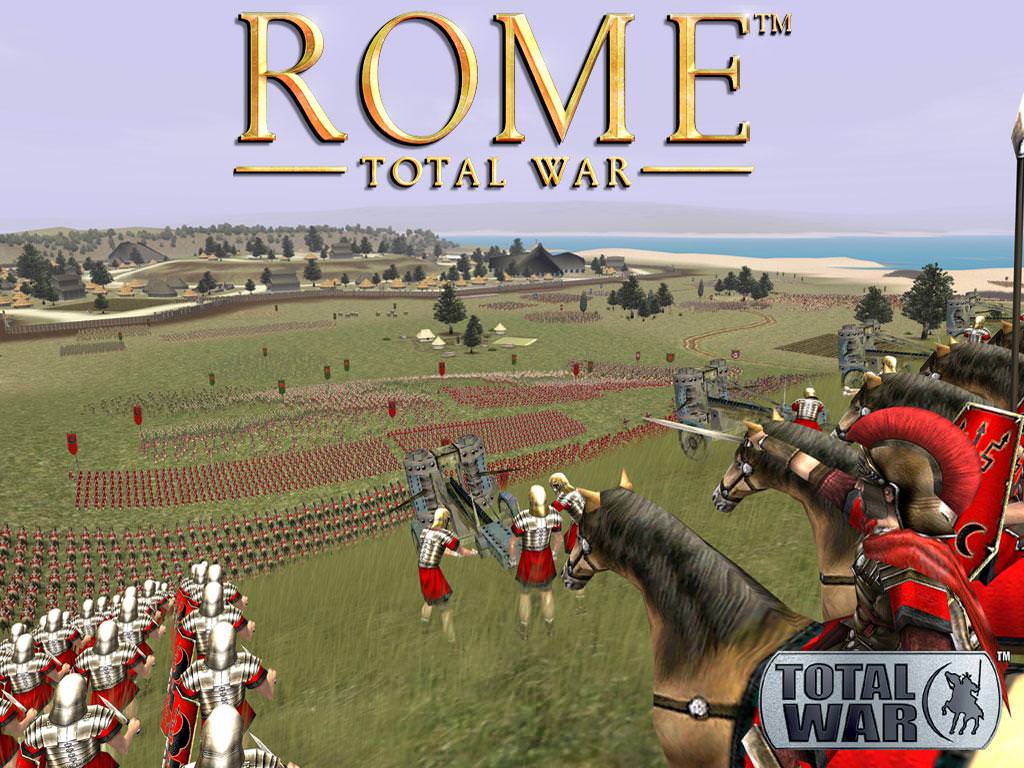 Not only is this a quality game, but you can also learn a bit of history. it’s a win-win for anyone who enjoys Roman history. You start the campaign with a choice of three houses to choose from. Scipii, Julii and Brutii are the three you can choose from with more becoming available as you expand your influence throughout the continent. Each of the Roman houses has strengths and weaknesses along with different provincial land that they control at the start of the campaign.

Everything has to be balanced in this game. Overtaxing a population that you’ve conquered will eventually lead to resistance and possible revolution. The more land you conquer, the more you have to worry about resistance by the local populace to foreign rule. You also have to worry about overstretching your resources because your army will have further to travel to quash any resistance.

While all that detail is very welcome it’s time to get to the meat of what makes this game so special and that’s the battles. The amount of NPC’s on screen at one time is a joy to behold. As some who took Classical Studies in school, I was fascinated to see how accurate Creative Assembly would be in terms of Armour used by soldiers, what types of soldiers/weapons each civilisation had and the formations that they took in battle. And thankfully they did their research as it’s an incredibly accurate game.

Not only is the armour and weapons on point, but they even include real battles, which is a nice touch.

3. Lord of the Rings: Battle For Middle Earth

Is there a more suitable story out there for the Real-Time Strategy genre? Released in December 2004, this game was my entire Christmas and new year. There’s both a good and evil campaign. With 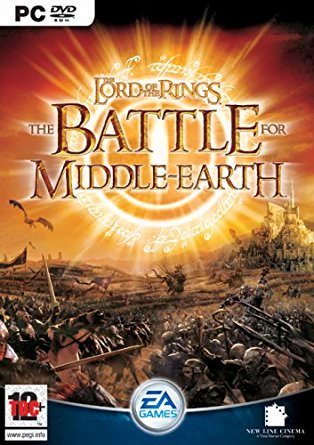 the former following the story everyone knows and loves taking you to all the major locations like Moria, Isengard, Helms Deep and Minas Tirith. The evil campaign starts with Isengard betraying Rohan and follows Saruman and the like, in his quest to dominate Middle-earth. Mordor then becomes playable when attacking the city of Minas Tirith.

I’m an absolute fiend for the world Tolkien created. It’s also rare to have a game that ties into a movie and is so well received by the public.

It narrowly beats the movie tie-in games that came out on PS2 as my favourite LotR game at that point in time. Unfortunately, this game had somewhat of a tragic ending. It Published by EA, but once they lost the rights it was taken off the market never to be seen again. What makes it even worst for me is that I lost my copy of it years ago.

2. Age of Empires II: The Age of Kings

Who says empires have to be a bad thing? I think most people will agree that this was the 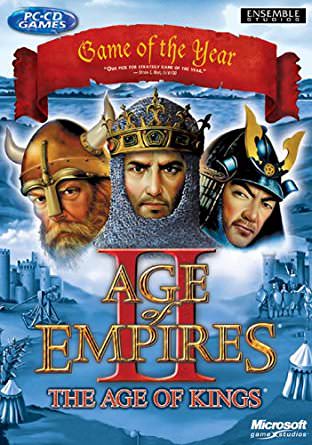 Age of Empires franchise was at its peak, right before the less than impressive AoE III was released.

Players had a choice of 13 playable civilisations as you guide them through four “Ages”: the Dark Age, the Feudal Age, the Castle Age and finally the Imperial Age. In total, these four ages account for about 1000 years.

In order to advance to the next age and have access to better soldiers/structures, you must fulfil a list of buildings required.

The unheralded Villager is the most crucial character in the game. without them, your civilisation will never advance because they are the only ones who are able to collect precious resources so that you can improve structures. Thye can also act as the last line of defence against potential invaders. What also impressed me was that villagers didn’t just respond to orders with the usual “yes sir” or “ok” but instead spoke in their native language which added more depth to the game.

A definitive edition of this classic was released exclusively on Windows 10 platforms last year. It received widespread acclaim which is hardly surprising given it was the same game with high res textures along with improved AI.

1. Lord of the Rings: Battle for Middle Earth II

The best Lord of the Rings game ever made by an absolute country mile. The improvements over the first game in the series along with a brand new story made this my number 1 Real-Time Strategy game. Unlike the first game where you were confined to a certain are to build your base, this sequel allowed a lot more freedom for players. 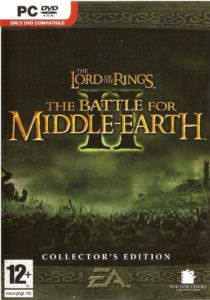 The campaign focuses on the northern territory in Middle-earth where an Elf by the name of Glorfindel learns of an attack that will take place on Rivendell. You have to team up with the Dwarfs in order to defeat this latest threat. The evil campaign sees Sauron send the Mouth of Sauron and the Nazgul north to recruit goblins to help defeat the last resistance in the north.

Getting to play as the dwarf civilisation was a nice change-up given that they are the one group that isn’t playable in the first game.

The level of detail in the sequel went up a couple of notches from the 1st game. Every environment was created with the tiniest of details in mind. Even the armour that soldiers wear seems to be a lot more detailed than the prequel.

Following the success of this game, DLC was released called Rise of the Witch King was released. It focuses on the Witch King of Angmar and how he came to power. Unfortunately, like the first game, EA lost rights to the series and so shut down servers for it at the end of 2010.

So there you have it. Those are the Real-Time Strategy games that had the biggest influence on me. I’m sure there will be plenty of people who’ll be shocked at some that I’ve included but you can’t please everyone. Let me know what Real-Time strategy games that left a mark on you, in the comments below.

Starcraft I & II and Empire Earth are worth hunting down if you want serious classic RTS action.

Also, watch Teh_Pwnerer on YouTube and learn from his über-micro skills.

My youth was defined by never having time to play video games, because I worked for my father from age 7 through Senior year of H.S. ‘_’