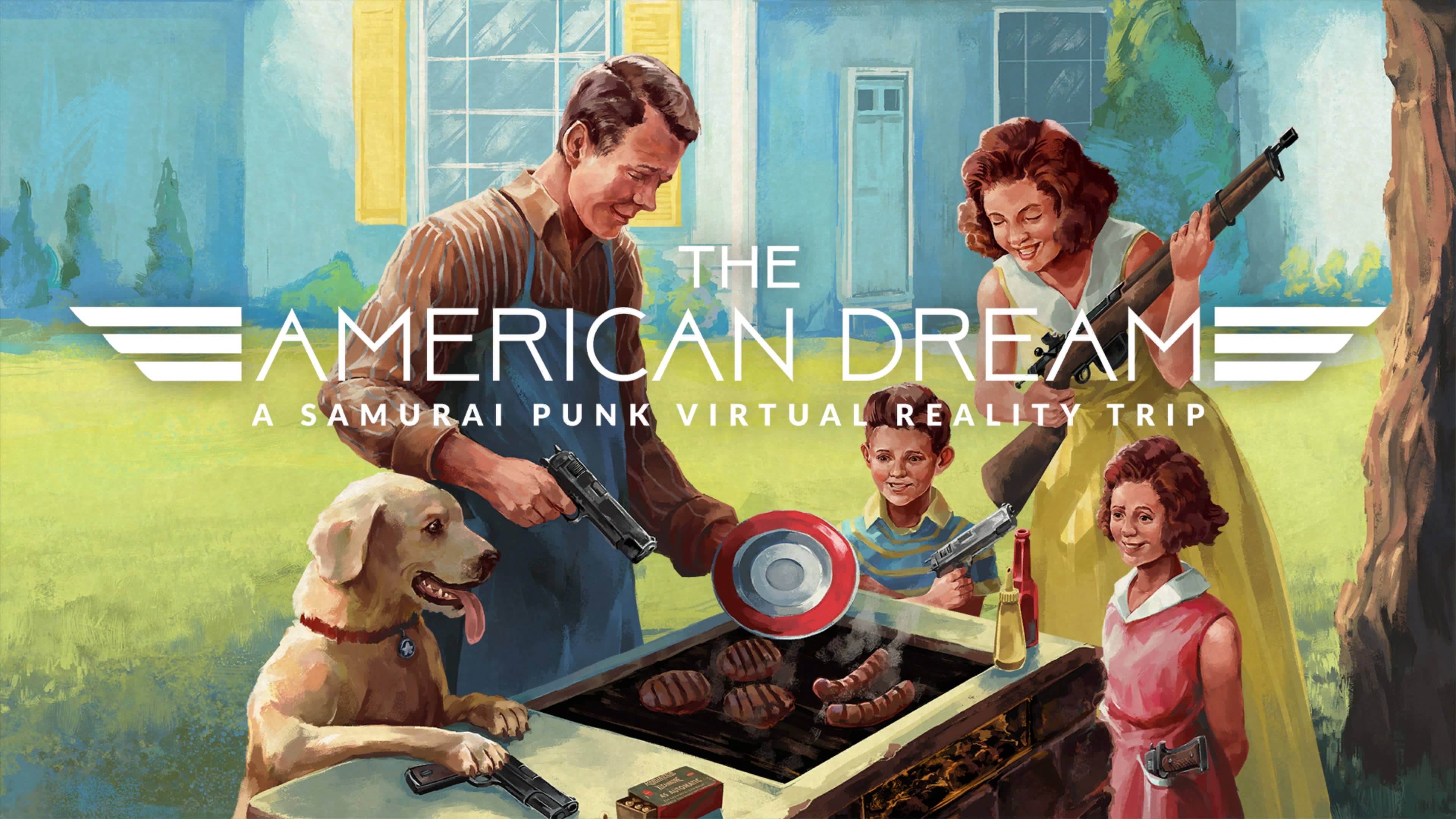 Politics in video games is nothing new. From Super Mario‘s Stalinist leanings to the environmentalist preaching of Sonic, gamers sometimes need an open mind to experience the greatest that gaming has to offer. The American Dream has a message and it isn’t shy about giving it to the player, dozens of times in many forms.

The game itself is a shooting gallery embedded in some other VR tropes. A player will wash cars, flip burgers and maintain a yard with their trusty firearms along with traditional shooting of what needs to be shot. If you are thinking that this message-consistent love of shooting as a mechanic gets boring, you would be wholly correct.

The game examines the corporatist direction that the US followed after WWII. It references the ‘nine companies’ and their backdoor dealings to deliver the post-war US economic hegemony we saw in the latter half of the 20th century. Add in the idea that fear at home could sell arms to citizens and the military-industrial complex was born. The man who coined the term, Ike Eisenhower, features in the game but I won’t spoil it for you.

The idea is that gun-ownership is not immoral but that weaving it into American identity and allowing the thinly-veiled ‘American Rifle Association’ to funnel arms manufacturers’ policies to Washington is dangerous. The American Dream also has some on-the-nose references to real-life gun-violence that when delivered in the game’s chirpy and naïve 1950s-style seem all the more horrific.

There is a touch of hyper-normalisation theory that the devs were aiming for with these references. This device works on the first couple of occasions but like a bullet of irony, it too becomes normalised when it becomes a little overused.

The message evolves a little but is really drilled into a player as the game continues. The endless stream of exaggerations and discomfortingly calm dialogue eventually just become noise.

The first half of the game is unsubtle but at least it refrains from screaming in your face. But by the end of the game, the bad guy is literally screaming the plan while looming over the player.

The obscenely-consumerist lifestyles, the plastic smiles and thin veneer of happiness are all parodied with the gentle nudging power of a sledgehammer being fired from a gun

Shooting galleries are not really a genre that everyone will enjoy for any more than a few minutes at a time. Never mind three hours straight. Nor will your average shooting gallery fan enjoy lengthy, often preachy monologues. Here lies The American Dream‘s biggest flaw – it’s boring.

As a shooting gallery, TAD is acceptable in level design, the visuals are strong and it represents a good challenge. But the genre has more excitement and far more mechanical variety elsewhere on any platform that The American Dream is likely to appear on.

Using the Move controllers for PSVR is less than ideal. The pair of mini ‘Hitachi Magic Wand’s are not reliable enough for precise shooting. When using the weaker hand to steady the rifles, it often started to spin the weapon in my hand. Firing two pistols accurately is far more difficult here than in other PSVR/Move-based shooters. Reloading is done via tossing a clip in slow-motion, the Move controllers would not play ball when using automatic weapons. I died dozens of times unnecessarily on the final boss as the dual rifles failed to take their clips.

There are other technical issues that will frustrate players. Left reload would often stop working and I would have to unload my right pistol, hit the right reload button, catch the clip with the left pistol and reload the right one again. Reloading the scene will remedy this  but a player will lose progress by doing so. When there is a lack of mechanical variety and the one core mechanic is sub-par, a game will struggle to keep players playing.

One scene in particular is beyond dark…

The American Dream begins with comedy. The obscenely-consumerist lifestyles, the plastic smiles and thin veneer of happiness are all parodied with the gentle nudging power of a sledgehammer being fired from a gun. The overtness is almost a joke in itself until it becomes predictable and, eventually, grating.

The dialogue remains well-written for the majority of the game. Even it isn’t all that funny, the Cold War references, turns-of-phrase and consistent McCarthyist tone are commendably immersive during the staged American-life part of the game.

One scene in particular is beyond dark. When the player’s own mother is shot dead and the only evidence is the murder weapon itself, the player is forced to manually check gun-ownership records instead of a searchable database to ‘prevent tyranny’. Players are offered guns to purchase easily online and with the hope of successfully cross-referencing the serial number being practically nil, encouraged to take the easy way out. This scene, while not delivered as poignantly as it could have been, was the single most well-composed strike on the absurdity of arms manufacturers’ power over public policy.

The first half of The American Dream has a lot of promise that is eventually beaten away by a blunt message and a comically-flailing rifle. The atmosphere, the visuals and even some of the more creative shooting scenarios are let down by the game’s controls and an unrelenting dedication to an admittedly noble message.

The American Dream has plenty of thought-provoking dialogue in its opening half. The better uses of the shooting mechanics also reside in the surreal mundanity of the earlier ‘How to’ guides.

Many players will find the detour from the interesting ‘life-lessons’ path to be a swift downturn in quality. Most of the game’s strong points are forgotten about – the style, the visuals, the creativity – all sacrificed for a self-aware American battle with itself. Inflicting ‘massive damage’, I am guessing, as part of a well-regulated militia.