NewsPaperGaming News, Reviews and Previews
More
Home Review Milanoir review – But I Can’t Forget About It

This games reviewer has a soft spot for a good old-fashioned mobster. The notion of 70’s gang bangers secretly running towns and cities is enthralling, with hits, becoming a made man and just being a general twat looking so entertaining.  Enter Milanoir, from developer Italo Games.

Funnily enough, Milanoir is in fact inspired by the 70’s gangster flicks of old. It’s a good job really, didn’t really know how that first couple of sentences were going to go down! Players follow a recently free made guy who is out to find whoever stitched him up and wants him dead. Which in all honesty takes a bit to whittle down given everyone in this corrupt imagining of Milan is after you. Let’s but it this way viewers, the opening scene is the players’ protagonist killing his hit man whilst cracking a rat.

This writer found a natural pattern forming during gun fights to cover, shoot and repeat. One found this methodical approach quite therapeutic and effective

Milanoir is a sometimes awkward twin stick shooter given its cursor cross hair is mapped to the right analogue stick instead of just moving the angle of the shot. This is obviously a PC port as mouse aim and shoot would be so much easier to pull off. The main issue to this mechanic is picking off multiple enemies in an enclosed area, which is often the case. Once players get their heads around the learning curve Milanoir is a fun ride, just with unnecessary hurdles. 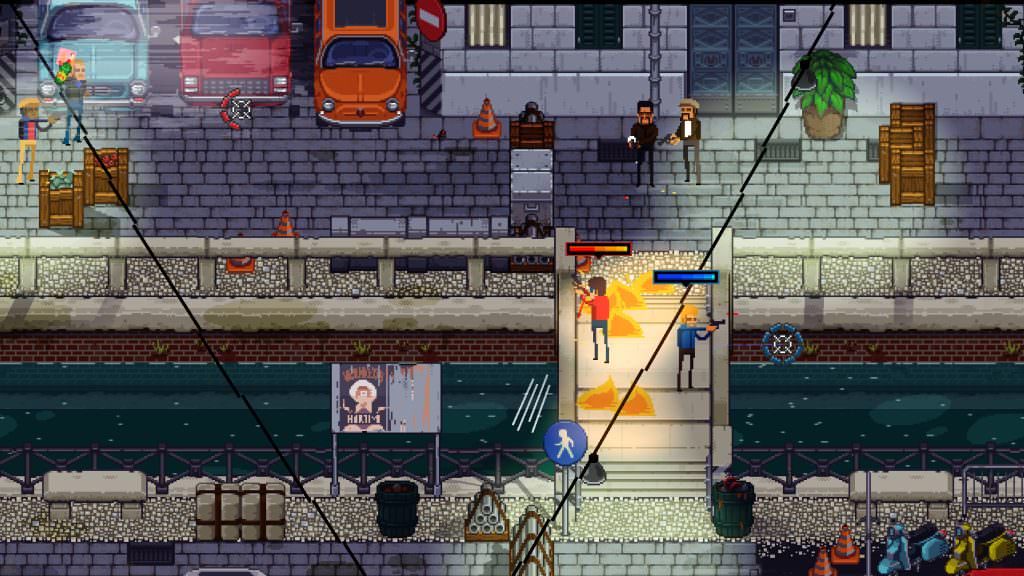 The duck, cover and dive mechanic works quite well and does buy players the time to move that f**king cursor to where it needs to be. This writer found a natural pattern forming during gun fights to cover, shoot and repeat. One found this methodical approach quite therapeutic and effective!

Who Cut the Cheese?

Whilst most games in the crime/action genre set in this time period come across as cheesy, Milanoir replicates the same grit and balls which inspired a young Tarintino way back when. Milanoir is home to a solid script that doesn’t pull back on punches. But then again, when the players protagonist is hunting down a female mob boss in a giant brothel setting, this only seems natural!

A good starting point for graphics prowess would be seeing a nude female form in pixel art for the first time. Including a well-placed pubic triangle, Milanoirs’ terrible taste is dressed up in a well detailed pixel art which is worthy of a good mention. Although one wasn’t really a fan of characters spaghetti legs, all in all it’s a beautiful presentation.

It was fun once my right thumbs figured out what the hell was going on. As well there is a 2 player local co-op option that offers your guy in a red coat a friend in the guy with the blue coat

The soundtrack is a full on 70’s good cop / bad cop funk throw down. It is such a pleasure to see smaller titles have so much thought go into a soundtrack, it adds that extra level of polish to the game and was well received. The SFX are a little tacky, but they do hold up the chip bit theme that Milanoir is rocking with a no F’s given attitude.

There is an arena mode which is just all out war, which again is quite awkward given the aiming system. It was fun once my right thumbs figured out what the hell was going on. As well there is a 2 player local co-op option that offers your guy in a red coat a friend in the guy with the blue coat. This really adds a dimension to gameplay and oozes fun. 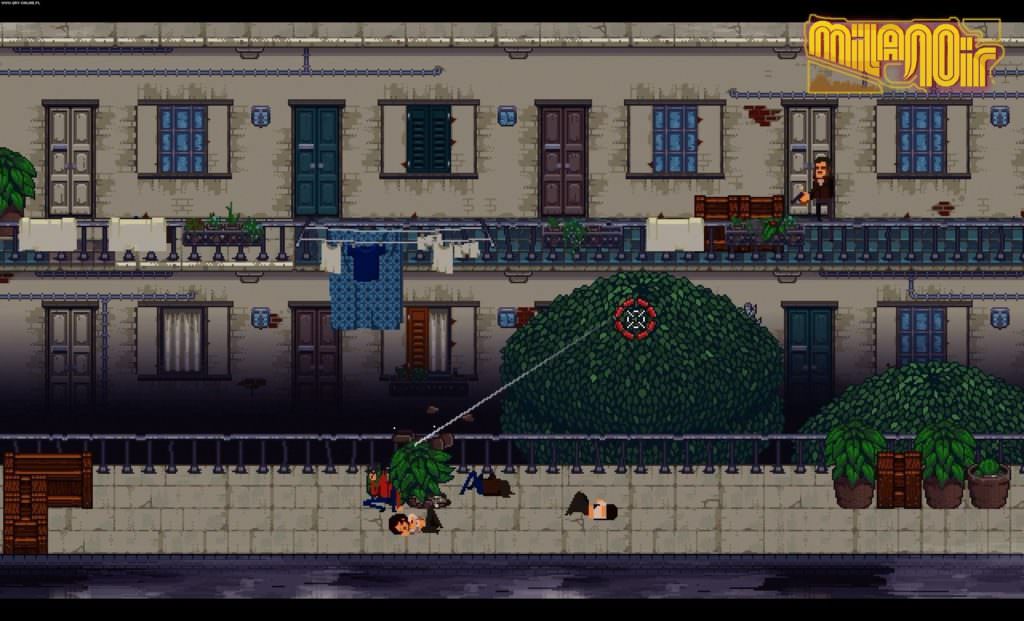 Although Milanoirs’ aiming system is a ball ache, this game is too much fun and nostalgia to miss. The script dances on the line of acceptable and blatant shock value, the pixel art is amazing and the soundtrack makes me want to start handing out offers people can’t refuse.