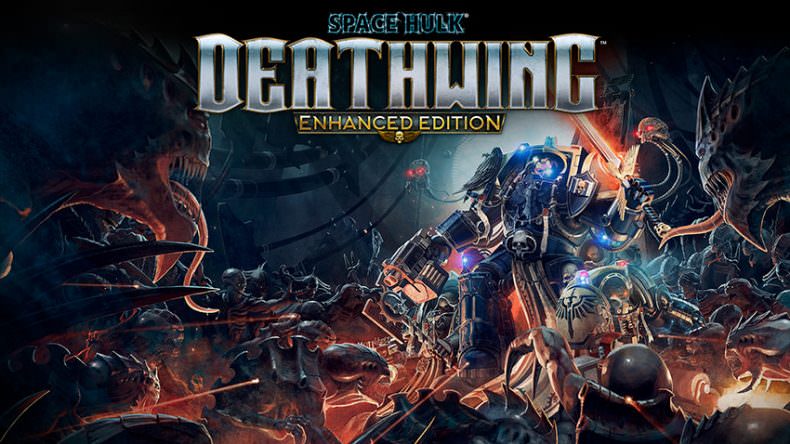 Warhammer 40K was this writers’ life as a pubescent child/teen, as standard one started with Ultra Marines. Later this shifted to Dark Angels, Tyranids then Chaos Space Marines. I was completely enthralled with the universe and lore, it was just so deep and dark. The once strong lore knowledge today eludes this table top enthusiast, but I remember one thing: Terminators were badass. Luckily, Cyanide and Focus Home Interactive decided to drop by a review copy of Space Hulk: Deathwing Enhanced edition for the PlayStation 4.

Space Hulk is such an immersive and lore-accurate game, one was quite surprised by its content. This writer almost got sent back in time to my time spent in Games Workshop playing tournaments etc. But not the smell, I’m not sure that the inside of a Terminators chaps would smell that bad.

As usual within the 40K universe, Genestealers are at it again causing mischief. The players job is to more or less butcher and mow down anything that runs, moves or even breathes in their general direction.

The title is a first person mission based shooter which takes place aboard a ‘Space Hulk’, an ancient Dark Angel super ship which is more or less a flying museum piece from way back when. As usual within the 40K universe, Genestealers are at it again causing mischief. The players job is to more or less butcher and mow down anything that runs, moves or even breathes in their general direction. Readers, that’s where the story give away ends! 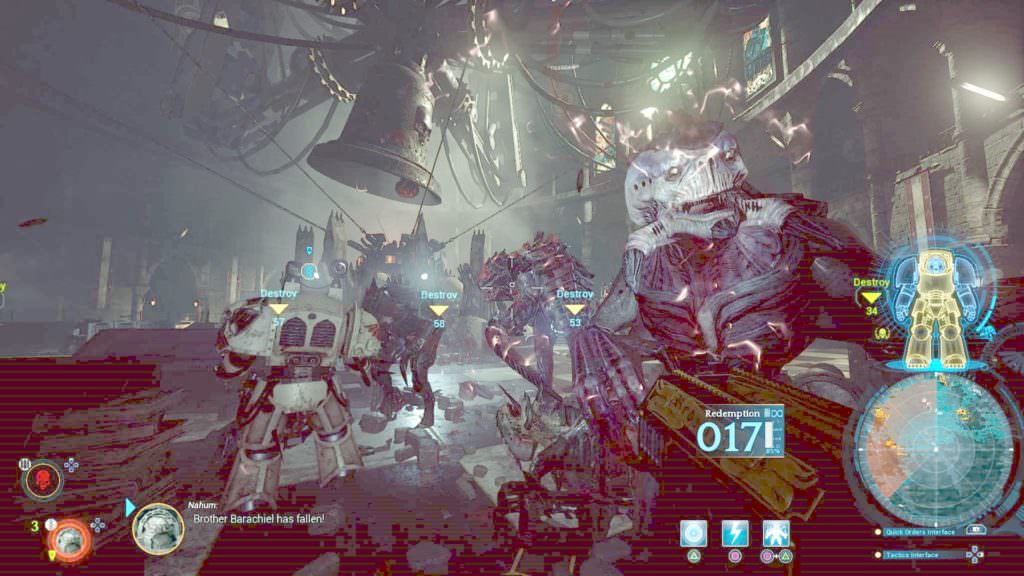 The in depth training mission at the beginning of the titles story mode give you all the tools necessary to kickass and chew bubble gum. However, it may take some time to get used to a Terminators moment speed. See, Terminators are pretty much walking tanks. Take Fallouts power armour, force feed it steroids and give it a full on red meat diet. That should do the trick! A running mechanic has been added in which is a god send when trying to cover ground.

The A.I. is pretty spot on to boot; finally, a team players can depend on.

The weapons are just as devastating as the protagonist including power swords, power fists, rail guns, plasma cannons etc. Did one mention both melee and ranged weapons are dual wielded at all times? Like this writer warned, terminators are nearly unstoppable. The players’ protagonist holds the class of Psyker, which means cool upgradable Psychic powers are at the players’ disposal. This can range from bolts of lightning, radius based attacks and more!

Our protagonist has access to Psygates also, these are safe havens run on a timed activated portal to escape the fray, heal up and equip the best weapons for the job. The number of times a player can use this ability is limited throughout every level so use wisely. Teamwork is also necessary to navigate the Space Hulk successfully, fellow Terminators can heal you, hack doors and do other useful things. The A.I. is pretty spot on to boot; finally, a team players can depend on.

There is hardly any soundtrack during Space Hulk play through, just atmospheric sounds adding to the feel of general dread whilst navigating next to pitch darkness. The one really bad point to this game is the sound effects, kicking down a door sounds like the protagonist has dropped a tin wok. Very disappointing to have in an enhanced addition of a game.

However due to the presentation of the game and a brilliant voice cast, Space Hulk can afford to dodge a bullet on the botched SFX. The aesthetic of the game is very reminiscent of the early Dead Space series, the atmosphere is constantly tense and does have some jumpy moments. This feeling is dulled a little bit however seeing as players are controlling a near impenetrable tank man!

Characters all around are very well designed and closely tied to the source material. Space Hulk‘s overall level design and amazing attention to detail and lore are commendable and make the game into a mostly well rounded package. Additions to the level such as hull walls with Dark Angel wax crests affixed for example all add up to Space Hulk unique level of immersion. 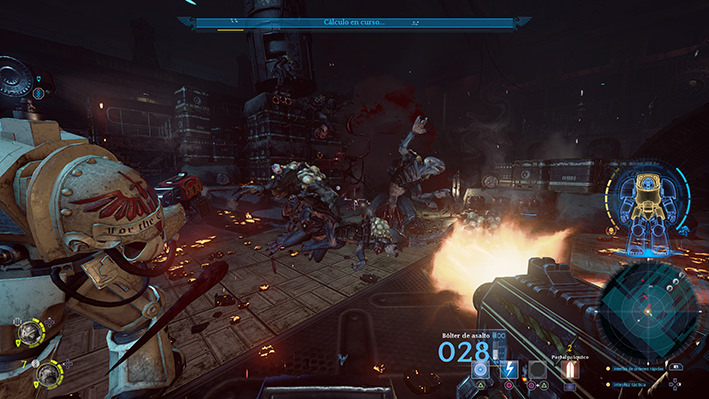 Space Hulk – Death Wing Enhanced Edition is mostly a solid Warhammer 40k experience, players just need to ignore some of the in-game sound FX. Even if players aren’t familiar to the 40K universe, Space Hulk is accessible for all FPS enthusiasts. They will just need to get used to the movement of our dear Terminator.