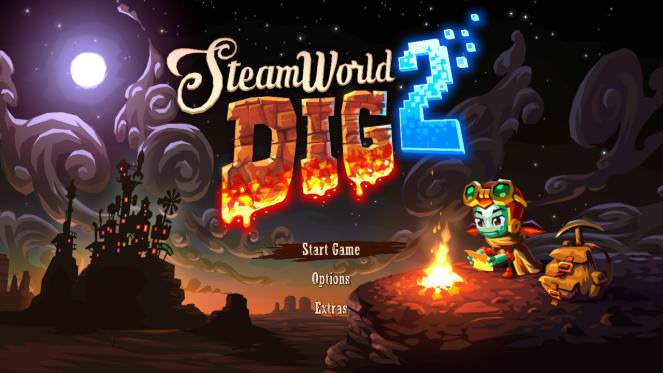 Steamworld Universe titles certainly don’t need any approval from games writer’s such as myself. Like the one cool kid in School who actually had zero f***s to give, developer Image and Form have slogged away improving its existing indie formula.

Steamworld Dig 2 picks up right where the first installment left off. This time round players get to control Dorothy, a cute little robot that the quiet nerds would make big boobie pictures off. Our protagonist is looking for Digs 1’s protagonist as it seems he’s ‘Gone to buy a bottle of milk’

The players hub town this time round is packed with interesting NPCs that help you crack on throughout Steamworld. The chats can be dry, whitty and informative all at the same time. think GlaDoS but around 80% less twisted. Oh and 100% western themed and there are no human, only robots. It bizzarly works quite well!

The main mechanic in Steamworld Dig 2 is shockingly digging, or ‘mining’. One finds called Steamworld Dig 2 a mining title a little misleading. Yes, players do mine various gems and other treasures. But it isn’t a Minecraft or Portal Knights type of game. It is literally a platforming level creator with guidance and great mechanics.

With SWG2 (Sorry, one got a bit agitated writing the game title numerous times) it’s vital that players mine with a view to actually get back out. Which, thanks to the games mechanics can be possible.

Vanilla Dorothy can jump at walls and climb them which helps massively. However, she has three different ways to upgrade herself and her gear:

– Gaining XP and levelling up to unlock upgrades, then using acquired cogs to pay to said upgrades

With the mechanics mentioned so far, one found himself grinding for better gear and taking a pickaxe to anything that moved underground. Which is also quite varied which changes up area to area. Boss fights are carefully thought out and are a delight. In a Legend of Zelda move, bosses are more of less based on the upgrade acquired nearby.

Platforming does play an active part in this title, some special areas are mostly compiled by unbreakable materials making the areas slightly ‘on the rails’. This is however a welcome break from making sure mining tunnels can be navigated to and throw.

The presentation, textures, and animations in game are finely tuned and given that bit of cell shaded polish. Animation is so smooth with a consistent frame rate. Most of the textures on both characters and environments almost look like hand drawn cut outs. The style of Steamworld Dig 2 cannot be grumbled at at all.

The Steamworld Dig 2 Soundtrack is a complete jamfest. It’s such a chilled out vibe that bleeds into the titles addictive mining, collecting and upgrading formula. It’s jam vibes can actually be seen leaking out of the speakers in a liquid aura of sorts. Will need to check the warranty on one’s Switch to be honest. SFX are also spot on and well recorded. As I always say, if you don’t notice anything then it’s done its job.

Steamworld Dig 2 ticks all the boxes for sound platformers whilst providing seasons RPG players with a rewarding grind fest. Image and Form have taken great care to make sure all features are in synergy and make a complete experience. This writer’s only complaint is that he didn’t play it sooner