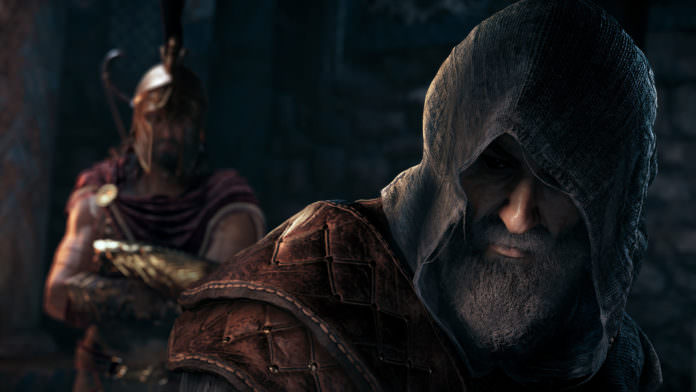 Anyone who has played Assassin’s Creed Odyssey knows that the game contains a lot of content. On top of the main story, the game also provides over 50+ hours of side missions, hidden secrets and a ton of locations to explore and thats only if you’re playing it casually. If you really want to see and do everything you could easily double the playtime. That does not stop the developers from providing even more content in the form of 2 additional DLCs. These are Legacy of the First Blade and The Fate of Atlantis.

Legacy of the First Blade is a three-part episodic story. The three episodes are Hunted, Shadow Heritage, and Bloodline. The first part of that DLC came out last month and the second part has been released last week. Because we have not done a review of the first part, we are going to merge these two parts.

In the first part of Legacy of the First we travel to Makedonia, no new region this time, and we meet Darius and his son. Whoever sees Darius and has experience with Assassin’s Creed will immediately notice a number of important aspects of the man. To begin with, he looks like a real assassin and he also has a hidden blade. Where he got that from and how important that is, we are not really told.

We get involved with Darius when we learn that we have a common enemy. After all, we are being chased by the Order of the Ancients, which of course we still know from Assassin’s Creed Origins and who makes his first appearance here.

The order has it out for us because we are a tainted one. These are the direct descendants of the Isu, the divine figures who created humanity. Why that is a problem and why the Order of the Ancients wants us to die is not immediately clear. At least, that is not immediately explained in the game. Whoever played previous games knows why the order or later the Templars have so many problems with Isus descendants.

During the main campaign you had to kill the Cult of Kosmos and in this DLC you focus on the members of the Order of the Ancients. In you learn a bit more about Darius’ past and its influence. However, it all remains rather sketchy and we feel that we are working towards a big climax in the third part.

That feeling is reinforced after the second part of this DLC. Again we are dealing with the Order of the Ancients, but this time with another branch in another region. The big enemy in this piece of story is The Tempest, which rules the seas. So expect a big naval battle, followed by another challenging boss fight. In the first part, the final boss fight is also quite spicy.

Both DLCs have a pretty thin storyline so far and we hope that this is solved in the third part. Also the length is a bit disappointing. The main story always takes about two hours, although you can spend a lot of extra time on all new side missions that are released with the DLC. We would have preferred that the story had a little more time and there was less room for side missions.

Legacy of the First Blade is a nice addition for people who can not get enough of Assassin’s Creed Odyssey, but we were still a bit hungry. The appearance of the Order of the Ancients is cool, but the story in these first two parts feels a bit too calm. Fortunately, the boss fights are a bit challenging, otherwise i wouldn’t have enjoyed it as much. Especially because the story takes only two hours each time.