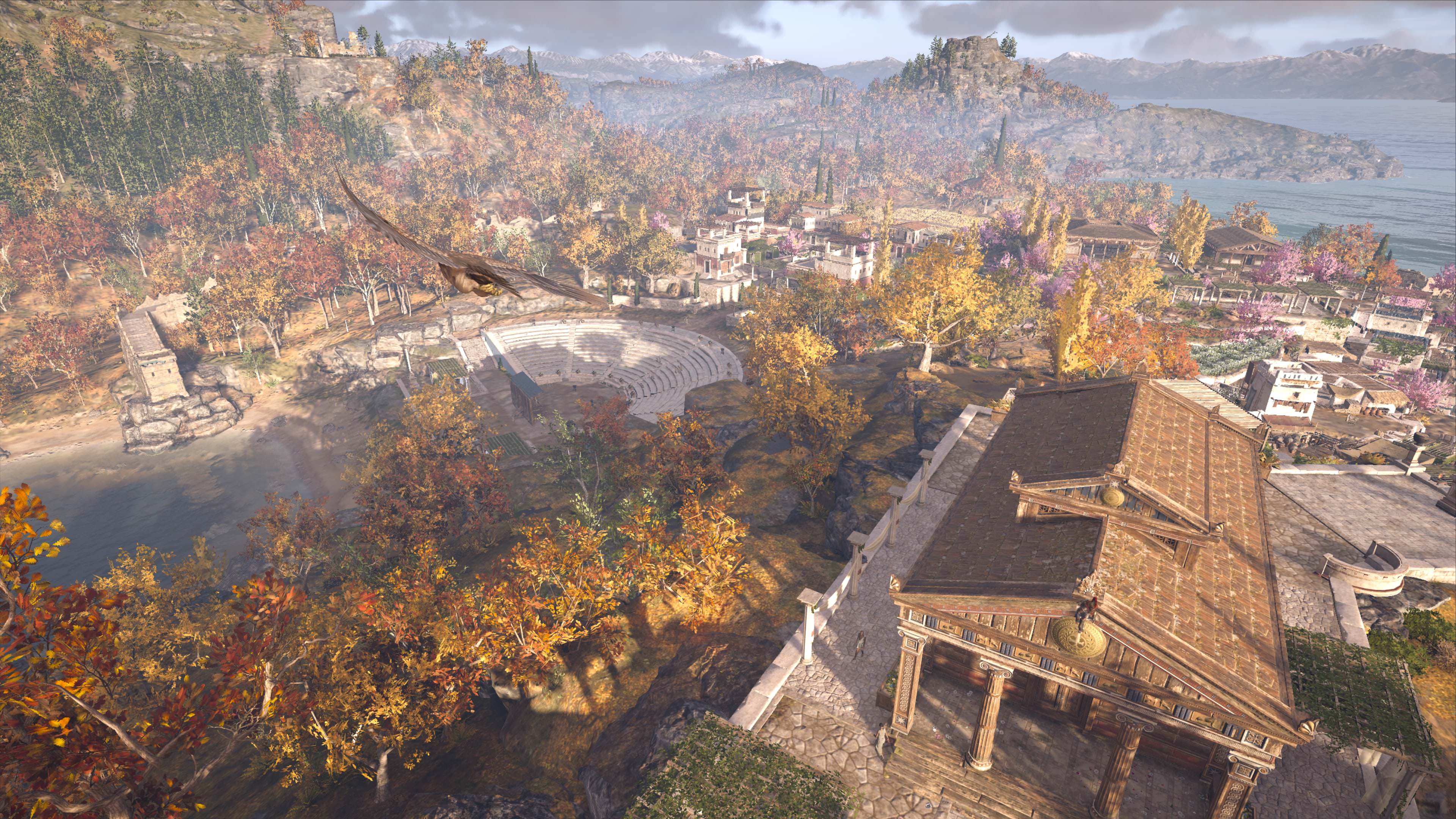 Choosing a headline was the hardest part of this review. With so many memorable moments within touching distance of a pun or a joke and I’ve probably picked the worst one. Assassin’s Creed: Odyssey deserves the best though. A confused tale of revenge, falling into something you didn’t bargain for and self-discovery, Odyssey is probably the best use of source material in the series so far along with the most evolved set of mechanics. It all adds up to another epic in the AC revival and a worthwhile hole into which you can dump your precious time.

the intrigue, the sneaki-breeki, the vistas and the sense of living in a 30-hour episode of ‘Drunk History’ as told by frog-remasculiser, Alex Jones

Anyone familiar with pop culture will instantly perk up for the intro. The game begins with Spartans taking part in the ‘Battle of the 300’. Players take charge of Leonidas and learn that his demise has caused more than Gerard Butler to have a career. The spear used by the fabled madman is a superweapon apparently but not for the reasons you think. No spoilers.

The story picks up a couple of generations later with Sparta and the the Athenians tearing strips off each other. Players choose from Alexios or Kassandra, a choice which doesn’t seem to affect the story but does place certain characters in alternate roles depending. Our hero/heroine has the typical Spartan relationship with their parents – so when dad flings us off a cliff, it’s not much of a surprise. Thanks to our tough, physical upbringing we survive the ordeal and are taken in by a friendly criminal on a remote island.

The first act is probably the strongest in the series. Our main character is the streetwise but easily amused mercenary we have seen countless times before but the supporting cast does a good job at hinting at a special future for us. With Ancient Greek culture obsessed with the idea of seeing the future, the use of foreshadowing is appropriate and well-executed.

Our role as a mercenary thrust into his/her destiny by fate (or wicked design [no spoilers]) is played well. At no point did this writer feel like a pawn or a parkouring macguffin – something that Assassin’s Creed games have been guilty of before.

Sailing and naval combat aren’t a central thread of the plot like in the other Assassin’s Creed games where it appears. Boat-lyfe is more of a means to explore with the option of reasonably deep battles to get into if one so chooses.

A Trip to Athens

The ‘southern Greece + islands’ map is incredible. The work done to create parching Mediterranean lighting in AC: Origins has been built upon. The rich forests, plains and urban areas teem with life and detail but the game isn’t afraid to let a player loose in areas of empty space. The devs made tough decision pay off in this respect – condense the desert/sea areas to avoid complaints of ’emptiness’ or use these expanses effectively.

The empty wildernesses dotted around the mainland and sometimes the smaller islands makes the packed streets and busy harbours of Athens seem all the more noisy. Sailing and naval combat aren’t a central thread of the plot like in the other Assassin’s Creed games where it appears. Boat-Lyfe is more of a means to explore with the option of reasonably deep battles to get into if one so chooses.

The trip around Greek antiquity is enhanced by a less brave decision. Players are given the choice of a traditional AC experience when it comes to markers and pathfinding. Or something the devs call ‘Exploration Mode’, which is fancy-talk for fewer markers. Instead, players will be given a set of clues with which to mark the map themselves. This means a little more attention paid to the worthy map and less blinkered point-to-point parkour. While giving players the choice is the best of both worlds, it saddens me to think that someone might pick ‘Traditional’ by accident or through lack of adventuring spirit.

The feeling of a set of nations at war is palpable. Outside of towns and cities, there are grim reminders everywhere. The set-dressing of charred remains and ripe corpses is a frequent reminder of how war is zero craic. But it’s also the basis of a conquest thread which is conversely, an abundance of entertainment.

The new parkour, sneak and combat mechanics that were introduced in Origins don’t get much of an overhaul with the exception of skill wheel combos. Players are still given a minimal visual cue when a parriable heavy attack is incoming but they will mostly be dodging. Hit’n’run attacks work best as being surrounded is a death sentence. AC:O and AC: Odyssey force a player to be subtle and if not, you had better be skilled.

There are periods when flailing with short attacks after a Spartan Kick will be the only combo a player will perform but the game does ramp up the difficulty and introduces some inventive ways of forcing a strategy change in the mid-game.

Controlling the Adrestia at sea will be familiar experience for those returning after AC III or Rogue. The control scheme didn’t need any changes since the combat is much the same bar some obvious technological retreat. Players can buff their craft in the traditional way – dumping resources into weapon upgrades, rower stamina/speed or armour. They can also knock people out and recruit them – luckily anybody in any uniform is a capable seafarer specialising in the narrow needs of our improvised navy.

Aforementioned ‘conquests’ give some order to slaying of everything in uniform that the mid-game of all Assassin’s Creeds becomes. The hierarchy of militaries and the logistical support needed means that players have natural targets in the slightly-ancillary war.

one will frequently be covered in fresh Athenian blood and eating thei stolen, wheaty snacks as they roll up to an Athenian general to help in a battle they caused

By accident or design, a player can mostly stay out of a few parts of the game. While the war is set up as a huge facet of the story in Odyssey – it’s more of a series of repetitive set-pieces earned through shadowy slaying and stealing. The battles are induced by murdering leaders in a given nation or stealing the ruling army’s Farley’s Rusks.

It doesn’t matter who is ruling there or who you choose to fight for in the battle – which is really odd. Players will be a one-man plague to Athenians on one island, Spartans on the next – then they choose who to help in their respective battle with the more difficult choice yielding better gear as reward.

As a result, one will frequently be covered in fresh Athenian blood and eating their delicious stolen, wheaty snacks as they roll up to an Athenian general to help in a battle they caused.

The cherry on this half-baked plot-cake is that an evil guy funnelling weapons to both sides and playing them off each other for his own gain is treated with special contempt.

A player can get a sense of just how far-reaching the conspiracy is as they unveil each actor in the plot – Athenian, Spartan, rich or poor, anybody could be pulling the strings

While the illusion of choice is common is action games, Assassin’s Creed: Odyssey does make some effort to offer players alternate routes. Even if the ultimate end remains, it’s still nice when a battle is avoided or a quest shortened by exploring dialogue or asking around. The consequence system is a bit lost in the haze of inconsequential choices – I never really knew if I had specifically caused something or just chosen some dialogue.

As Odyssey opens up fully about a third of the way in, a shadowy group of Mason-esque killers and corruptors is introduced fully. Our hero/heroine has a quick run-in and revelation with the umbrose cabal and discovering exactly what this treacherous cult is up to becomes a central tenet of the plot.

Working one’s way through the ranks is an interesting and enjoyable experience. Each one is unmasked by a set of clues. Clues which are found through exploration, combat and other clues. Yes, there are sets of clues to find the clues and yes, that is funny. But it’s also a perfect way to lift the veil on an organisation at the heart of everything. How the cult are composed of a mix of historical figures, myths and legends and the manner in which you discover and dispatch them all is presented and played perfectly. A player can get a sense of just how far-reaching the conspiracy is as they unveil each actor in the plot – Athenian, Spartan, rich or poor, anybody could be pulling the strings.

Players can finesse their way through many missions but the mercenary system, arena and boss battle set-pieces (no spoilers) will absolutely drag a player back to a more violent era

Gift from the Gods

Just like in Origins, the blurred margin between history and myth that the passing of millenia creates is used to great effect. The addition of the brutal but admittedly standalone battles fully exploit the game’s combat mechanics move the game further from its roots. Players can finesse their way through many missions but the mercenary system, arena and boss battle-style set-pieces (no spoilers) will absolutely drag a player back to a more violent era.

What’s more impressive is that what remains from the original series and makes the series recognisable has been preserved and mostly enhanced – the intrigue, the sneaki-breeki, the vistas and the sense of living in a 30-hour episode of ‘Drunk History’ as told by frog-remasculiser, Alex Jones.