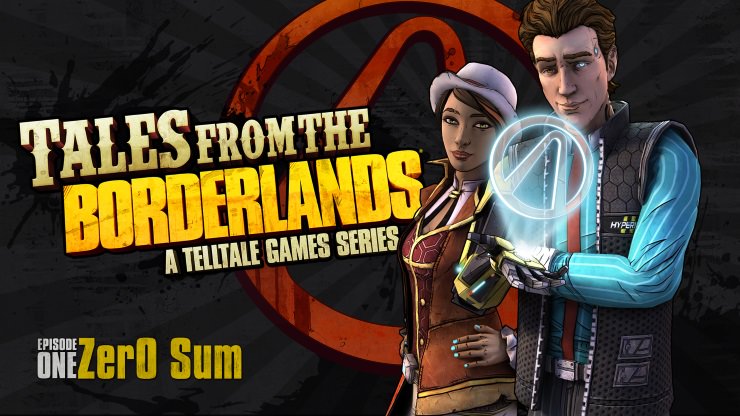 So I actually have very little to give out about this time. Yay for you guys and your …..eyes? So the only two little things I am going to mention is the fact that the chapter was too short and there wasn’t a lot of progression story-wise. Now in saying this it’s a catch-22 because the first chapter did have to set the tone and get us used  to all the characters. It also had to show us the basic storyline and set it all up. So therefore my complaint is a very minimal one as I can completely understand why this chapter needed to be set out in the way it was. Although a little longer would have been nice. 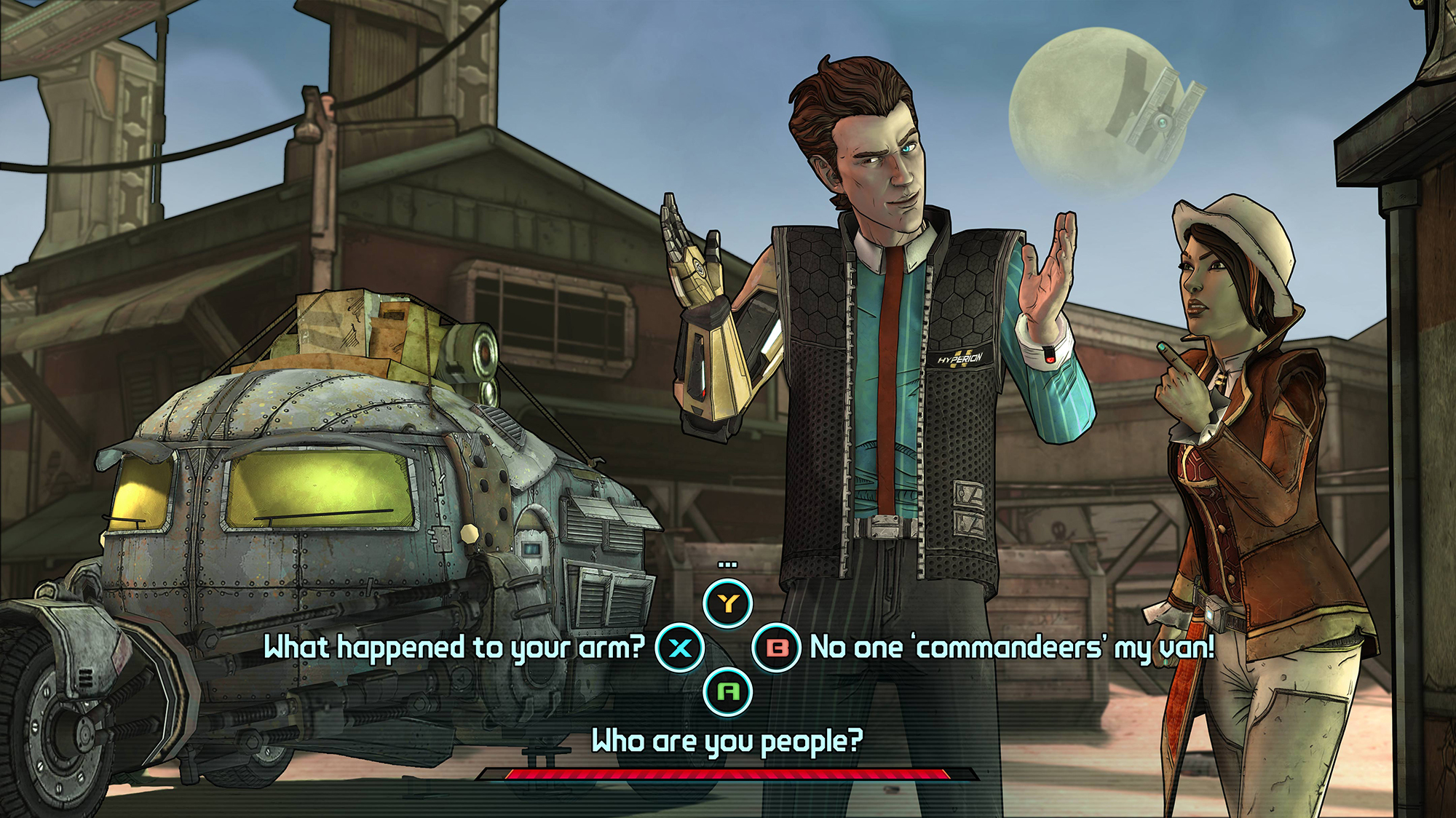 So on to the many great and wonderful things about this game. Firstly it is extremely obvious from the second the game starts up that TellTale Games teamed up with 2K games and worked extremely closely on this game. From the load up screens to the start-up screen and even the story intro it all has 2K and Borderlands written all over it. The graphics for both companies games are the same cartoon/real rendered look and this made the game feel like it belonged to both. By this I mean if you compare both The Walking Dead and Borderlands together graphic wise, they are practically the same. One of my favourite things about Borderlands is the comedy and attitude and TellTale hit this nail right on the head and continued the famously known attitude of Borderlands. I really wouldn’t be surprised if the same writers were involved.

The characters are also very likeable, especially the main character Rhys. He is comical, kind and yet very oddly bad-ass! His nemesis Vasquez is also a nasty piece of work and after meeting him for only 3 minutes you already despise him and want to make him suffer. This feeds greatly into the fact that you are now playing on the Hyperion side. Usually you would want to choose the nicer options but because of him you really want to step it up a notch 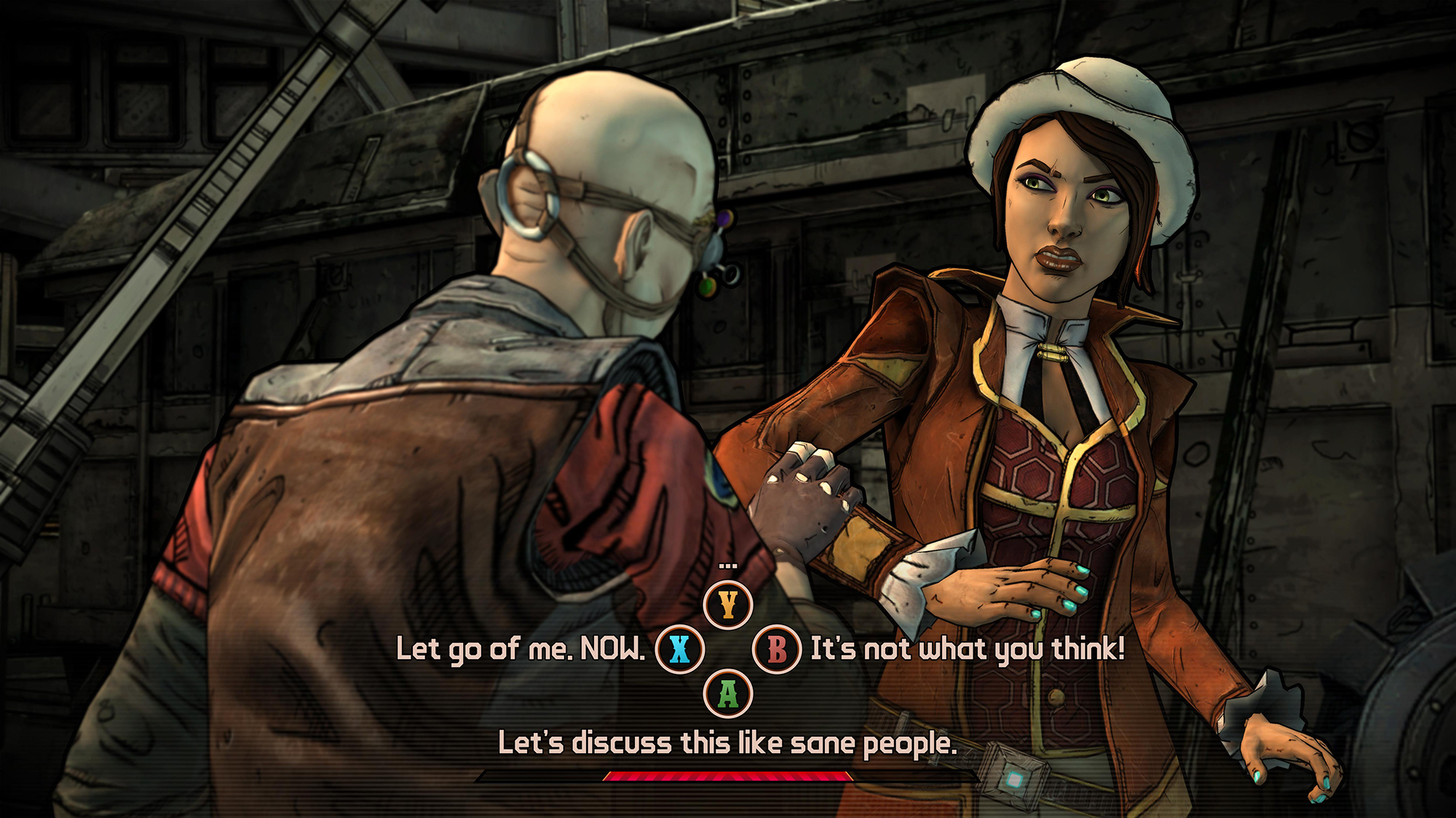 and become a true Hyperion and reek havoc. The chemistry between you and your nemesis is so intense and irritating it really plays out well for the storyline.

Finally the best part for me was the fact that you are part-robot, part-human. You have a cool robotic eye that can scan the area around you and helps you gain bonuses to the storyline or helps you out with the storyline. You also have a robotic arm that really comes in great use. You can scan and decrypt secret messages from computers and so on. Then finally you have the ability to summon Loaderbot. Loaderbot is brilliant you can upgrade his weapons and armor and you can control him and kill off all the bandits around you with grenades, rocket launchers or machine guns. You also have the option of self destruct if you are really stuck in a jam. Did I mention this is all done from a hologram interface that comes out of your palm!!

So I think its pretty easy to guess what my conclusion on this game is, so I ain’t going to bore you to death with explaining the score below because it pretty much speaks for itself.