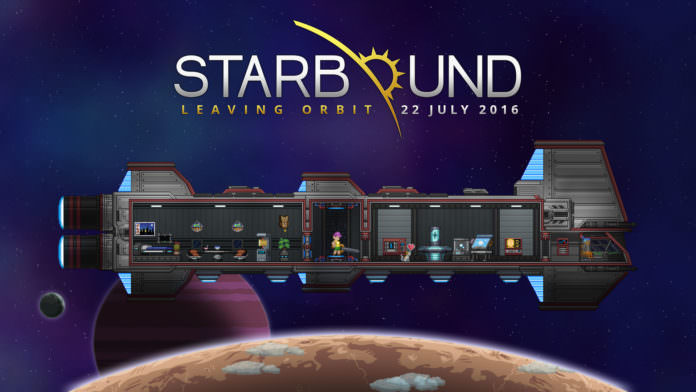 Do you want to explore the outer reaches of the cosmos? The universe is a big place. Starbound makes it a lot smaller, more accessible for the casual space explorer. Travel from planet to planet, solar system to solar system mining, questing and combating.

In a procedurally-generated world, a unique universe is laid out for each player to traverse, a seemingly limitless multitude of stars that’s easy to get lost in. Depending on the race you choose for your character, you are given a ship and an origin, be it an interstellar steam train and an invaded homeworld, or a mobile castle and exile from your people. There’s a bit of lore in the game’s universe to delve into, but the history of Starbound’s inhabitants is too sparse to be immersive. This isn’t necessarily a bad thing, as the game’s humour and breaking of the fourth-wall doesn’t seem to count much on submersion.

Fun and relaxing (when not fighting the enemies that one encounters every few steps), Starbound does appear to be “Terraria in space,” as many people have said. Following the craze of Minecraft and similar building-based games, it’s not to be blamed. Trends are made to be built upon. Tunnelling into the cores of alien worlds so that you can progress further in the opposite direction is an interesting and welcome addition to the legacy of Minecraft. It’s easy to get lost in the mindless monotony of digging for ores, and soothing as those who enjoy such games can attest to. (Especially when it’s raining in-game.)

Questing is something relatively new to the game with recent updates, adding a fresh perspective to progression. Previously it was up to the player to guide oneself, merely upgrading to get to the next area, and again, and again. It can seem aimless, but again, that’s an aspect of these games that can be freeing. You can just settle down on some backwater planet and raise a farm, if you want. Similarly, multiplayer is a nice way to add a new dimension, another layer of fun.

The 2-D graphics suit the game well, and the pixellated art-style is one of the game’s most attractive features. As said earlier, the game doesn’t take itself very seriously. It’s all about fun. The customisation is huge. In the character creation screen, it’s race, colours and features, but with some progression, the scope of clothing, armour and weaponry opens up wide. Then there are spaceship pets, planets to bookmark as home, houses to build and much more. One gripe is the size of your ship, and not being able to alter your ship’s features (in the latest update).

Although this is a game in development, and Steam may have jumped the gun by quite a bit, with it available as early as Christmas 2013, and no full release in sight. Early access can be a great way for players to see a game’s progress, but when save games are wiped every few months (as was the case earlier in Starbound’s development), the full price of the game doesn’t seem quite worth it. This is where the community comes into its own, with the modding members of Starbound’s player-base embraced by the developer’s, even giving them a place to congregate on the site of Chucklefish’s forums. Mods are always a nice way to improve and alter the individual experience, but when it gives the players only what the developers cannot or will not add to the game, it says a lot about the game as a whole.