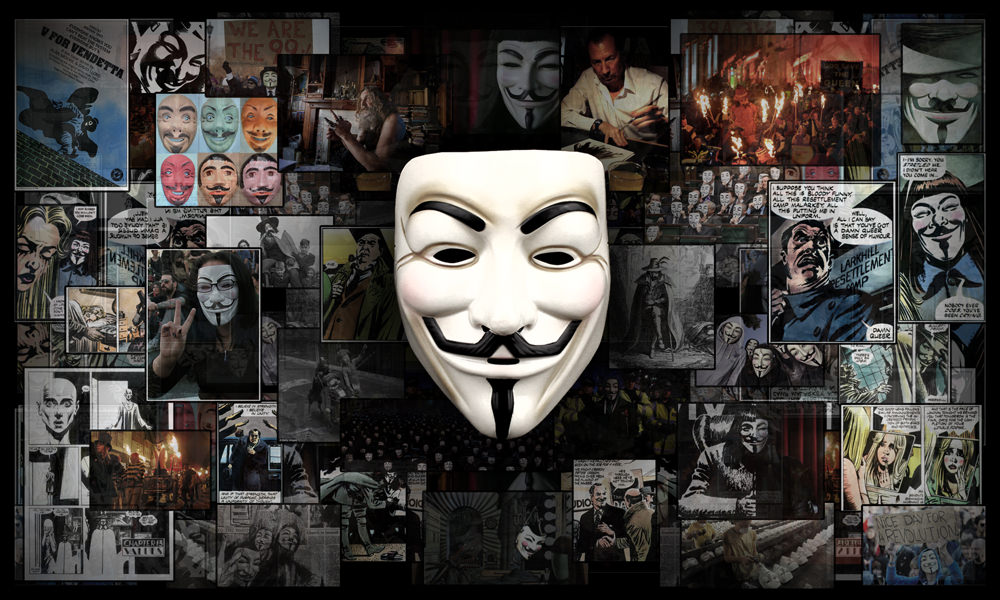 I can think of no other symbol more important to 21st century counter-culture than this smiling mask.

Created by writer Alan Moore and artist David Lloyd, V For Vendetta and it’s titular masked anarchist were to have a life far beyond the 1980s comic series or it’s 2006 film adaptation. A story of a Guy Fawkes-styled terrorist fighting back against a fascist British government, it was a love-letter to anarchy in the face of colossal opposition that has resonated with protesters and internet activists…or trolls, depending on your opinion.

And opinions do vary. From relatively small-scale protests such as 2008’s Project Chanology (Anonymous’ attempt to disrupt the Church of Scientology), to the global Occupy movement, the motives of the people behind the masks have been criticised and lampooned, along with their determination to their ideals, as much as it has been embraced by those actually wearing them. Regardless of opinion, the V mask has undeniably characterised protests big and small, offline or online across the globe. 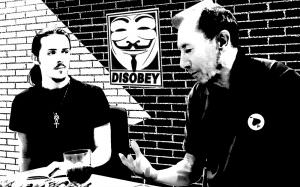 At this year’s Dublin Comic Con I got the chance to chat to David Lloyd as he signed comics and promoted his new online comic platform Aces Weekly. I couldn’t resist the opportunity to ask the creator of the (in)famous mask himself about what the it originally meant to him and what he thought of my generation’s use of it.

As the convention was closing, we talked about what the mask represented to him. When I likened it to the Che Guevara graphic you find on posters and shirts everywhere, he had this to say.

David: What most people [who wear the t-shirt] don’t realise is that Guevara was a Marxist. He had his own ideals, whereas I devised V as representing pure anarchy. There was no real political philosophy behind him, so you can make up your own mind on your ideal, but the meaning of the mask itself doesn’t change. 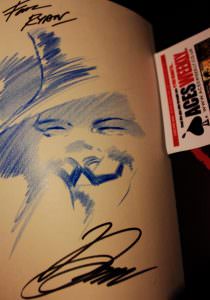 second life, you know, sprung from fiction into fact.

It really represents a kind of returned optimism. The smile that appears on the mask is actually a kind of accident. When we originally created the series I actually wanted to use a Guy Fawkes mask that was sold in the stores round about November the fifth. But I couldn’t find one so I had to imagine the mask myself.

The mask that I remembered had a moustache and it suggested a smile to me. It’s become fortuitous because part of the concept behind the mask is somebody who is trying to start a revolution against incredible odds, so he’s smiling against adversity in one sense. Also, because he’s suffered terrible hardship and loss, he’s smiling instead of crying. He believes he can do what he set out to do.

So it’s become a symbol that represents the movement- it represents a great deal of hope, and hope for fulfilment of ambition.

The contrast between optimism and oppression, and of the individual against the many is something found in the very artstyle of the comic. On the surface, V for Vendetta may look like a pulp noir adventure complete with heavy shadows, corrupt cops, and a dystopic Nineteen Eighty-Four urban sprawl, were CCTV surveillance watches every move. But while the film’s depiction of the fascist government is on-the-nose, the comic’s treatment of these “villains” is much more nuanced and grey.

You can really understand why they would agree to a fascist system and why they would go along with it out of fear or carelessness or convenience. It’s easier to follow the crowd rather than follow your own beliefs. Leader of the fascist party, Adam Susan, is portrayed as a lonely, loveless man with something of a fetish for “Fate”, the surveillance network that oversees Britain. A network that V hacks and uses against him. He grips a nation’s throat because he has no grip over his own life. Rather than blindly hating him, it’s easy to pity him.

Likewise, the more pedestrian characters such as Detective Finch, Gordon Deitrich and Evey Hammond are all (initially) complicit with the present order for reasons ranging from comfort, weariness or fear. Few characters are outright detestable, even the violent ones.

V himself is no hero. He is a cold-blooded killer embracive of violence and terrorism and his level of sanity is as big of a mystery as his true identity. All that is known about his past is that he was once experimented on in a prison camp, turning him into the smiling subversive that he is. The morality of what he does, or of what the fascist government does, is not lightly judged, and no viewpoint is shoved down the reader’s neck.

In a comic that is visually comprised of blacks and whites but narratively comprised of greys, the reader is invited to formulate their own opinions. Which, fittingly, is V’s anarchist ideal; individuality and self-determinism. However…

Ryan: Some people are concerned that the mask has become something of a club itself. That it’s a way for people to let off steam without really committing to their ideal. Whereas V or the comic itself is very much about pure anarchy and trying to give that message that you should be in charge of your life rather than being a member of some sort of group.

Do you ever have concerns that what that mask means to people of my generation has been warped or changed?

David: Well I- the whole concept of anarchy and whether 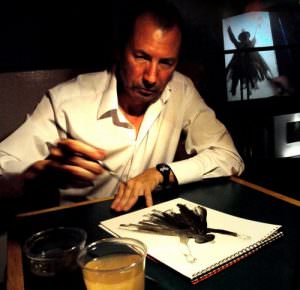 you should be led or whether you’ve got be a complete individualist- that’s a very deep question. For me, you only succeed as a group. You only have any chance of succeeding in anything as a group. And the idea of that mask unifying people is a great thing.

That viewpoint about the mask being a kind of escape valve to just express themselves without actually doing anything- I mean I understand that but I don’t see the real point behind it because anybody who actually goes out to protest is taking effective action at the beginning.

How effective they are, all depends on circumstances and how much weight is against them, and how much the opposition on what they want to achieve is. I don’t think the mask in itself- I think it’s great to adopt a symbol of unity, and it’s important.

There are no movements in the history of man that have succeeded without them becoming unified, and strong by their unity. So I just don’t see the point with what you’re saying; that unification is not powerful and will lead to a dissipation of opposition. It has to lead to a reinforcement of opposition. It has to. It has in the past and I don’t see reason why it shouldn’t in the future.

The problem is is the way that- the world now- the corporations are doing everything they possibly can to separate individuals. They don’t want people united in any way at all by their interests. They just want them to be helpless, “fat and happy”, being fed selfish, indulgent desires. That’s basically what the corporations want of everyone, and that’s the way the world is going. So unifying people into some kind of protest is good.

In both the comic and the film, the V mask smiled back at and laughed in the face of a clear, visible fascist enemy. Now that it’s made a transition onto the internet and into the streets, it smiles back at less visible enemies, be they corrupt economists or internet censors. Like V the character, the people behind the mask today hack and use the internet to organise, undermine or simply have a laugh.

David Lloyd has been using the internet too, to circumvent printing and traditional publishing. His site, Aces Weekly, is an online outlet for some top-notch comics from around the world. People who stopped by at Dublin Comic Con (myself included) were lucky enough to get an entire volume for free, but the price is a steal as it is. There is no corporation to go through to support these comic artists.

They too provide their service with a smile.