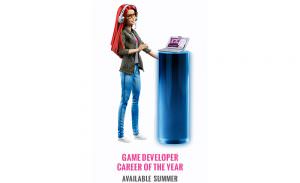 In a stand against gender roles and stereotyping, it has been revealed that a game developer Barbie will hit the shelves this summer. This year’s “Career of the Year” model, follows on from 2015’s Film Director Barbie. The doll is designed to get girls interested in becoming game developers.

Both the gaming and film industry are known to be dominated by men. According to an IGDA study women only make up 22 percent of the industry workforce. However,  the percentage of female game developers has doubled since 2009, Meanwhile in Hollywood, the glass ceiling is just as prevalent. A recent study in The New York Times found that women made up just 9 percent of the directors of Hollywood’s 250 biggest domestic movies in 2015.

The Game Developer Barbie is set to join a number of other less stereotypical and more realistic models. Mattel have also announced the release of three new Barbie bodytypes: curvy, tall, and petite. Game Developer Barbie sports bright red hair, a pair of glasses, a headset with a microphone, a laptop computer and casual gaming attire.

“Barbie reflects the world girls see around them. Her ability to evolve and grow with the times, while staying true to her spirit, is central to why Barbie is the number one fashion doll in the world,” Mattel chief operating officer Richard Dickson said in a statement.