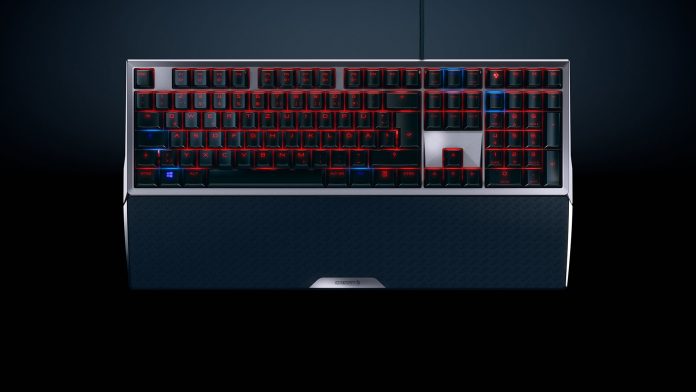 Cherry is known as the manufacturer of the most widely used mechanical keyboard switch in today’s keyboards such as the Corsair, but they also manufacture their own keyboards as well. Today I will be looking at the Cherry MX Board 6.0, a simple keyboard packed with powerful features with the aim to address the issues with reduced latency.

The box includes the Cherry MX Board 6.0 itself, the palm rest, a soft fabric cover and the quick-start guide. The cover doesn’t look like it might do much in way of protection but it’s nice to have and will at least keep the board from gathering dust when not in use.

While carefully opening the packaging, (or ripping it to shreds if your someone like me), you’ll see a sticker telling you to download the latest firmware upgrade for the Cherry MX Board 6.0 from the manufacturer site www.cherry.de. The keyboard had version 4.0.242 installed and the firmware update brought it to version 6.0.0.

The large palm rest has a soft rubber surface with “MX” repeating diagonally. It’s really comfortable, even after extended hours at your machine. The downside is that it attracts dust extremely fast and is difficult to remove from the embossed lettering. It has a metallic attachment to hold it to the board which is easy to add and remove.

The body is made out of aluminium and was cold to the touch, I found this interesting as it goes against the usual plastic build. It is also coated with a grease-resistant finish which is definitely one of the important features of this keyboard. It is barely heavier than other keyboards in the market at 1.6kg while the likes of the Razer BlackWidow Chroma is 1.5kg even with the aluminium housing.

he cable is sleeveless and (contrary to the first appearance) not removable. It’s 2m in length and the USB plug is gold-plated (but this only has optical effects).

On the underside of the keyboard (made of plastic) you can find the signature plate covering a screw, (and thus is probably a guarantee seal), and a cable duct with three ways to lay the cable, left, right and centre.

The two positioning feet fold up laterally which is unusual but fulfils its purpose perfectly. They are also fitted with anti-slip rubber linings which ensure the board stays where it should.

The Fn, Scroll-Lock,  Capslock and Numlock keys all change to blue when activated. The brightness can be controlled in 1% (F5 and F6) and 10% (F7 / F8) increments. Unfortunately, only the red lighting is influenced by the brightness control, this didn’t change in the firmware upgrade to version 6.0.0.

The 3mm led is on the upper half under the keycap so the switch itself blocks the light to the special characters on the lower half of the keycap making them very hard to read unless you’re in a dim-lit room.

The technology, which has been christened by Cherry “RealKey” (or RK for short) is intended to reduce the input data massively. The manufacturer advertises this with phrases like “Faster than anything else”.

Conventional mechanical keys rely on digital readout technology, which leads to reaction times of 20ms due to calculations in the controller. With Cherry’s RealKey technology, different voltages are applied to different conductor tracks so that the controller can almost directly recognise which button has been pressed and thus the circuit is closed. The reaction time falls on 1 ms.