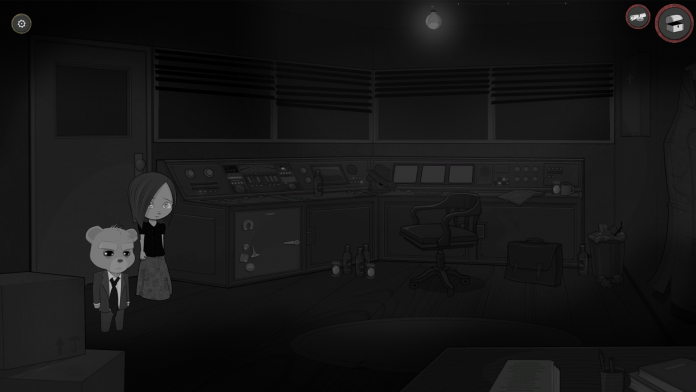 Bear with Me, from Croatian based developer Exordium Games is a beautifully crafted noir adventure game with a few shortcomings, its main problem being that the adventure is a little too short for now.

The story begins with our 10-year-old protagonist Amber being awoken from a Nightmare, her brother Flint has vanished and there’s an arsonist causing trouble in Paper City. Suspicion for the trouble falls on a mysterious individual called The Red Man. Amber ends up joining forces with Ted E Bear, an apparently retired detective who happens to have an office in Amber’s wardrobe. 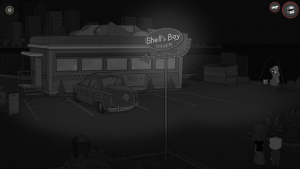 The story plays out against a 2D gray scale Noir aesthetic. The character animation is sufficient to bring the games varied toy characters to life. The characters do fit into well-trodden Noir tropes of detective, gangsters, henchmen, corrupt officials, etc, but what makes them interesting is the fact that they are toys. Ted E Bear is obviously a teddy bear while one of the game’s baddies is a great white shark called The Reef King. The Mayor of Paper City is a slightly Orwellian looking pig.

The only splash of color comes when the aforementioned Red Man makes an appearance. Strange to be referencing a film of such serious as Schindler’s list while writing a review of an adventure game with a walking/talking bear, but this was the visual cue that my memory latched onto upon seeing the bright red of this boogie man’s cloak set against the grey scale mise en scene of this game. Cinematic references aside, the developers have managed to craft an imaginative adventure game world populated with Amber’s Toys as living characters. 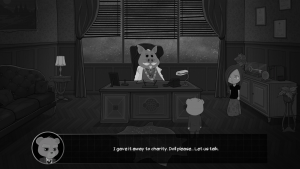 The mostly static 2D backgrounds have some simple animations that give them some life. Rain hammers down constantly outside the windows of Amber’s house and occasional lightning strikes brighten up rooms. The world map becomes accessible in episode two and this gives an overview of Paper city, area’s of interest are outlined in red. If an area has been a victim of the ongoing arson attacks a little-animated smoke will rise from that location on the map. I found these little touches of detail to give the game more depth beyond its initially basic feel. 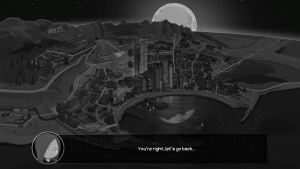 Another way in which the developers used ‘basic’ means is with the cut scenes, rather cleverly they have employed the use of comic strip images rather than animated cut scenes. These work very well in conjunction with well-acted voice over to stitch together the chapters of the game’s narrative. My only quibble with these would be one in which a 4th wall joke totally suspended my disbelief.

The game’s sound design is up to the task and adds more depth to this 2D world. The soundtrack is well made and brings the Noir inspired world to life. Sound effects work well when various objects are interacted with or when a puzzle is solved opening a door or revealing an important object.

I found the puzzles to be of a medium difficulty for the most part, as with all point & click adventure games, it’s always best to scan every room and check every item. Key items (No pun intended) can easily be missed as well as witty dialogue if a player is lax with their mouse clicks.

As with many previous point & click adventure games, a ubiquitous magnifying glass symbol and/or hand symbol will appear over objects at each location. If you pick up something it can either be broken down into its component parts using Ambers trusty Swiss army knife or combined with another item to form tools and other things. This aspect of the game leads to lots of trial and error but also makes it pretty clear when you’re obviously missing a key item to aid your progression.

Engaging the games varied characters in conversation is also paramount to progression. These conversations can be humorous but sometimes a cliched script can make them a bit boring. The voice acting in bear with me is good. The main characters are well acted and this adds to the game’s atmosphere. Ted E Bear sounds like a hard boiled detective while the Reef King has a gravelly voice which one would expect a Noir gangster to have. The character designs are imaginative for the fact that they are based on a young girl’s Toys. 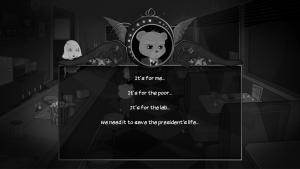 The humorous dialogue that’s revealed as you click on mundane lamps & boxes makes this aspect of gameplay less taxing. There are references to classic video games strewn throughout the game which can only be enjoyed by detailed exploration of each area’s environment. One particular joke in reference to a Fantasy book titled ‘half life 3’ made me laugh out loud.  There are also jokes which break the 4th wall, and consequently broke this player’s suspension of disbelief. I didn’t like being reminded that I was playing a video game while trying to enjoy said video game.

However these aside the writing is for the most part decent, while there’s nothing new in its subject matter, the world in which it takes place makes it feel somewhat fresh. The story held onto my interest even if it didn’t trod on any new ground and left me eager to play the next episode.