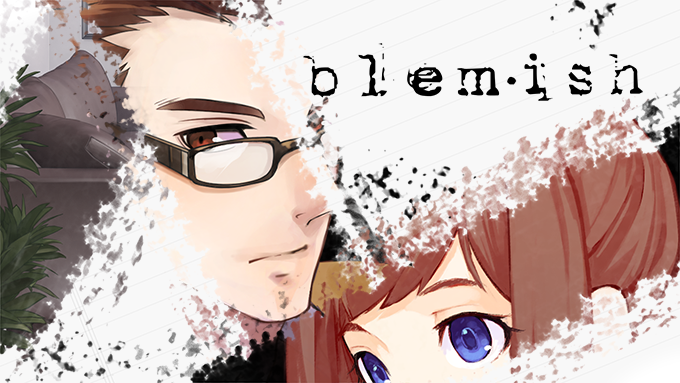 After recent memories of train wrecks like Mighty No.9, I–like many gamers–tend to be a bit wary of Kickstarter games. What it’s important for us to remember though, is that for every Mighty No. 9 there’s a Shovel Knight or a Hyper Light Drifter. Despite the stigma fan-funded games have, many people tend to forget that fan-funding has also provided some of the best indie games in recent years to gamers. It’s fine to be wary, but as gamers, it’s important for us to recognize when we do see a project that genuinely interests us and looks promising. Enter Blemish, an indie visual novel about a therapist who needs to learn how to take his own advice.

A psychological drama visual novel about a family therapist suffering emotional turbulence after a young patient commits suicide, reads Blemish’s Kickstarter page. Being launched by Pavior Games, Blemish is perhaps the most interesting concept for a visual novel–English or otherwise–that I’ve read about in a while. Between an interesting concept, fantastic art, the polish of the trailer, a very promising and solid demo, its creative breaking of so many typical visual novel tropes (EX: The main character isn’t a high school student looking for love, he’s a married man in his 30’s), and the fact that it appears as though this game has been being worked on for a few years and just needs funding to push it through its last mile whilst getting it out in a timely manner, it’s hard to not be interested in Blemish.

I became so interested in Blemish, in fact, that I reached out to Morris of Pavior Games to talk to him about Blemish, its inspiration, and the vast amount of love he’s poured into it the last few years that makes you can’t help but want to see this project get funded.

EG: Let’s begin at the beginning! Tell us about yourself!

PG: Hey! My name is Morris of Pavior Games, creative writer and avid player of story-driven video games. Almost in my 30s, on the internet way too much, and an okay guy! I’m from the States and hoping one day I can find an adventure outside of the country! I’m a big fan of visual novels obviously, but I love JRPGs, too. My favorite franchises being Persona, Final Fantasy, and Kingdom Hearts. I like to read, write, social media, online gaming, and cheering people on!

I played Ace Attorney: Phoenix Wright to see what all the hype was about, and I got my answer served on a silver platter. Prior to that, I was really big on JRPGs, so I didn’t know how I’d receive a story-driven game without combat. However, the game constantly had me on my toes; something a combat-based game wouldn’t do for me personally. I really enjoyed the riveting mystery the game delivered, and since then, I’ve been on the look out for visual novels with suspenseful story-telling.

Got any favorite visual novels?

My absolute favorite has gotta be the Zero Escape series. I don’t think I’ve ever experienced a story that completely shattered my brain gameplay-wise AND story-wise. It’s one of those games where you feel like you got it all figured out, until you’re hit with a plot twist in the shape of a mason brick. If we’re talking more on the conventional side, I would say Saya no Uta was pretty compelling for me. Disturbing in nature, yes, and I don’t think there’s any game LIKE it, but that’s what makes it stand out.

That leads us to your current project, Blemish. How’d you get the idea for it?

I remember thinking of making a visual novel where the main protagonist was in his early 30s and married. In most visual novels, male protagonists are typically younger and looking for romance. I wanted to try something uncommon, where the MC is already in a marriage, but he is dealing with the botherations that may come with it as well as his career. The irony makes fun story-telling, in which the character’s occupation deals with helping people with issues he may have himself. Blemish tells more than just someone dealing with their emotions, but the repercussions of them feeling that certain way. Blemish will definitely feature several surprises, because “OMG factors” are what I enjoy and would love to deliver myself.

Give us the elevator pitch for the story of Blemish.

Blemish tells the tale of Tobias, a family therapist, suffering guilt after his previous client is found dead after a suicide. He continues his work with his next patient, but is cautious and insecure of his association. Redeemingly, Tobias discerns strange behavior and recollections from this new patient. Aside from this, he trudges through a marriage gone shaky. He tries to use his own tips, but realizes it isn’t easy.

What do you think is the most interesting thing about Blemish?

Its story touches on the behavior of individuals experiencing not only emotional turbulence, but mental problems as well. You can say I hope to express the connection between mental health and emotional health in allegory form.

You got a really interesting cast of characters–got a favorite?

There’s more to see, but my favorite one to write is the MC’s wife, Henrietta. It may not seem like it, but she will provide a bit of comic relief to the story. She’s a trying wife and wants Tobias to be well, but things had been so peachy for quite awhile, so she isn’t really sure how to deal with his distress. Aside from that, Henrietta is eager to keep at it, even when she’s bad at lightening the mood. She can also be a bit of a crazy coupon lady, and Tobias dreads it on shopping day…

Blemish focuses on psychology–do you have a background in psychology? What got you so interested in it?

Personally, I have zero background in psychology other than my casual research on it. It’s a topic few creative writers seem to touch, but it makes up everything our characters do and how they see things. Writing a story that delves into the “why” as opposed to the “what” regarding a character’s frame of mind makes better fiction, at least, in my own opinion.

How long have you been working on Blemish?

For two years. A game in Blemish’s smaller scope probably should not have taken longer than that, but a lot of it was paying outsourcers on my own out of pocket for high quality work. With the success of crowdfunding, I can finally go full force into development.

Why make Blemish a visual novel?

It’s a medium that allows me to focus on story-telling with eye candy and the pleasure of music. A book cannot do these things, and gaining exposure is even more difficulty with only text. I think many people enjoy visual novels for those reasons. The interactivity is a plus.

Development will commence its slower crawl, and given the amount of investment that was made, I have no intent on leaving it all to dust. Needless to say, Blemish will eventually be complete, but the “when” is indefinite.

According to Kickstarter, this is the first game you’ve worked on and you’re doing it largely by yourself–is there any particular reason why?

Over the years, I’ve picked up various skills out of boredom: graphic design, creative writing, and music composition. It was during the point in my life where I wasn’t really sure what I wanted to do. When I decided to develop Blemish, artwork was a priority, which is something I was never able to master. The artwork for Blemish takes the most out of my funds, so in order to save money, I had decided to utilize those skills instead of spending on even more freelance work. I intend to continue that plan even if Blemish is funded on Kickstarter; alluring artwork is the biggest concern I have, so my desire is to use as much of the funds as possible (aside from rewards and fees) to be used for the visuals.

What’s been the biggest challenge working on Blemish?

As mentioned previous, achieving high-quality, consistent visuals for the game.

If it gets successfully funded, d’you have any idea when it might be released? Even a year?
Six months after receive funds is a safe estimate, but you never truly know. If things take longer than that, I’ll be sure to communicate things to all supporters.

Tobias Gamble is a family therapist whom various married couples recommend in the small city of Flanston. He’s praised for his familiar way of association and candidly speaking on his own experiences as a married individual. Having little doubt in his career, Tobias yields a proud and charismatic nature, at least until after he associates with his first adolescent patient. Zoe Matthews, the patient in question, is found dead in her bedroom after committing suicide. It isn’t long before the event becomes gossip throughout the city, and Tobias’ composure is left shattered. Wallowing in guilt, he trudges along to his next patient, another young girl by the name of “Millicent.” Tobias commences the assessment disheartened and distrustful of his ability, and he’ll soon find there’s little rest to be had. There’s something about Millicent, and it may be deeper than he can intake. — via Blemish’s Kickstarter.

A demo of Blemish is available for free download here.