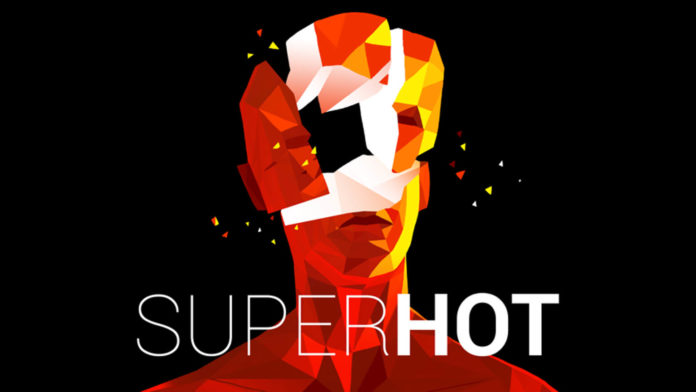 Immersive, addictive and extremely frustrating, SUPERHOT is a first person shooter like no other. With its unique ability to suspend time until you choose to move,  it turns what should be fast paced violent encounters into tense quasi-turn-based scenarios. SUPERHOT will have you on the edge of your seat as you dodge bullets, jump over enemies and  throw weapons at your attackers to gain a little more time to finish them off.

SUPERHOT’S storyline is lacking, it must be said. You are dragged into a shady situation where your friend has downloaded some sort of file which ends up being a game. Interestingly enough, you get absorbed into said game and must face challenges put forward to you in order to survive long enough to escape.

Each level’s scenario doesn’t seem to mesh well together and it seems a bit all over the place. It feels a little too random as it jumps from one scene to the next. One minute you are in a bar trying to defeat a group of enemies with guns and the next you are jumping over a car.

Graphics wise, the game suits the crisp white starkness of the levels against the bright red of the enemies. It isn’t hard to miss what you are meant to do in each level due to every weapon being black and every enemy being red. The simplicity of the graphics adds a mysterious undertone to the game while the levels take on an almost dream-like quality. The game looks damn good once those enemies start coming towards you.

The Deadly Ballet of SUPERHOT

The most unique and tantalising aspect of SUPERHOT is that when you move, so do your enemies. This enables you to form a plan of action and gingerly take out enemy by enemy until you have finished the level. Because time only moves when you do, the line of a stray bullet coming towards you in slow motion is something to behold. The speed dynamic looks great. The graphics have a fresh, vibrant feeling that coupled with the game dynamics, sets off the game beautifully.

The gameplay itself is easy enough to master. Your main objectives throughout the levels are to disarm your foes and kill them. What I liked about defeating the enemy was the way they shattered on impact. I found that it was a smooth transition from moving slowly towards and enemy and speeding up your attack. The feeling of having superhuman powers as you plunge from a balcony onto a bunch of unaware enemies is uplifting. The adrenaline starts pumping and before you know it you’ve taken everyone out and get to hear the victorious chant of SUPERHOT until you skip to the next level.

SUPERHOT wants you playing on a high, so once you have finished a level you get to see your actual gameplay in a speed that makes you look like James Bond having consumed one too many energy drinks taking out a whole load of bad guys. It’s super cool.

If that doesn’t sound amazing, then how about weapons that shatter on impact against enemies? Even the deaths are full of style and flare that make you look forward to killing anything that stands in your way.

Once Is Probably Enough, Thanks

While it is an enjoyable game on the first playthrough, it doesn’t have the longevity that other first person shooters might. Once you have finished the game there isn’t much more to do except play through some extra modes. It’s not a game that you would go back to frequently.  It also gets slightly repetitive having to play through a level continuously after dying at the same spot ten times in a row. If and when you overcome that small hurdle it has to be said, the feeling of accomplishment is euphoric.

SUPERHOT is a game that is worth playing. It’s fast, crazy and I really enjoyed playing it. It is worth getting, especially if you like playing games that are a little different to the more mainstream games on the market.