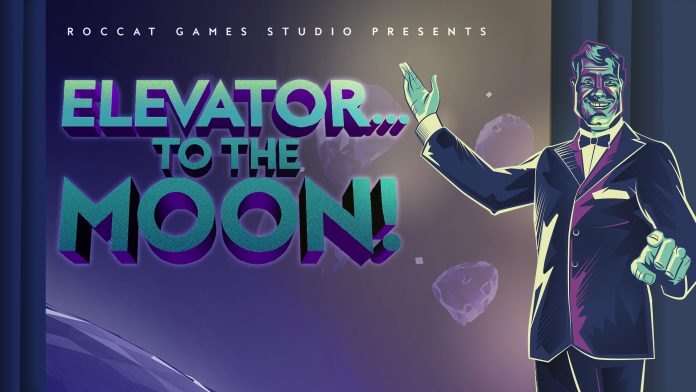 ROCCAT is best known as a German manufacturer of gaming peripherals. For the past few years, they have supplied the market with mice, keyboards and headsets all geared towards gamers. They even have their own software to further enhance the capabilities of each product such as the ROCCAT Swarm and Power Grid. We have covered their products in the past, the ROCCAT Skeltr and the ROCCAT Sova being personal favourites of mine. This year ROCCAT have unveiled a new game that they are developing called Elevator… To The MOON!

Elevator… to the moon! is the second game title from ROCCAT Games Studios in Hamburg. Earlier this year ROCCAT announced Sick City, a Real-Time Tactical Combat game. Elevator… to the moon!, which releases on Oculus and Gear VR in October of this year, may seem an ambitious step for ROCCAT but after getting hands-on with both titles it’s clear that they know what they are doing.

We originally went to the ROCCAT booth to check out their new product lineup, after which we got hands-on with both Sick City and Elevator… to the moon! The Game Producer Marc Barnes brought us into an adjoining room and introduces the game as a “VR Adventure Puzzle game”. I let Thomas, who has never used VR before, take the lead. I was expecting him to spend most of the demo time fumbling with the touch controls while he got to grips with the VR element. I would then proceed to mock him over a few cold glasses of Kölch that evening. Alas, within moments he was at ease with everything and so the demo began.

The game itself has a myriad of different VR elements that make up the story as a whole. I have seen many games try to add as much interactivity and “VR” space as they can cram into their game. This never works out well as it overcomplicates everything far more than it should. Elevator… to the moon! takes this same approach but each element perfectly compliments the other, they all work together to provide a fun and interactive experience for the gamer.

The backstory is quite good, it’s filled with tons of wit and humour with enough sarcasm to alleviate any work-related stress entirely. The president of the world, Doug-Slater Roccmeier, is forcing the nameless protagonist to build an elevator to the moon. The demo begins quite a ways in, the elevator is high enough to see most of the earth’s surface. While building the elevator, things will keep breaking and you will need to repair them. There are loads of things that can happen from spontaneous fires, to panels falling off the wall or even hidden bombs planted by the AI nemesis.

The AI in the story is quite brilliant, the idea is that he is constantly trying to sabotage the elevator but he’s not very good at doing so. As Mark stated, “he’s quite possibly the worst AI in the world”. The AI is also extremely sarcastic which brings a lot of humour into the game, especially during frustrating puzzles.

All the way through the game, Roccmeier will bark orders through the elevators intercom. It’s up to you whether you want to do what he says or ignore him. Thomas decided to play it safe and go along with the directions he was given. First, there was a fire, which meant he had to find an axe to break the glass and take out the fire extinguisher. This happened pretty close to the start so it took him a little longer than usual to figure everything out and quench the fire.

There are several steps to each task and not all of them can be completed the same way. About 10 minutes in Thomas was right at home with the game and was making his way through the level with ease. There were several occasions where something would be needed and it would be up above his head or below his field of view and it would take him a few minutes to come across it. This is typical of VR as most gamers think in a 2d plane where you have front, back, left and right. While there are games that make use of vertical space, VR can take this and bring it further than most non-VR games ever could.

The mechanics of the game are very user-friendly and welcoming to VR newbies and fanatics alike. The core mechanics are typical of VR but it’s obvious the thought process behind the game has been moulded and reshaped many times. As I mentioned earlier, Elevator… To The Moon! takes an abundance of VR mechanics and pieces them together perfectly. The approach to a VR game has to be different and Elevator… To The Moon! brings VR into an entirely different dimension. Where most VR titles are focusing on jump scares and wider visuals, Elevator steps into a realm of its own providing a brand new kind of experience for gamers to enjoy. 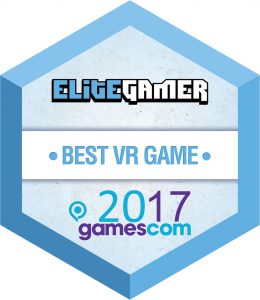 Out of all the great VR titles, we tried at Gamescom, Elevator… To The Moon! was the one that left us most excited. It opened up a whole new way of experiencing VR. It also gave Thomas the hunger to try more VR titles. While discussing the nominations for this years “Best VR Game” it was obvious that Elevator… To The Moon! would take home the prize. It has all the ingredients of a great game as well as a passionate development team behind it.

As ROCCAT Game Studios second title and their first VR title, Elevator… To The Moon! marks the start of a long and successful gaming lineup. Want to see more from ROCCAT? Check out or coverage of their new line of mice and keyboards as well as our hands-on impression of Sick City, a Real-Time Tactical Combat game that promises hours of enjoyment.