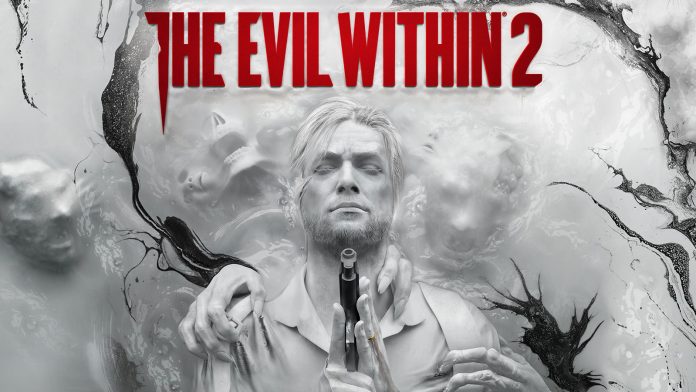 In 2014 Shinji Mikami, the great man of the survival horror genre and the first Resident Evil games came back to the roots of horror games for Bethesda and created The Evil Within. The game managed to impress very well, but certainly had room for improvement. With The Evil Within 2, Shinji Mikami has taken on an advisory role, so the question is if the sequel is a success or a failure?

In The Evil Within 2, you play as Sebastian Castellanos, who also played the lead in the first game. In the original Evil Within, Castellanos is caught in an alternative reality called Beacon. This reality was created and led by the consciousness of psychopath Ruvik. His captivity in this so-called nightmare-like STEM world has clearly taken its toll because, at the beginning of the second game, Castellanos is a broken man. After the nightmares of the original, he also has to deal with the guilt surrounding the death of his daughter. At the start of the game, however, you come into contact with Juli Kidman (also a familiar character) who tells you that your daughter Lili is still alive.

Juli claims that she was kidnapped in Sebastian’s house a few years ago (instead of being burned alive) and is being used by the mysterious organization Mobius as a catalyst for an alternative world. Throughout the world, Mobius tries to exert his power on the world. Unfortunately for them, the world appears to be overrun and Sebastian is instructed to find and save his daughter. Something that’s easier said than done, as the world is populated by monsters and zombie-like creatures. 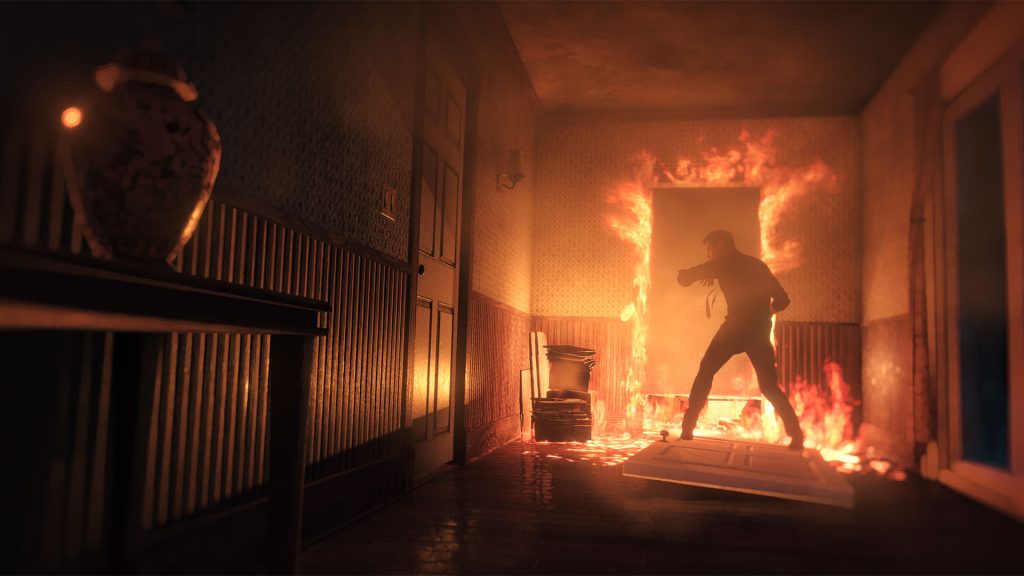 The Evil Within 2 deals with a lot in the Story

The storyline is great and the developers know how to make it credible and interesting at the same time. It begins with the opening scene in which Sebastian enters his burning house in his dream to save his daughter. This gives you a clear goal in the game. In addition, you’ll find fragments of Mobius soldiers and find out what they thought when they entered the world of The Evil Within 2 and what choices they made. It gives a nice foundation to the game, which is really very good.

The “world” of Evil Within 2 is Union and is a creepy mindf*ck because there is no logical or illogical in this world. Everything can change somewhere else on the spot. This is done very fast and means that you must always stay alert. If you walk through a door and then try to go back, the previous area may have disappeared or been replaced with something else. The laws of reality do not exist in Union, which gives the developers a lot to play with creatively.

According to Sebastian, Union is designed to resemble “any town USA”, consciously chosen to give the visitor a sense of reality. Nevertheless, Union is unstable and it breaks down into total destruction. When you walk through Union, you feel a steady earthquake several times, giving you the idea that you are in a kind of reality that will soon no longer exist. 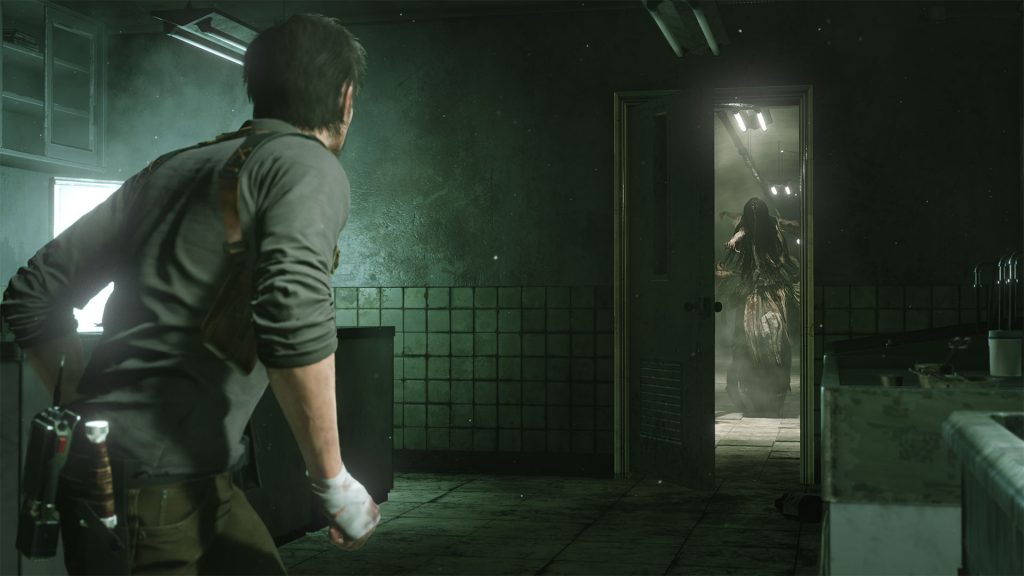 A non-linear approach that adds to the suspense

The thing about The Evil Within 2 (and Union) is that it’s no longer a linear game. Although it’s not really a big open world, you certainly have more freedom when it comes to exploring. The first game was a purely linear game, but with the sequel, you can choose what you want to do. So there are side missions that are definitely worth the effort. Here you will find more ammunition and weapons as well as background stories of STEM and experiences of previous visitors. If you do not do the side missions, you still get a good 13 hours of gameplay. With side missions, you can ramp that up a few more hours.

Another reason for doing these side missions is to collect green gel. You can inject this into your brain to improve your skills, Bethesdas creepy inclusion of the skill tree. Sebastian is an ex-police officer who turned to alcohol to forget about his trauma and guilt. To get back in shape he needs this green gel. This gives him stamina, health and non-vibrant hands. For anyone (like me) who likes to focus on the horror element without dying every few minutes, the side missions give that additional edge needed to complete the game.

If this would hinder your experience and you chose Nightmare Difficulty (“Ahem” Mark Petson) then, by all means, go all in. Full disclosure, when I picked up the game where we left on in our live stream with AllCast Irish Gamers, I had to restart because I was out of bullets and running through a horde of zombies is no easy task in Nightmare mode.

During the side missions, the enemies are still deadly but not as challenging as the main missions. For example, there are a lot of zombies that you can easily turn off by shooting their heads or using stealth. In the main story, you have to deal with the most horrible creatures. It is here that you will experience real frightening moments.

The boss battles can be quite frustrating because you often have no idea what exactly you need to do. At one point you fight a boss with multiple heads and chainsaws and no indication exactly where to shoot. This leads to wasting a lot of bullets which can lead to a quick game over.

The Evil Within 2 plays and feels largely good. Weapons shoot well, but only after you have most upgraded. This is also true for stealth because Sebastian in stealth is slower than the zombies, which often results in an annoying death because you are seen at the last moment. Stealth kills are satisfying, even starting out. When you sneak up to your prey, Sebastian automatically pulls out his knife. The attention to detail is why I love this game so much.

Crafting is a very important aspect in this game, often you will find crafting tables where you can upgrade your weapons and make ammunition. You can also craft ammunition in the field but it requires twice as many materials which are hard enough to come by as it is. Because of this, you should make the best use of any crafting tables you find and if you need an upgrade or component, go on a quick scavenge and come back. It’s always wise to prepare yourself well at a table before dealing with the various challenges of this STEM world. 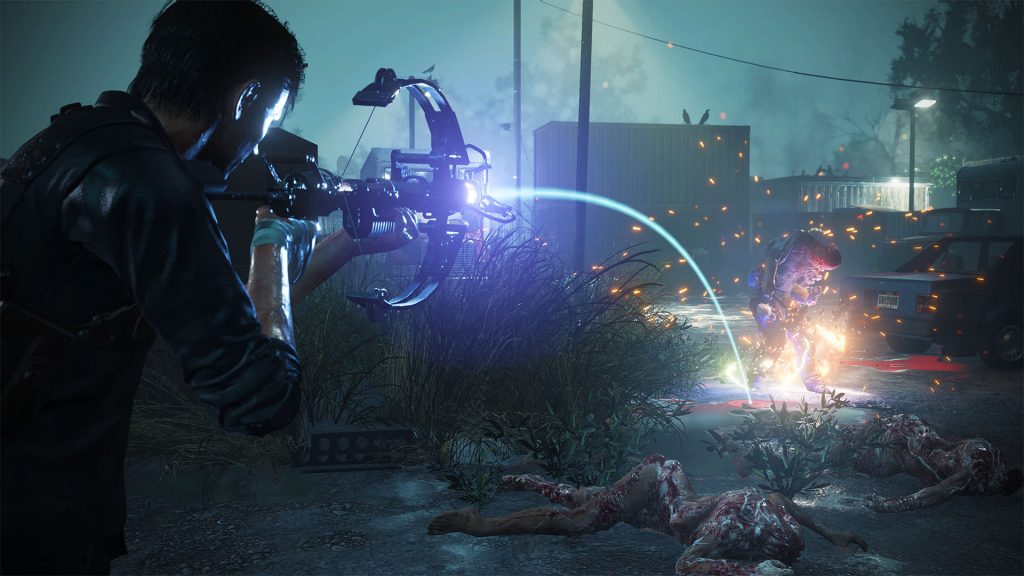 Compared to the previous game, The Evil Within 2 looks miles better. areas are not as bare as before. The game also has a better aspect ratio than the first game that had black bars for a cinematic effect. The graphics are good but it’s never amazing. This game must really have the effects, creepy atmosphere and animations. Areas may change, these are the moments that you are sitting as a player at the point of your seat.

The areas are nowhere near as bare as before and everything looks sharper and cleaner. The game also has a better aspect ratio than the first game and no longer has black bars for cinematic effect. The graphics are good on medium but it’s never amazing. For the full effect, you would need to play it on Ultra. This game makes great use of effects, creepy atmosphere and animations. Areas that continuously change, these are the moments that you are sitting at the edge of your seat.

Horror fans have already had access to Resident Evil 7 Biohazard earlier this year and The Evil Within 2 brings the same amount of suspense and action. It’s an extremely successful horror game that you can enjoy for many unnerving hours. Almost on all fronts, the game is better than the original. The game looks better, plays better, includes a massive open world and has a much more interesting story. In a time when publishers focus primarily on multiplayer action with loot boxes and microtransactions, Bethesda is happy with an old-fashioned single-player horror game. In short, an excellent game for horror fans.