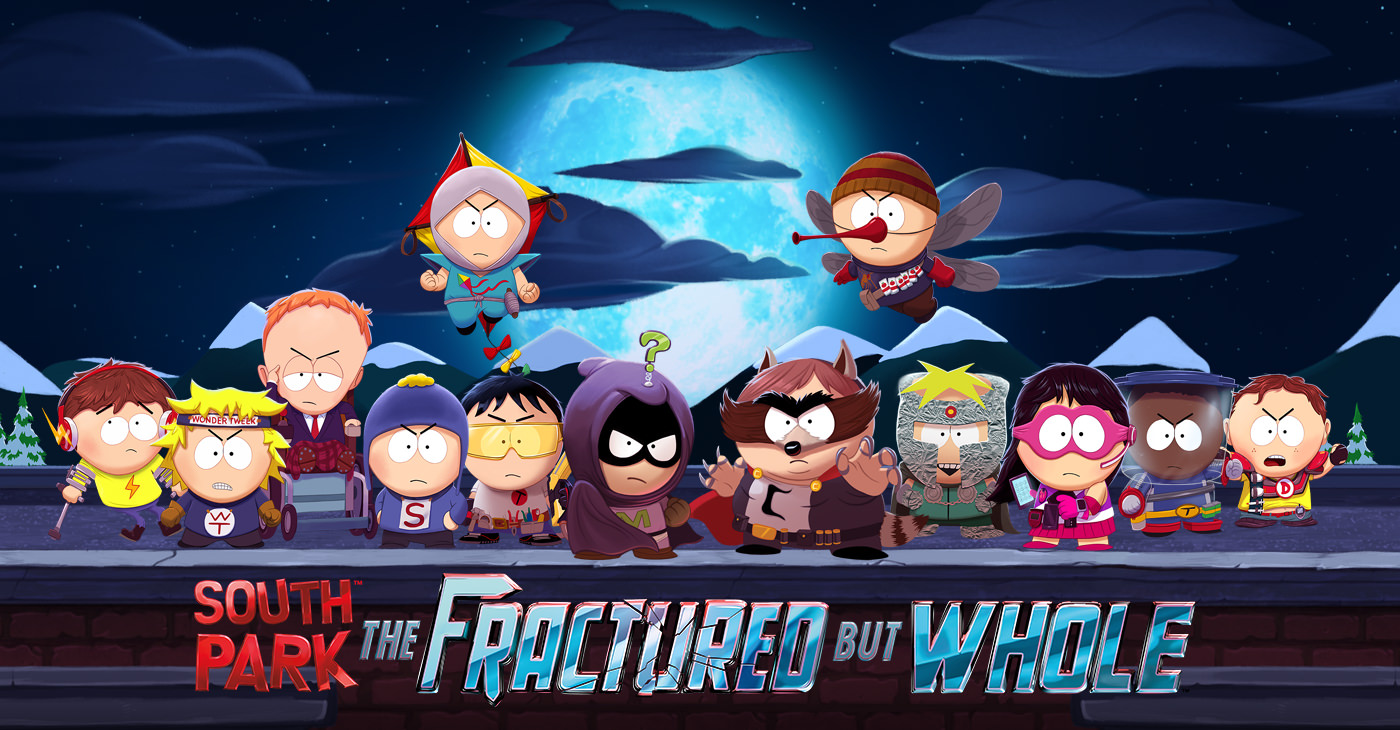 The long-awaited sequel to 2014 hit, The Stick of Truth is finally here. Since they announced that a sequel would be coming, Ubisoft San Francisco has been working closely with Matt Stone and Trey Parker in order to bring you the most authentic South Park game ever made. This makes South Park: The Fractured But Whole a better game than TSoT.

What does every superhero need?  A hilarious origin story of course. It’s given to you by The Coon and involves walking in on your dad f*%$ing your mom.

Like the first game, you start as the new kid in town but instead of playing Dungeons & Dragons, your friends have moved on to superheroes and villains.  At the start of the game, you decide what your character will look like as. But don’t worry, you can change your costume throughout the game as you find new appearances, or craft new costumes as you find loot. This can be done through the menu on your phone at any time. What you look like won’t affect your characters stats, so go nuts.

Through the character sheet, you can decide your characters sex along with whether he/she is gay, bisexual or straight amongst others. This can also be changed anytime throughout the game. Just visit Mr Mackays office to change. If you want to change your race then a visit to PC Principles office.

What does every superhero need?  A hilarious origin story, of course. This is given to you by The Coon and involves walking in on your dad f*%$ing your mom. The origin story is also where you learn the basics of the new fighting system as you fight against three burglars in the middle of the night. Once you work your way through, you then select your class of superhero. At the start, you can choose from just a couple but throughout the game, The Coon will allow you to add more to your character. You can also change class by visiting the coon lair anytime in the game. There are few things in this world I hate more than selfies and so of course, you have to do it in TFBW. Using Coonstagram you must take a number of selfies with strangers throughout South Park so that The Coon will let you join the superhero collective, Coon and Friends.

One of the more controversial aspects is the difficulty setting. The darker a tone you choose for your skin, the harder the game becomes. However, this doesn’t affect fighting difficulty but it does change how characters around South Park react to you.

After a while the fighting in The Stick of Truth became monotonous. For all of its good bits, the fighting system needed to be overhauled and given more depth to warrant a sequel. That’s exactly what they did and it definitely improves the longevity. Not only has the fighting system changed but they’ve also changed developers. Obsidian Games developed TSoT while the sequel was moved in-house at Ubisoft and given to their San Francisco team. 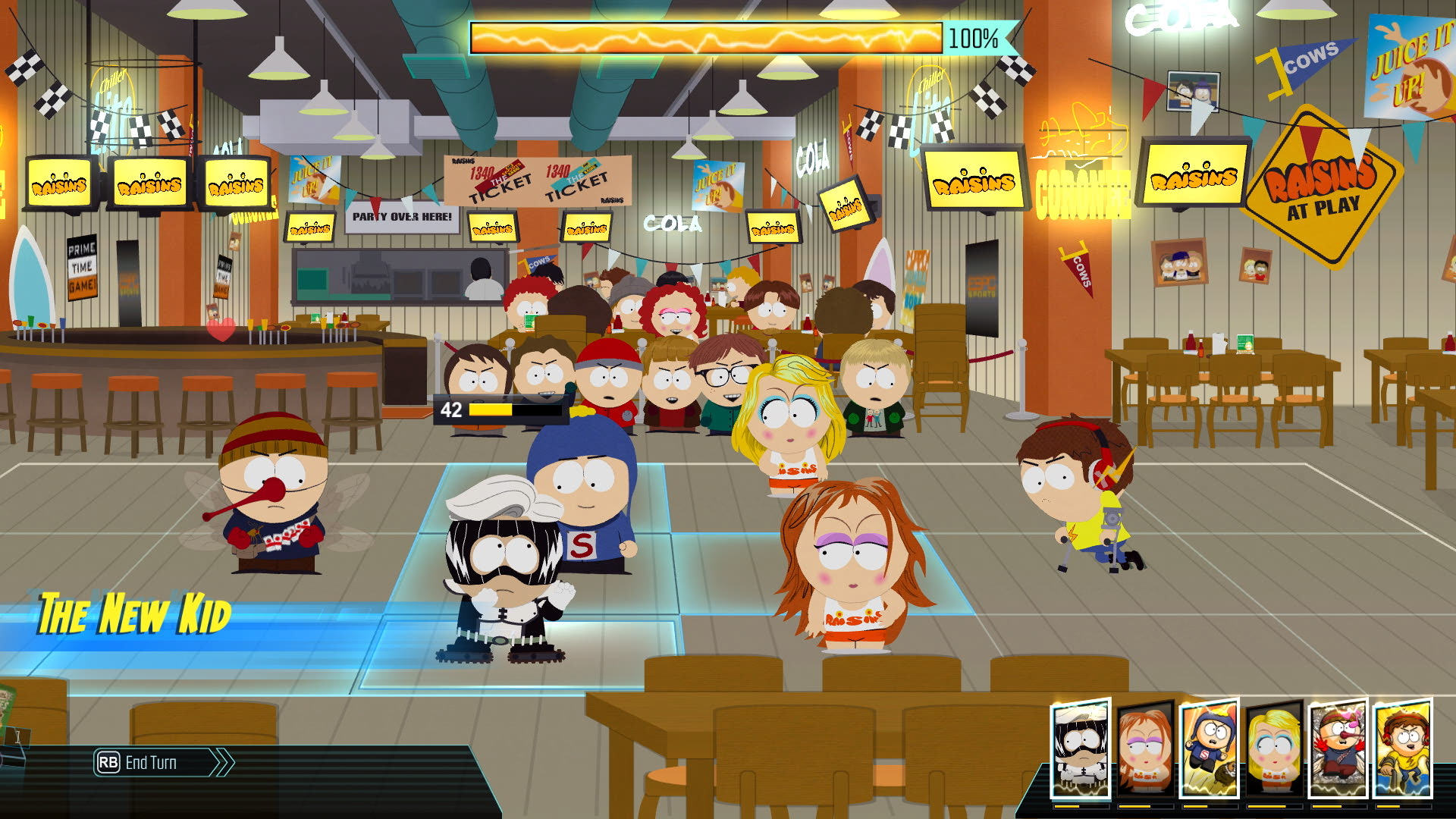 They’ve brought in what they call a tactical turn-based fighting system that makes you think much more than the previous game. Crates and other object litter the fighting zone and can be used as a barrier between you and your enemies. Also, a new handy feature is that if you find the fighting difficulty too easy, you can increase the difficulty in the options menu.

Keeping your character alive makes much easier as he has a special ability to bend time with his farts which makes your enemies lose a turn. He can also freeze time with his farts for a few seconds which allows you to punch your enemies while they’re frozen. It can also be used to get past harmful obstacles throughout the game. You learn about your fart powers through creating different concoctions of Mexican food. These unique skills are shown to you by none other than Morgan Freeman. 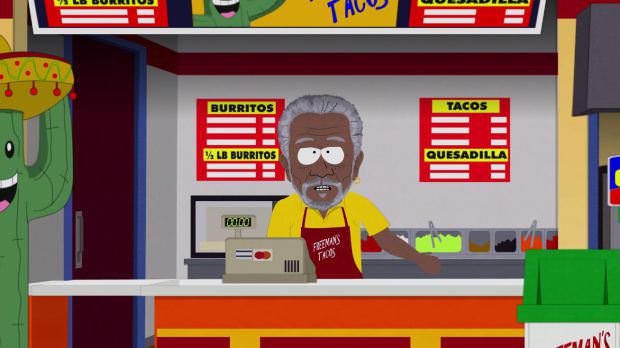 Each of your powers has a certain range. Some will work over 3 squares while most will only work over one. Some powers also have the potential to knock back your opponents. Certain powers also deal damage over a number of turns whether that’s through electricity, fire or bleeding. Each character also has an ultimate ability which does extensive damage to your enemy. The ultimate ability changes depending on your class and what character you choose to use it. My character is part cyborg so his ultimate power was having an arsenal of machine guns and lasers which lay a path of destruction to the surrounding areas. Because a player can change class, there is a tonne of different powers for them to discover – ending up with as many as 4 classes at any one time.

Certain long-range attacks from your enemies can take a couple of moves to happen. An area of the board will be highlighted red for a couple of moves. Make sure that your characters aren’t in the red zone or you could get a balloon full of urine thrown at you which will cause your characters to be grossed out leading you to lose health over a number of turns.

The Story So Far

The game starts with the boys arguing about the direction in which the Coon and Friends are going. This ends up with a group of them including Kenny and Stan heading off to form their own superhero team, Freedom Pals. Both Coon and Friends and Freedom Pals are in a battle to find a missing cat with a reward of $100 at stake.

You are able to explore the town freely during the day completing little side quests if you want. Each night marks the main plotline that progresses the main story. If you want it to be night time all you have to do is head to bed to pass the time.

The first night mission involves sneaking into the local strip club in order to find out info about the missing cat. You try getting in the front door but you are eventually thrown out by security. You then solve a puzzle around the side of the club and sneak in the bathroom window. Once inside you end up giving a lap dance to two drunk businessmen while farting on them at the same time. It’s classic South Park.

Once you get the required info, you have to find a stripper by the name of Classi. In order to get to her, you have to battle through a number of strippers before meeting the behemoth that is bootay. It only gets worse from there….but in a good way. For more info on South Park: The Fractured But Whole please visit their website.

South Park: The Fractured But Whole is a high quality follow up to The Stick of Truth. The improvements in the fighting go a long way to righting the wrongs of the first game while the script that Matt and Trey created is classic South Park. It’s what everyone wanted, a 10-12 hour episode of South Park with a lot of replayability. If you’re a fan of the show you’ll love it. You’ll also get a free copy of The Stick of Truth when you buy it from certain retailers. Because everyone was so surprised by just how good The Stick of Truth was, we perhaps had too high expectations for what The Fractured But Whole could be.