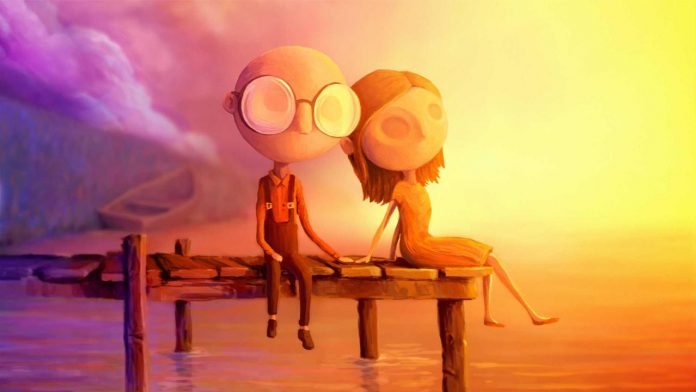 Accepting the death of a loved one can be one of the most difficult things a person has to do. They leave a gaping hole in your heart, one that can never be filled again. As time passes, many will learn how to live with the hole (which usually means thinking about it as little as possible) but life is never quite the same. Inspired by Steven Wilson’s Drive Home, Ovosonico’s Last Day of June invites the player the jump headfirst into that hole and explore the inevitability and acceptance of death in a polarizingly beautiful narrative about a husband trying to save his wife from dying in a car wreck.

If there’s one thing Last Day of June can do, it’s tug at your heart strings. The opening of the game shows us the happy couple on a serene lakeside, enjoying the sunset alongside each other’s company. The wife is visibly excited about giving a present to her husband and telling him that she’s pregnant. Suddenly, a storm rolls in. The happy couple decides to go back home. On the way back, their young child wanders into the street trying to recover his ball, forcing the husband to swerve the car off the road (causing the wife’s sudden and untimely death).

You play as the husband after the wreck. He’s become paralyzed and has yet to remove any traces of his wife living in the home, despite a presumably significant amount of time having passed (I make that assumption on the sole basis that the house has been modified–most notably the stairs–to be handicap accessible). One night, he feels strangely drawn to some of the paintings his wife made of herself, their son, and their neighbors. Suddenly, he’s taken back to the day his wife died and is given control over everyone in the neighborhood. Playing as 4 different members of the neighborhood, you’ll solve puzzles and try to alter their events that day in an attempt to save his wife.

Every time one problem is solved, another appears. For instance: You can prevent the son from chasing his ball into the street if you get him to fly a kite instead. But if he’s flying a kite, the neighbor woman can’t use that rope to tie down some boxes she has in her car. With no rope to keep them secure, the boxes will fall into the street which results in, yet again, the husband swerving his car off the road and the death of his wife. Your goal is to find a golden combination of events that won’t result in the death of the wife, despite how fate itself seems to be fiercely against you.

“[Last Day of June] honestly feels more like an interactive piece of art than a game at times.”

The narrative takes center stage of Last Day of June, leaving the puzzles to fade into the (beautifully stylized) background. They’re by no means difficult–in fact, they generally have pretty obvious solutions. If you were looking for a challenging game, Last Day of June won’t scratch your itch. But honestly, I think the simplicity of Last Day of June is one of its best assets. It allows you to focus on the narrative, wherein most of the meat of this game lies anyways.

The other bit of the meat is in Last Day of June’s jaw-droppingly gorgeous, stylized visuals. In fact, I’m going on record saying that the amount of style Last Day of June fits into its 3-4 hours even rivals 2017’s other aesthetic prodigy, Persona 5. Last Day of June combines handcrafted looking shapes with very generous, painterly color palettes to create an aesthetic wholly unique unto itself. If you’re an illustrator or have any interest in the visual arts, you owe it to yourself to play this artistic study of a game.

Where the meat isn’t, though, is its fatal flaw: Repetition. This seems to be a common critique for this game, but you’ll be watching the same scenes over and over. The game does attempt to combat this by allowing you to skip the introduction scenes to each character’s story every time you re-enter it (I’m especially grateful that you don’t have to repeat the bird puzzle when you re-enter the hunter’s story) but there’s still a lot of repetition to be dealt with like watching the wife die or watching what happens to the neighborhood at the very end of the game. If there were an option to skip scenes you’ve already seen this already good game would instantly be 10x better.

In a year that’s been chocked full of some incredible indie titles, Last Day of June stands out as a visual masterpiece with a bittersweet, song-inspired narrative about coping with loss. It’s a game with a lot to say and manages to say it all without any dialogue. It honestly feels more like an interactive piece of art than a game at times. It’s not a perfect game, but for the gamer looking for something that might make them cry, an interesting narrative, a game about dealing with loss and the inevitability of death, stylized visuals, or even just something short and charming, Last Day of June is 100% worth playing.