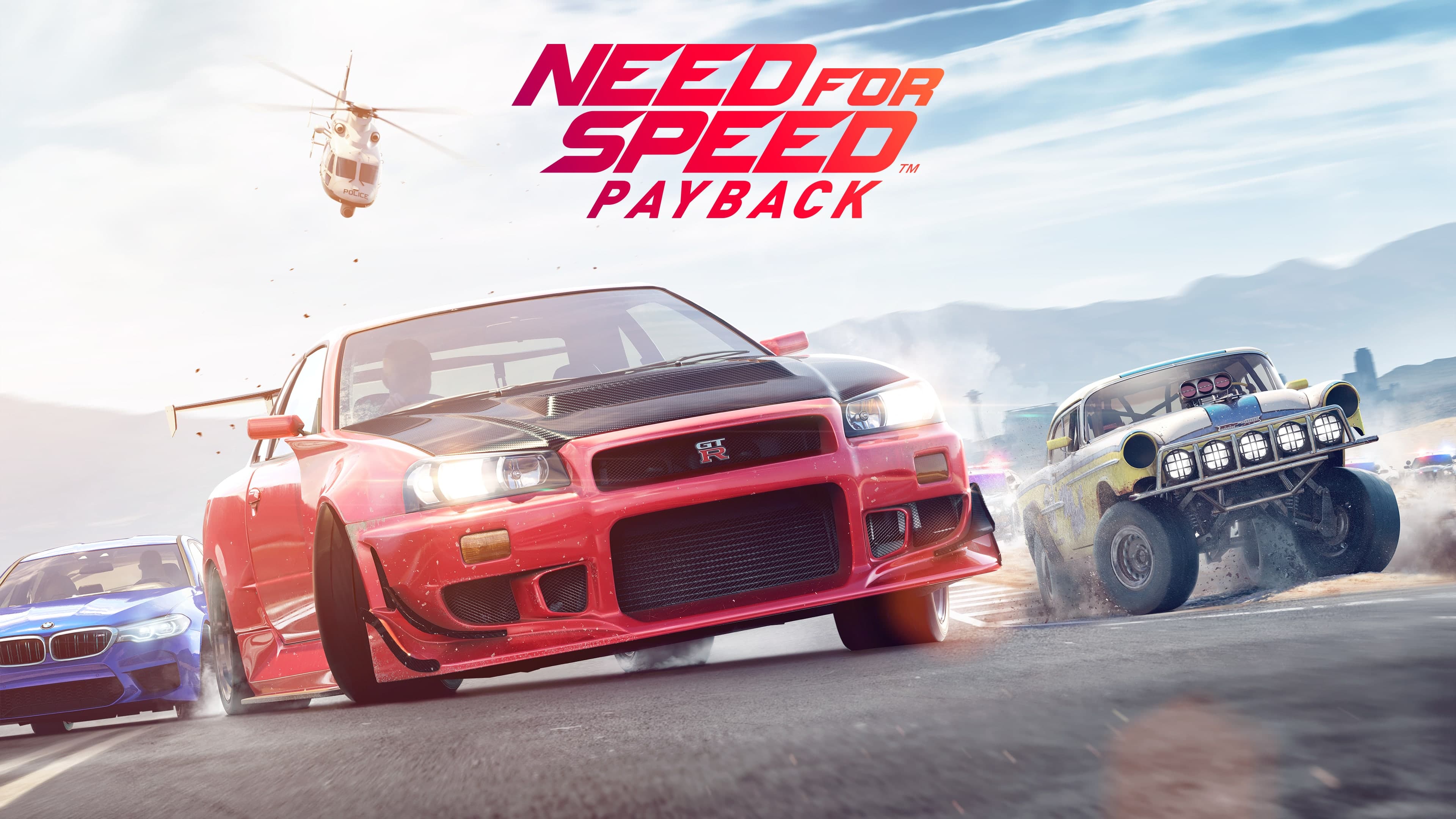 Need for Speed is not the draw it once was. The series has been going for 23 years now and for last decade seems to have been running on fumes. While the series never dipped into abysmally critical ratings, NfS became tired and stale compared to casual upstarts like Forza Horizon and now-dead BurnOut. Need for Speed: Payback hopes a brash action-movie mixed with blackmail and grinding will resurrect the franchise.

Payback is a far more financially-oriented game than its predecessor in many respects. From the by-the-numbers story and safe visual style to the insane upgrade system, the game seems like an accountant’s revenge for the bohemian and poorly-selling Need for Speed (2015). The last effort was a refreshingly different game that had a unique and Marmite-esque aesthetic mixed with a preposterous driving engine, designed to make you feel like a street-racing legend. It felt like the studio had a freer rein and I, for one, enjoyed it.

the true villains [in NfS:Payback] are a faceless gang of crooks becoming wealthy through dodgy gambling practices. I am not sure if this level of Kafkaesque irony is sustainable in the gaming industry nowadays

The upgrade system in Payback requires a player to stop by a garage every ten minutes to check for new cards to buy and condemn themselves to power-up every vehicle incredibly slowly OR take a spin on a random chance for any hope of reaching the vehicular performance required to complete the game without grinding or artificial time-sinkery.

The tokens for the random chance game can be earned by racing, trading in the many useless cards you will receive or through another random chance game. It’s also worth noting that you gain tokens far more quickly through these loot-boxes which encourages a player to use this method.

These loot-boxes can be earned in-game or bought for real money. Oh, dear.

There are many missions that are effectively locked off to players until they level up their vehicles as the requirements become very steep towards the middle of the campaign. A player will also require a car for each category (race, drift, drag etc) and plenty of points in the campaign require defeating two or more categories of racing league. Trying to force a few bob to avoid single-player grinding is quite bad on its own but there is also a multiplayer campaign to feel robbed over. Pay-to-finish and pay-to-win in one game is probably giving Martin Shkreli a capitalism-horn in prison as we speak but not many other people will appreciate any of this. The skeevy tactics or the mental image of Martin Shkreli.

The game suggests, nay instructs, a player to repeat races for cards. It even gave me a cheeky 25G (gamerscore4lyfe) for, their words, grinding.

I almost forgot, there is a driving game here also

The British lad, Mac, seems written by an American who learned British English speech patterns and colloquialisms from a single issue of FHM magazine

The campaign starts off with a crew of young drivers who exist to take down the ‘House’. Why the House is bad is made perfectly clear but it’s hard to care too much. Our protagonist is made an offer he can wholly refuse, albeit with a little difficulty. He then has to act as a wheelslave/car thief. The plot is essentially a series of street leagues, moving your crew up the food chain until we can take the ‘House’ on – I still have no idea how I helped solve Fortune Valley’s woes by racing people but I did, aye.

There are some enjoyable races and set-pieces along the way and the game does use its many scripted moments well. If you don’t like them in principle, soz. There are usually a few in every campaign mission and they lend a vacuous blockbuster action-movie feel to Need for Speed: Payback that hits the mark visually. Moments when a player is sucked into main campaign missions and not grinding their way to competitiveness are slick, fun experiences. It’s just a pity it has been diluted this much.

Main prote Tyler is the most boring character in the game and acts as a realistic anchor amongst the central trio’s cartoonier character line-up. The British lad, Mac, seems written by an American who learned British English speech patterns and colloquialisms from a single issue of FHM magazine. The American woman, Jess, is very sarcastic and denigrates her team-mates endlessly – the annoying character-type you found in all 90’s teen/young adult TV shows. All she needs is a little brother to chase out of her bedroom. Genuinely awful.

Our blackmailer/semi-villain/cola aficionado is just about the right mix of Martin Shkreli and someone who wasn’t bullied at school and is probably the best character in the game. However, the true villains are a faceless gang of crooks becoming wealthy through dodgy gambling practices. I am not sure if this level of Kafkaesque irony is sustainable in the gaming industry nowadays.

Need for Speed: Payback looks pretty good on Xbox One X, the game runs at smooth 60fps throughout and the environments have the variety and quality to recreate a wholly believable world to race by. Vehicles aren’t rendered to the same nigh-on obscene levels of Forza Motorsport 7 and they don’t consistently degrade visually upon collision but they still look excellent for their purpose.

There is a photo mode to create some visually appealing shots for your internet ‘friends’ to ignore. This games gasbag wasted far too much of what little remains of his drab and wretched life logging Need for Speed: Payback’s handsome environments.

Den of the Thieved

A player can compete with other players in ranked and casual races set up in Speedlists of five events-per-list. It’s not so bad until you consider the game’s vast array of vehicles and parts are carried from single-player. While this is a usual practise in racing games, doing so when the cars and meaningful improvements are locked away as they are behind random chance and grinding is horrible.

Need for Speed: Payback is lucky that Battlefront II exists

When Need for Speed: Payback is gracious enough to let a player compete in its best events, it can be an exhilarating ride. But with so many issues around how one gets there, the experience is tainted. With a shrewd focus on grinding vs. microtransactions instead of a natural rollercoaster through the open-world and its campaign.