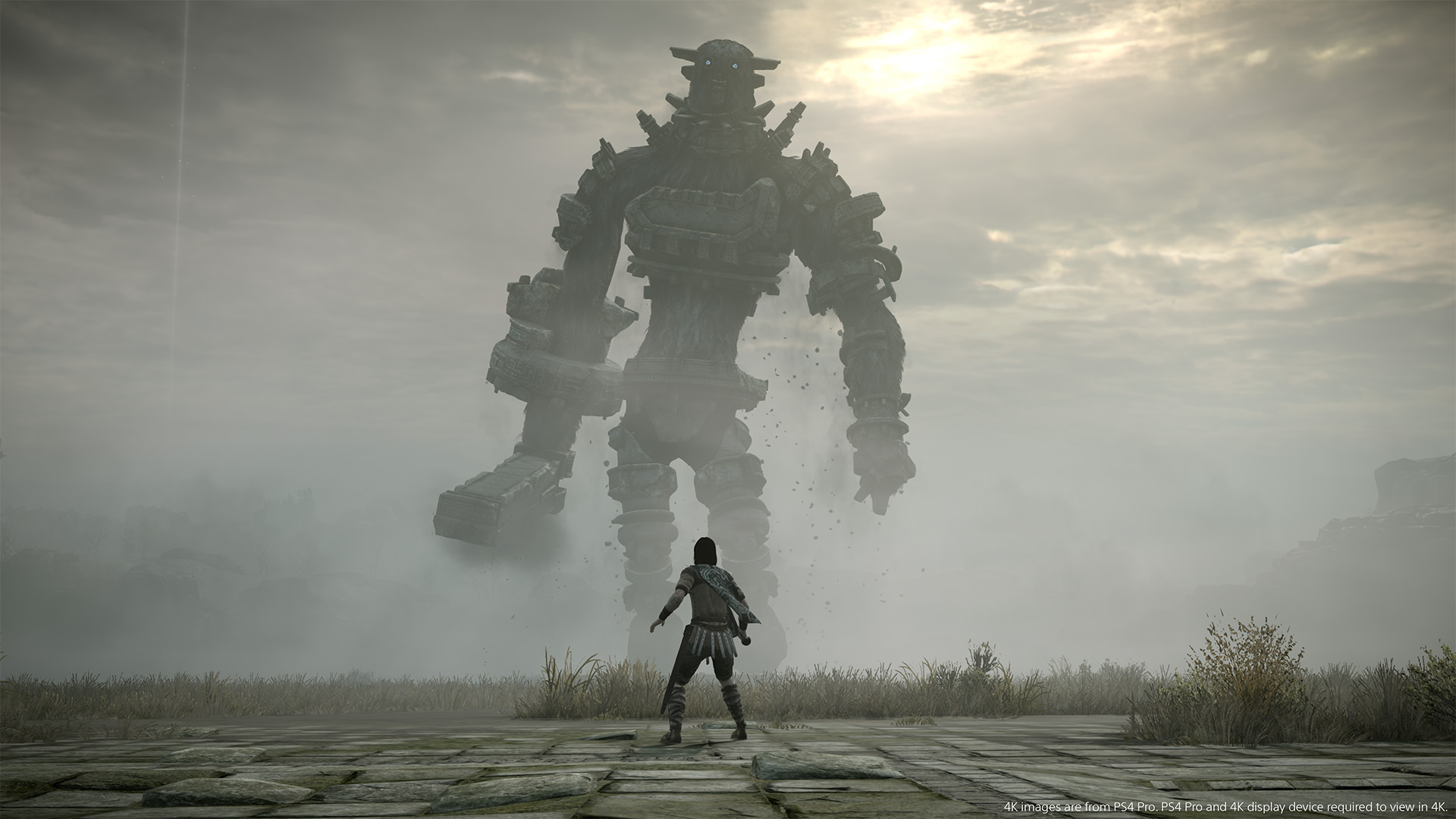 For what is likely to be the last time, Shadow of the Colossus has been awoken from its PS2 slumber and brought to the PS4, and doesn’t it look pretty. Bluepoint Games, who remastered the Nathan Drake Collection have done a superb job in making Shadow of the Colossus look like it belongs on current hardware. In fact, this game looks A LOT better than The Last Guardian.

Ignoring a Colussus for a Decade

If, like me, you’ve never played Shadow of the Colossus it’ll take you a while to get your head around the style of the game. It is, without doubt, the emptiest world this young games rent-a-word has yet seen in a video game. Normally that would be a bad thing but it works here and adds much to the atmosphere of your quest.

And what is that quest I speak of? Basically, you have to bring a girl back to life and the only way to do that is to defeat all 16 of the Colossi with your magic sword and bow. Along with your trusted steed, Agro, you will hunt down each colossus in an attempt to revive the girl. Each Colossus has its own strengths and weaknesses so it’s up to you to find what they are and use them to your advantage.

Visually, it’s a remarkable upgrade from the original PS2 version as well as the HD remaster that released on PS3

Stabbing on the Shoulders of Giants

The game does a great job of starting you off with a nice easy one. Each colossus has some part of its body covered in fur – the first has it around his ankles so there’s no need to use the surrounding environment to gain an advantage. Just climb up the fur until reach the colossi’s weak point. The weak points can be located by holding your sword up to the sun and then focusing that light on the weak spot. Stab the weak spot 4-5 times and you have defeated the first colossus. Just another 15 to go…

Visually, it’s a remarkable upgrade from the original PS2 version as well as the HD remaster that released on PS3. Bluepoint has used Ultra HD assets which make the visuals pop. However, there is a fair amount of less admirable ‘pop’ in the backgrounds. Looking far off into the hills the terrain is very bland and plain with no noticeable grass/ plant life. But the closer you get the more pop in you’ll see. The textures of mountains in the distance, however, don’t suffer from pop in, so the textures look outstanding. Foliage is incredibly rich and you spend a long time just riding through the forests admiring the scenery. A volumetric lighting system has been added and this system is especially noticeable when sunlight pierces the archway in the central temple or peers through the tree-line of the forests.

Remaster the controls while you are at it…

One area where remasters often struggle is in game mechanics and unfortunately, this is exactly where Shadow of the Colossus shows its age. The climbing mechanics and animations leave a lot to be desired. Going from playing Horizon Zero Dawn to SotC is eye-opening. The climbing mechanics are clunky AF and given that it’s such an important part of defeating each colossus, it’s disappointing that more wasn’t done to improve this. I played SotC on a standard PS4 so the performance is capped at 1080p and 30fps. It’s disappointing when you consider much more recent games that have been ported to the PS4 have achieved 1080p with 60fps with ease on a base PS4.

After defeating the first 5-6 colossi, it gets repetitive incredibly fast and it will be a struggle for those who have no affinity for the series

Controlling Agro can also be a bit of a chore. Constantly having to have your finger on the triangle button to keep up speed while then holding R1 to lift your sword and then using the right analogue stick to point it in the right direction. It’s easier said than done. There’s no UI on the screen which is both a blessing and a curse. The number of times I couldn’t find the entrance to a cave to fight a colossus was infuriating. It was a nice change of pace though from what seems to be a growing need by devs to have your screen covered in crap. I wouldn’t have minded a little map in the bottom corner of the screen instead of having to press the touchpad. It breaks the whole flow of the game having to exit gameplay.

We’re not going to talk about then ending because clearly there will be gamers who’ve never played the PS2 or PS3 version. In all honesty, Shadow of the Colossus simply never grabbed me the way other games those generations had.

After defeating the first 5-6 colossi, it gets repetitive incredibly fast and it will be a struggle for those who have no affinity for the series. Because I never played the previous versions of Shadow of the Colossus, I am surprised that teh_interweb knows this as one of the best PlayStation 2 games ever made and can’t see past this game’s glaring faults despite the immense line-up of titles it competed in.