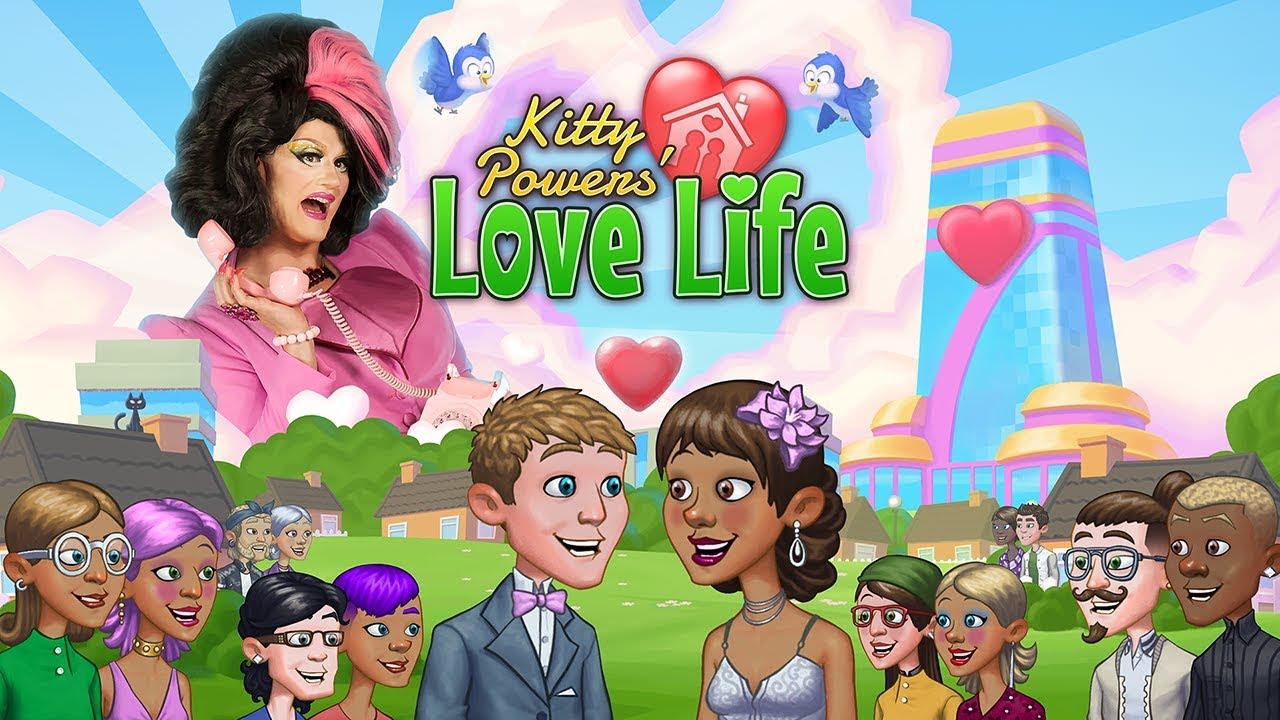 If seeing others fall in love or do sex stuff makes you happy instead of filling you with contempt, then you may have played Kitty Powers’ Matchmaker a few years ago. Kitty Powers’ Love Life is a spiritual successor to KPM – the singles have now coupled up and it’s now the player’s responsibility to bring that initial coupledom all the way to marriage inside the confines of player-built love village.

It’s basically a love strategy game. Like a PG Ganguro Girl mixed with Tropico 5 but with a drag queen as El Presidente and break-ups as the US/USSR invasions. Kitty Powers’ Love Life has elements of city-building, dating-sim and god-sim mixed into its cabaret act.

While Kitty Powers herself is an unknown quantity outside the United Kingdom, Kitty’s creator has quite the pedigree in gaming. Rich Franke is better known worldwide as an artist for Tearaway and the Burnout and Need for Speed series.

Franke’s alter-ego, however, is a UK star in her own right. With the return of drag artistry to the mainstream in the past decade, Powers is the English Panti Bliss or Ru Paul. Names that transcend the drag scene, institutions of the current era in their respective countries.

A player starts with character creation, a humorous quiz then your seed couple. The subsequent tutorial is excellent. The entire game cycle is introduced to players before the stabilisers come off. Franke/Powers had the casuals in mind with this one.

As each day passes, villagers will go about their lives. The schedules and logic on which villagers run their lives never impacts the game beyond the timing of events such as meeting with Kitty or love-building excursions. Instead, learning the preferences and pet hates of each and scheduling various activities around these will make designing your town easier – happy citizens need less stuff.

Along with chit-chat, a player will fix domestic dilemmas with minigames and advise villagers from Kitty’s office office in Kitty Towers. The mini-games are usually relevant to the domestic situation. They are even if they are very easy and wholly derivative.

The advice section is more chatting, guided by our growing knowledge – the balance of dating-sim-style discovery and memorisation with minigames and city-building is actually quite good.

Leveraging cash rents against improvements to the love village is probably the least challenging aspect of Love Life to begin with. Economy slowly grows in importance as a wider variety of Villager comes to live there.

Players discover the character traits of each couple through dialogue choices, seeing what they spend their time doing and how they feel during trips or dates to certain venues.

Another area in which the intimate details of each villager’s life is useful is during the seemingly random challenges that a player will help couples negotiate. Chat-based minigames will make or break your couples – being able to answer correctly here will quickly max out the love or finalise a proposal. This means more marriage proposals and less coin spent building museums, pubs and secret society sex-dungeons.

every single euphemism in the UK English lexicon seems stuffed into every orifice… Ooh, Matron

Fitting the maintenance tasks in around planning and city-building is not difficult. Days are long enough and can be fast-forwarded to get things moving. Town-building takes a backseat to begin with so the game allows a player to learn the other mechanics first before ruining their game with poor construction choices.

The game as a whole is well-designed and thoughtfully laid-out. Sometimes folk don’t appreciate that as much as they should in a game of this type so I will mention here. Good job. (Pats bum)

Even though I am from and live in a different country, I have spent most of my life watching UK television/film and have many, many English cousins. For a game that advertises itself as British-humoured, it seems a little forced to me.

As if a foreign investor demanded “more Britain please”. Ev’ryfin’ is phone’ically rendered, innit. This wouldn’t be a problem if most of the game’s dialogue wasn’t text-based. This games dolt has watched many episodes of Eastenders in his drab and wretched life so listening to a pantomime Liza Doolittle is no big deal but having to read it gets tiresome.

Similarly, the humour is “Carry On” grade – definitely funny to many in Britain and Ireland but it’s overused. Instead of a healthy drizzle of choice double-entendres, every single euphemism in the UK English lexicon seems stuffed into every orifice. Ooh, Matron.

As niche as the game is, there is a lot of thought put into Kitty Powers’ Love Life; it’s well-made and quite deep. For fans of dating-sims and casual god-sims, it’s practically essential. Its clever design and gentle introduction to its moderate complexity make it a good choice for newcomers to the genre or gaming in general.

But Kitty Powers’ Love Life is not going to bring a mainstream audience outside the UK into dating-sim fandom.