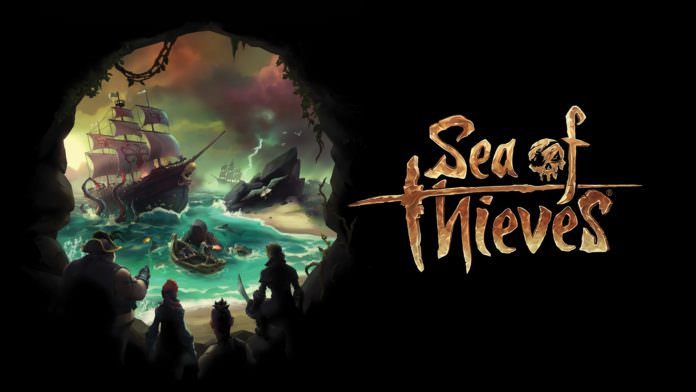 Sea of Thieves is a colourful pirate adventure where you go loot with friends and compete against other players. I played the release version with a few loyal shipmates to find out if the game is only a short-term comedy affair or if we can expect a long-term playable experience.

Sea of Thieves is the highly-anticipated multiplayer-based open-world adventure game where you play the role of a pirate. The basic goals are to plunder, defeat skeleton-pirates and rise to become the fiercest pirate on the thieving seas! In addition to the actual treasure hunt or the exciting sea battles, Sea of Thieves focuses on one major element: teamwork.

Teamwork is very important in Sea of Thieves. From the beginning, the game encourages players to play with a headset to enjoy the full pirate experience. This is sorely needed as in order to control such a large pirate ship effectively, you need several people and good communication. On a big Galleon ship, you really need four players. One player takes the wheel and steers the ship, another is needed to adjust the sails and ensure the best speeds. You also need a player watching the map and another at the helm making sure the ship doesn’t crash into any of the many obstacles plaguing the sea.

Anyone who has counted correctly already recognises the dilemma: steering the ship, navigating the map, adjusting the sails, keeping a lookout and managing cannons/livestock or any other cargo – these are already five tasks. This means that communication is essential to managing a big ship. This ensures that you are constantly communicating with your teammates. Even if you have had no enemy contact for 20 minutes, there is always something to do.

Let’s Go On a Treasure Hunt

One of the main focuses of Sea of Thieves is the search for treasure. Once the ship’s inventory is loaded up with bananas, cannonballs and planks (for repair purposes) we are nearly ready to set sail. You can purchase quests from a dealer. Starting off most of these are free and can be completed quickly. As you level up and complete more of them, however, they begin getting longer (and thus result in better plunder). In the beta, there was only the classic treasure hunt, where you usually had to find a specific island, and then solve this on a puzzle. In the beginning, the puzzles became more and more demanding as the level increased, but mostly solvable.

There are several different types of quests that you can choose. The ones I have done so far were the treasure quests and a couple hunt missions (where you have to hunt down a dead pirate captain with a glowing skull face). With the others, we also had a quest to go find a white feathered chicken and a few other things but the team was split between Discord and the Xbox Party Chat system which made the quest impossible to complete.

Once you have finished the treasure hunt you need to (temporarily) store your chest on the ship. During the beta, I played solo a lot and ended up getting my chests stolen but yesterday a viewer in the stream told me I should hide them in the crows nest as no-one looks there. That was probably the best tip I have ever gotten about a game, (that’s a lie, the best tip I ever got was how to find the singing grunt in Halo 5).

The chests can be brought to the nearest commercial outpost. If you haven’t gotten involved in a fight or have survived one unscathed, you can sell them at a trade guild. Remember to stock up on new items and buy a new order (quest) while you’re at it. The hunt missions are completed the same way, simply pick up the glowing skull from the dead pirate captain and store it somewhere on the ship. The skull can be sold the same way as selling a chest.

The game’s scenery is one of my favourite things about the game. The sunsets and lightning storms are extremely realistic and add to the whole immersion of the game. This helps immeasurably when your playing by yourself and have to sail to a far-off island. Where there is a drop of action and plundering, players can admire their surroundings. The level of detail that went into this game is immediately evident and rewarding to all players.

What makes Sea of Thieves different from many multiplayer games like Rust and DayZ is the fact that its players aren’t as volatile. In Sea of Thieves, taking on another player requires careful planning to ensure that the attacking player comes out on top. This means that you can easily play by yourself and not have to worry about a group of players who got together just to make other players experience miserable.

At Gamescom last year I got some hands-on with Sea of Thieves in the Xbox booth with some of the Elite Gamer team. The devs were great and it was clear that they really care about their community. They explained how some of their mechanics worked and how a lot of their features got developed by community support. The game also won our “Best PC Game” award at Gamescom too. The PC support during the Alpha was a large contributor to this decision.

Sea of Thieves is very much a community-driven game. From the very start they opened their game up to players to ensure became the final result is exactly what the players asked for. The forums are where a lot of the magic happened, this is where insider players came together to discuss in-game bugs, improvements and to share ideas for stuff they would like to see in-game. 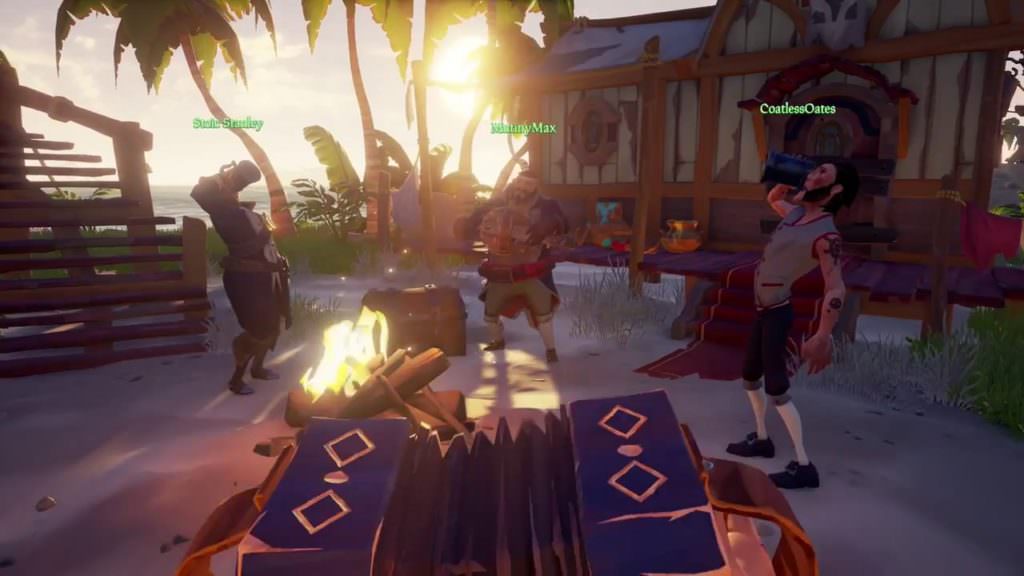 A great feature of the game is the ability to play music. Players can choose between a squeezebox or a lute (for now) and play a selection of different songs. Whats more is when more than one player is playing instruments, they all sync up and it sounds magical.

If you haven’t already, I highly recommend giving Sea of Thieves a try. It’s a great game to play on your own and an even better game to play with friends. I’ve been playing it since it’s early Alpha phase right up to the final Beta last week. What I love most is that even though I’ve been playing it for a while, going into the official release version felt like playing a whole new game. The visuals were improved and there was far more to do in the game than there was in the Beta.

The game is available now on the Xbox store and the Windows 10 store. It’s a “Play Anywhere” title so if you buy it on Xbox you can also play it on your PC. Whats more, users with the Xbox Game Pass can play it right now as well. There is even a 14-day free trial available for new subscribers. So what are you waiting for Matey? Set Sail and Ship Out!

It’s really is a great game, thanks for the review!

until you get spawned camped at your ship. the greifing will kill the game.

I’ve put at least 15 hours into this so far and this hasn’t happened to me even once. Every bit of criticism I’ve seen leveraged at this game has been gross exaggeration.

It’s all about luck I suppose? I got bored after a few hours, I really like the comparisons to NMS, at least there you had progression.

Get some friends to play with.

I just don’t like games with little to no progression, I need more depth instead of the same thing over and over 🙁 Edit: I really wanted to love this game, I had high hopes. I think in time it’ll be amazing, but I think people are too excited at this point.

the devs never said it would have progression tho theyve been honest from the start what their agenda was.

Well, the game will die quickly enough without progression

I guess, I didn’t follow it all that closely. I had high hopes but just kind of assumed it would have progression 🙁 I think based on complaints, I am not alone on this island of assumption 🙁

if you played the game alone its a total bore fest play it with friends and you wont care about progression.

Reviews are starting to drop and they aren’t good. Why are you damage controlling a shiit arse game?

Happened to me last night. Really ruined everything. 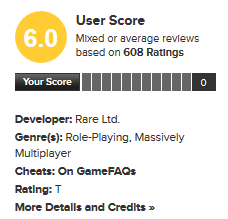 Costs 70€ and barely has content. I understood that there’s no progression. Just free roaming.

How can a game get a good review when the servers are shit?

This game is boring as fuck, what are you smoking?

with 3-4 people this game is a complete blast , no progression or traditional leveling like an rpg

just go out and kill shit get gold and have a ton of genuine fun moments with your mates.

in the time i played i had alot of moments that i wont be able to replicate , and tons of laughs … the

devs didnt sell us a destiny story with this game they basically said what this game would be.

Behold the incredible irony of hashtagging Buy God of War, an unreleased game, while calling out fanboyism.

Gonna love these fanboy idiiots that put out fake reviews like this.

every day proves it more and more. just wish people would wake up. no reason to own an xbox.

Game is a 6 user score and getting 5.5 from reviewers. Sounds like someone is a fanboy. It’s FTP trash disguised as a $60.00 game. MICROTRANSACTIONS are coming! No mention.

My comment disappeared so again, how is the fact that the servers are a mess not being discussed?

How exactly did you have time to review the game the day it came out?

Because I had access to it before the official release, review keys get sent out prior to the release date so that reviews go live on day one.

seeing more reviews pop in, how do you feel about being basically the only positive score (and a 9/10 at that), do you feel like the game really clicked for you? or… is there a reason for such a difference between scores? Edit: no hostility just kinda curious if sometimes you look back on reviews and say “huh, maybe I should’ve given it more/less”

I’m sorry this review is overscored and poorly written no negs whatsoever. For a early access barebones game. It reviewers such as this why we get unfinished games..

He not really score this game in the state of an early access game, but what it will become in 6/12 months time. Me thinks. 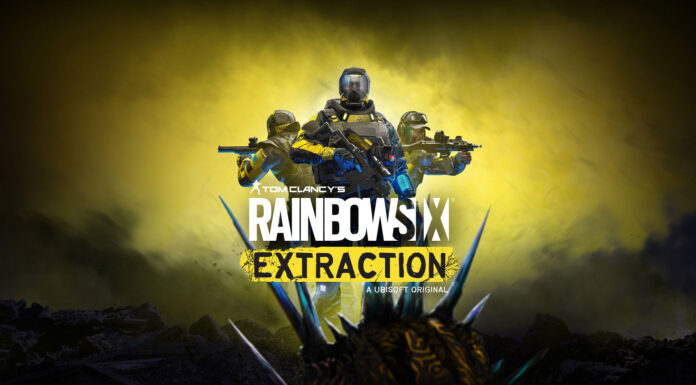