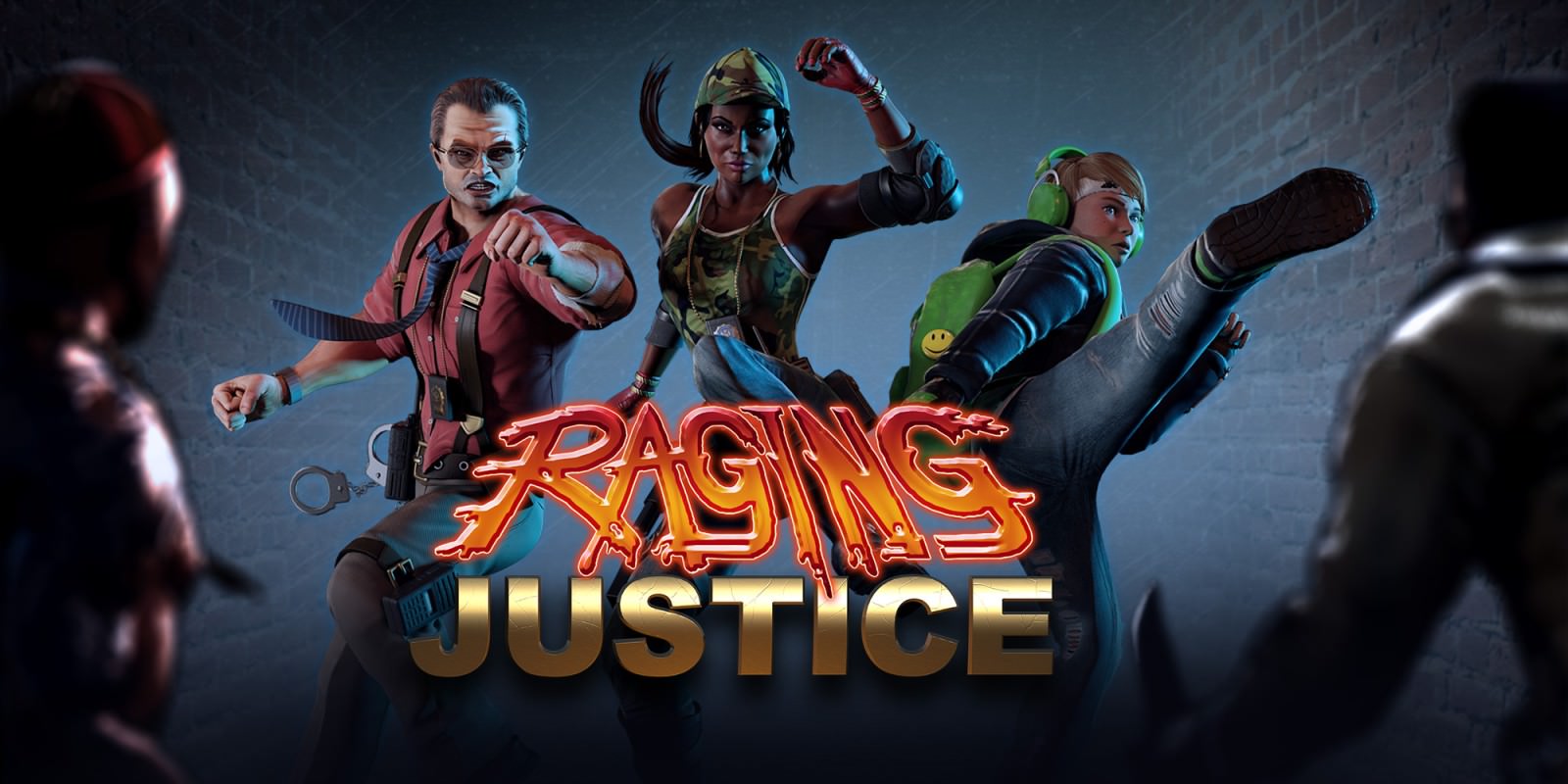 This writer just about remembers his Mega Drive days and how care free parental supervision was In the glorious 16 bit era. Knife fights, exaggerated violence and finishing moves that ripped players enemies apart in a shower of glorious crimson seemed to be invisible to my parents. But then again, the Mega Drive II was a great tool to stop me from mithering them. Being a father of two, one can dig that. However these days such behaviours doth butter no parsnips, I wouldn’t dream of exposing my kids to such gore and violence until they could at least defend themselves with a sharpened sippy cup or a hazardously sharp folded straw shank. Readers, I digress, enter Raging Justice.

Raging Justice harkens back to the side scrolling beat-em ups of old such as Streets of Rage and Final Fight whilst brandishing sprite animations in vein of the Original Mortal Kombat series (No, WordPress, it’s actually spelt Kombat!) The frame rate is lovely and smooth throughout with no frame-drops whatsoever. Faster moves are gifted with a very subtle motion blur which works surprisingly well unlike other bit style titles that employ more modern special FX. 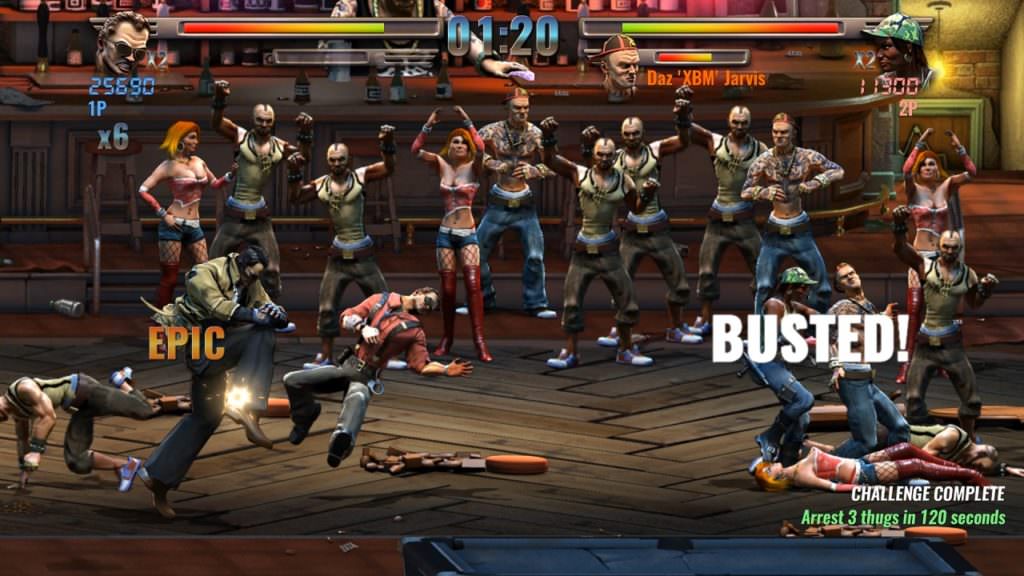 Also, this reviewer would like to mention the soundtrack earlier than usual this time round because its frikkin’ epic. The ’80’s bad cop’ vibes all the way though, solos included to extrapolate the solemn awesomeness of bringing the fight to the bad guys down town. It employs a polished bit chip tone with synthesised electric guitar; like listening to a guitar tab on Songster (Gaming Editor: that reference is dope, yo).The sound effects are also reminiscent of the aforementioned Mega Drive classics with grunts, motorbike sounds, pan lid impacts for every form of contact etc.

I would just like to give a special mention to the title screen starting with a ‘Stone Cold Steve Austin glass smash’ with the logo bursting onto the screen with our heroes stood in their relevant fighting stances; brilliant. The overall vibe of the game is ripped straight from an arcade cabinet with its flashing ‘Press Start’ icons, credits counters which deplete when you run out of lives and a video reel of various levels and situations to show of the game play. In fact, I’ve got It running in the background right now just because I love the nostalgia!

one boss is a pimp that spins around the area, stick in hand. When not being a Beyblade, Mr. Pimp actually pimp slaps you for his normal attack

Local Co Op is exactly how it was back in the day but with smaller controllers with no wires, runs without a hitch! Players have the choice of three difficulties ranging from ‘Wimp’ to ‘Tough Guy’, this writer chose normal because he doesn’t entertain the idea of being buggered by a video game. Players also have a choice of three characters:

Rick Justice: I feel I have to include his bio for its badarsery – “A veteran cop from the old school, Rick doesn’t play by the rules, but he gets results!” Rick is a typical hard-punching brawler type.

Nikki Rage: Nikki’s bio doesn’t match up to Ricks at all, but she is ex-military which means she’s the middle ground of the bunch delivering precise blows with moderate damage and average technique.

Ashley King: He looks like that little s**t kid that hangs around near your house on summer evenings that you sometimes veer towards when driving out. But he is my favourite fighter as he is rapid. Like Eddy from Tekken, fast but not a cop out.

Players can get their enemies to the point of knock out and arrest them for good cop points or tune them up for bad cop points, this writer honestly knocked everyone the fuck out! Your enemies are blatant smack head grunts, prostitutes, very muscular chaps or morbidly obese gentleman. Oh and dogs, there not the nice kind! Each with their own bit of style and annoyance, it is critical to pick up on their moves fast to avoid a stun followed by a barrage of fists, feet and axes. The weapons are quite varied and include knives right up to short swords; I’ll leave it to your imagination. At one point a tractor is the greatest offensive weapon. Yep, that’s right; a tractor. 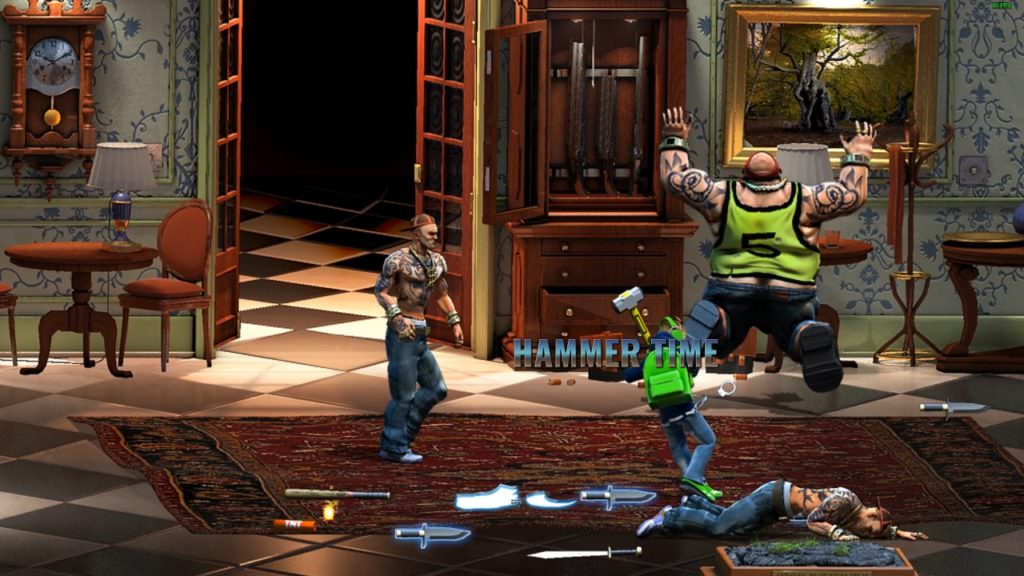 Health drops are in the form of full roast turkeys, sandwiches and the like as standard but questionable when found in a sealed barrel. The boss fights are also quite engaging and will have players on pins. For example, one boss is a pimp that spins around the area, stick in hand. When not being a Beyblade, Mr. Pimp actually pimp slaps you for his normal attack and gets his ladies of the night to sort you out. Erm… I mean beat you up and stuff, don’t be so crude.

Raging Justice is a solid side-scrolling beat ’em up. Although its influences may be obvious and it doesn’t really give players anything new to feast upon it doesn’t matter. Sometimes, if something isn’t broken, smack a pimp in the mouth.